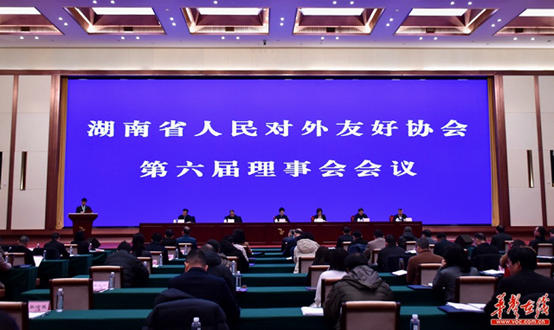 The Hunan People’s Association for Friendship with Foreign Countries (HPAFFC) held its 7thcouncil meeting in Changsha on January 7, 2021.

Letter of congratulations were also received from the counterpart associations in 30 provinces, autonomous regions, and municipalities, and representatives of international organizations and friendship cities, including Shiga Governor Taizō Mikazuki; Yukio Hatoyama, former Japanese Prime Minister and also honorary chairman of the Japan-China Association for the Promotion of “Belt and Road” Initiative; and the Association of North East Asia Regional Governments (NEAR).

The meeting elected the chairman of the 6thHPAFFC Council, and HPAFFC vice chairman and secretary general; deliberated the working report of the 5thcouncil; and, revised the HPAFFC statutes.