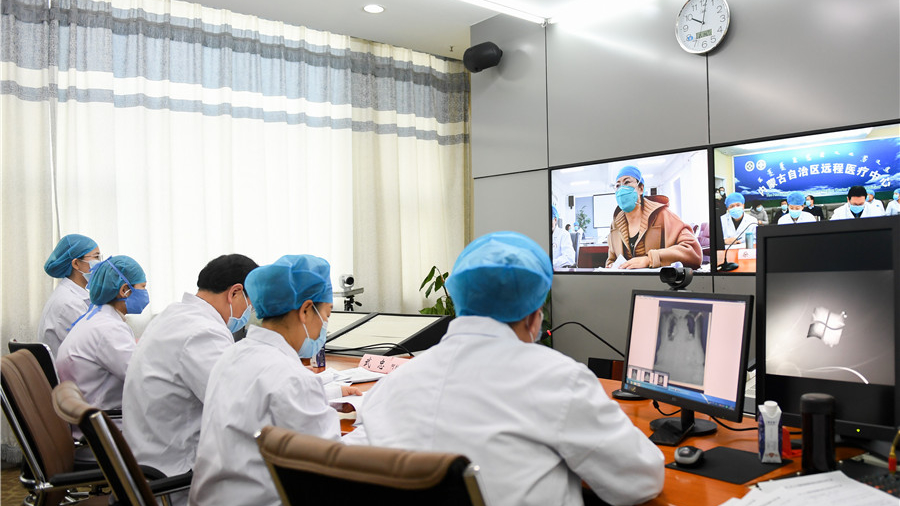 China's health QR code has facilitated the free movement of 900 million people during the COVID-19 pandemic, the China Internet Network Information Center said in a report published on Wednesday.

The report said the internet has played a key role in pandemic control and prevention, with the central government service platform using mobile technology and big data to generate color-based health codes that give an indication of people's health status.

Nearly 900 million people have registered for the code, using it more than 40 billion times for occasions like traveling between provinces and entering public places.

Demand for online healthcare and education has also been growing as a result of the pandemic. At the end of last year there were 342 million people using online education services in China and 215 million using online medical services, the report said.

Published twice a year since 1997, the report provides one of the most authoritative snapshots of China's internet development.

The latest report showed that the number of internet users in China had reached 989 million by December, an increase of 85.4 million from March last year, with the internet penetration rate among the population reaching 70.4 percent, up by 5.9 percentage points.

Because of the impact of COVID-19 last year, the new report summarized the pandemic's influences on internet development.

It said the pandemic had accelerated the digital transformation of all aspects of society, pushing individuals, enterprises and governments to become more connected via the internet.

Individuals are now much more inclined to use the internet to obtain information, do online shopping, order takeout food and run errands via applications and health codes.

As of December, the number of people working remotely had reached 346 million, with the report saying the remote working market witnessed "explosive growth" in the first half of the year. Then, in the second half of the year, the market grew by another 73.6 percent.

The number of users of WeChat Work, an instant messaging app for enterprises, grew from 60 million at the end of 2019 to 250 million by May and 400 million by December.

"The internet will play an increasingly important role in assisting economic recovery, maintaining social functions and promoting international cooperation in the fight against the pandemic," the report said.

In terms of network coverage, 98 percent of poor villages across the country were connected to optical fiber networks by November and 832 poor counties had gained access to e-commerce.

Internet coverage has been extended to 99.7 percent of primary and secondary schools nationwide, and telemedicine services offering assistance from big city hospitals are accessible in all county-level hospitals in poorer counties.