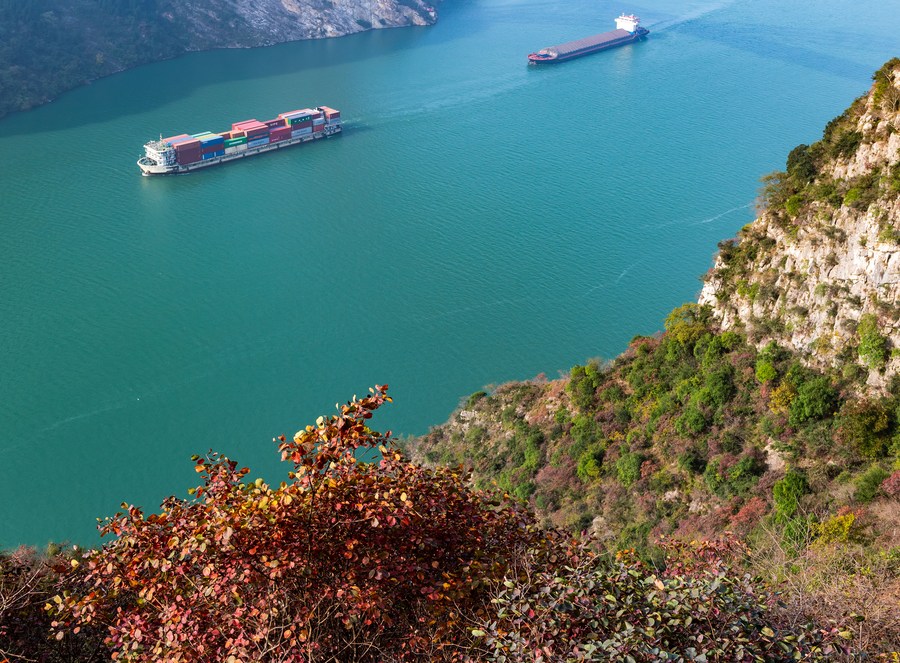 Ships sail through a section of the Xiling Gorge, one of the Three Gorges along the Yangtze River, in Zigui county of Yichang, Central China's Hubei province, Nov 29, 2020. [Photo/Xinhua]

In a rarely seen cautionary move, China's top environmental watchdog summoned leading officials of six areas on Monday for their poor performance in rectifying problems in the Yangtze River Basin.

Governments of the six prefecture-level areas failed to fulfill their supervisory duties, with problems unearthed over two years ago still evident, the Ministry of Ecology and Environment said.

The government of Shangrao, Jiangxi province, was criticized for its dereliction of duty in addressing the discharge of polluted water from refuse landfills, which was exposed in a high-profile central environmental inspection in 2018.

Staffed by ministry officials, the inspection teams are headed by minister-level officials. The inspectors report to a central leading group headed by Vice-Premier Han Zheng, who is also a member of the Standing Committee of the Political Bureau of the Communist Party of China Central Committee, the country's highest authority.

Inspectors found over two years ago that disposal facilities for waste water leaking from the Fengshun refuse landfill in Shangrao had been operating abnormally for a long time, which meant the water it discharged contained high levels of pollutants, the ministry said in a news release issued on Monday.

A rectification plan drafted by the Shangrao government vowed to address the problem by the end of June 2019. But the ministry statement said, "Investigation found, however, the problem has yet to be adequately settled."

Environmental hazards at refuse landfills in four counties in Shangrao had also not been addressed, it said.

"Using the excuse that they lacked necessary expertise, officials with the Shangrao development and reform commission, which headed the rectification work, acted as if they were going through trivial motions in supervising the rectification," Xu Bijiu, executive deputy director of the central environmental inspection office, said in summoning Shangrao Mayor Chen Yun.

Chen said the city will make determined efforts to completely rectify the problem.

"Those responsible for the protracted rectification will be seriously held accountable," he said.

Authorities in Suining, Sichuan province, were rebuked for cheating in rectifying the overflow of untreated polluted water from a sewage treatment plant into the Fujiang River, a branch of the Yangtze, which was exposed in 2019 in Shehong county, the ministry said.

Urged 12 times to accelerate rectification, Shehong authorities did nothing. Knowing full well that the overflow was still occurring in the county, Suining's housing and urban-rural development bureau reported that it had been stopped.

Xu said it was the first time the ministry had summoned local governments specifically for concerns related to conservation of the Yangtze. Asia's longest river, its protection has been given increased importance by the central authorities.

Governments of the six areas will have to submit their rectification plans to the ministry and their provincial governments within 20 days. The plans will also need to be made public, the ministry said.

President Xi Jinping has chaired three symposiums on the Yangtze River Economic Belt, which consists of 11 provinces and municipalities and accounts for about half of China's population and GDP.

At the latest symposium, held in Nanjing, Jiangsu's provincial capital, in November, Xi called for the accelerated establishment of a mechanism to adequately reward protection and restoration of the ecosystem and environment, and make those responsible for their destruction pay a price.

Xu, from the central environmental inspection office, said it wanted to send a clear signal by summoning the officials that environmental protection efforts will not be relaxed even though all targets set during the 13th Five-Year Plan period (2016-20) had been realized, with some exceeded.