Governor Mao Calls for Efforts to Accelerate Opening up, Reform 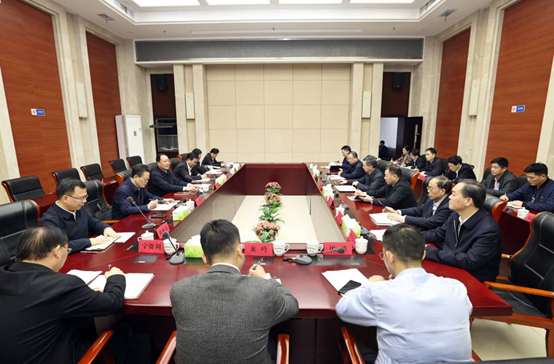 The symposium at the Hunan Provincial Department of Commerce.

Mao Weiming, CPC Hunan Provincial Committee deputy secretary and Hunan governor, inspected the Hunan Provincial Department of Commerce on April 21, 2021. He asked to implement the spirit of General Secretary Xi Jinping’s important speech made when inspecting Hunan, to leverage Hunan’s favorable location on the transitional “belt” connecting the eastern coastal area with the central and western areas, and in the junction “zone” between the Yangtze River Economic Belt and the Coastal Economic Belt; further optimize the business environment; accelerate the pace of opening-up and development; create a hub of reform and opening-up in inland China; and, make greater contributions to the construction of a modern new Hunan.

Governor Mao listened to the report of the Hunan Provincial Department of Commerce at the symposium. He said that since the “13th Five-Year Plan” period, Hunan’s business system has insisted on innovation-oriented opening-up and the rise of Hunan strategy; made every effort to do a good job in foreign economics, foreign trade, and foreign investment; and, steadily expanded consumption and promoted the development of the service industry. It has made new breakthroughs in foreign trade and economic cooperation, national open-up platforms, and investment promotion and attraction. Last year, Hunan’s total import and export volume reached 487.45 billion yuan, and the scale of investment promotion exceeded one trillion yuan. There are 178 Fortune Global 500 companies investing in Hunan. The establishment of national-level platforms such as the China-Africa Economic and Trade Expo and Hunan Pilot Free Trade Zone has laid a solid foundation for building Hunan into a reform and opening-up hub in the inland areas of China.

He pointed out that the provincial business system must implement President Xi Jinping’s important statement on opening up; respond to the uncertainty of world economic recovery; and, strengthen confidence in accelerating opening-up and development. He called for serving the building of the new development paradigm, the practice of Three Highlands and Four New Missions Strategy, and the establishment of high-quality life. We should optimize the business environment, improve the ability and level of enhanced utilization of markets and resources at home and abroad, think about what the investors need and help them succeed, and foster new opportunities and a sound momentum in expanding opening up, he added.