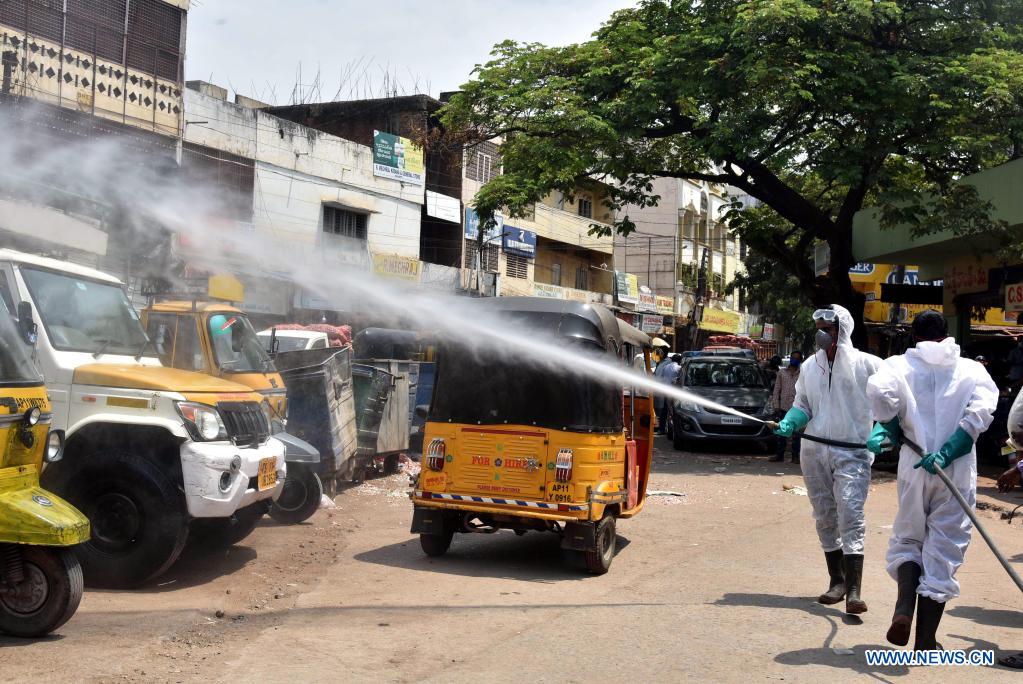 Personnel from Disaster Response Force (DRF) sanitize shops at the Mahbub mansion area, one of the biggest wholesale markets in Hyderabad, capital of India's southern state of Telangana, on April 26, 2021. India has, in the past days, witnessed a resurgence of COVID-19 cases, overwhelming the populous country's already crumbled healthcare system. (Str/Xinhua)

This was the sixth consecutive day when over 300,000 cases were registered in a single day, though there was a fall of nearly 30,000 new cases in a day compared to those reported on Monday.

According to the figures released by the federal health ministry, 2,771 deaths took place in the past 24 hours, taking the total death toll to 197,894.

There are still a total of 2,882,204 active cases in the country, with an increase of 68,546 active cases through Monday, while 14,556,209 people have been cured and discharged from hospitals so far across the country.

The COVID-19 figures continue to peak in the country every day, even as the federal government has ruled out imposing a complete lockdown to contain the worsening situation. While some school examinations stand cancelled, others have been postponed in the wake of COVID-19 situation.

Delhi has been put under a second successive weeklong lockdown till May 3.

So far over 145 million vaccination doses (145,271,186) have been administered to the people across the country and over 280 million tests have been conducted.

The national capital Delhi, which has been one of the worst COVID-19 affected places in the country, witnessed over 20,201 new cases and 380 deaths through Monday.

So far, 14,628 people have died in the national capital due to COVID-19, confirmed the Delhi's health department.