On April 27, Mao Weiming, CPC Hunan Provincial Committee deputy secretary and Hunan governor, inspected the Hunan Provincial Department of Agriculture and Rural Affairs and then presided over a symposium. The photo shows Governor Mao visiting the exhibition and sales center of high-quality agricultural products coming from areas that have been out of poverty. 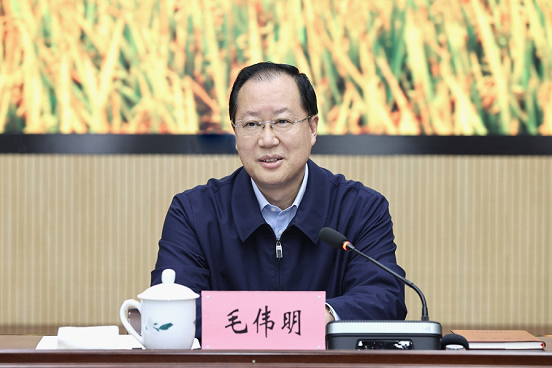 Mao Weiming, CPC Hunan Provincial Committee deputy secretary and Hunan governor, inspected the Hunan Provincial Department of Agriculture and Rural Affairs on April 27, 2021. He asked to implement the spirit of President Xi Jinping’s important speeches made when inspecting Hunan, the Central Rural Work Conference, and the CPC Hunan Provincial Committee Rural Work Conference. We should integrate the work of agriculture, rural areas and farmers into the overall planning of the Three Highlands and Four New Missions Strategy; shoulder the responsibility of food security; comprehensively promote rural revitalization; accelerate agricultural and rural modernization; and, consolidate the foundation for the building of a new modern Hunan, he added.

Governor Mao and his party came to the exhibition and sales center of high-quality agricultural products coming from those areas that have been lifted out of poverty in Hunan. Hundreds of “Xiang” (Hunan) agricultural and sideline products were displayed in the exhibition hall, and the livestreaming hosts were enthusiastically selling products. He encouraged the responsible comrades to further enrich product categories, broaden product sales channels, establish a long-term mechanism for production and marketing cooperation, and drive farmers in poverty alleviated areas to steadily lead a well-off life.

After listening to the report from the Hunan Provincial Department of Agriculture and Rural Affairs, Governor Mao said that in recent years, the provincial agricultural and rural system has implemented General Secretary Xi Jinping’s important expositions on the work of agriculture, rural areas and farmers. The comprehensive agricultural production capacity has been significantly enhanced, the modern agricultural development level elevated, the farmers’ life quality improved, and the agriculture and rural areas reform achieved remarkable results. The industries worth 100-billion-yuan such as livestock, poultry, grain, and vegetables have flourished. The output of rice, the number of hog production, and the planting area of canola are at the forefront nationwide. The supply of rice and vegetable is sufficient.

Mao Weiming emphasized that Hunan is a major agricultural province, and it is necessary to always take solving the problems of agricultural and rural farmers as the top priority, and to ensure the supply of important agricultural products, especially grain, as the primary task of rural revitalization. Efforts should be made to accelerate agricultural modernization, promote the integrated development of rural primary, secondary and tertiary industries, innovate rural governance methods, and build rural areas into farmers’ happy homeland.