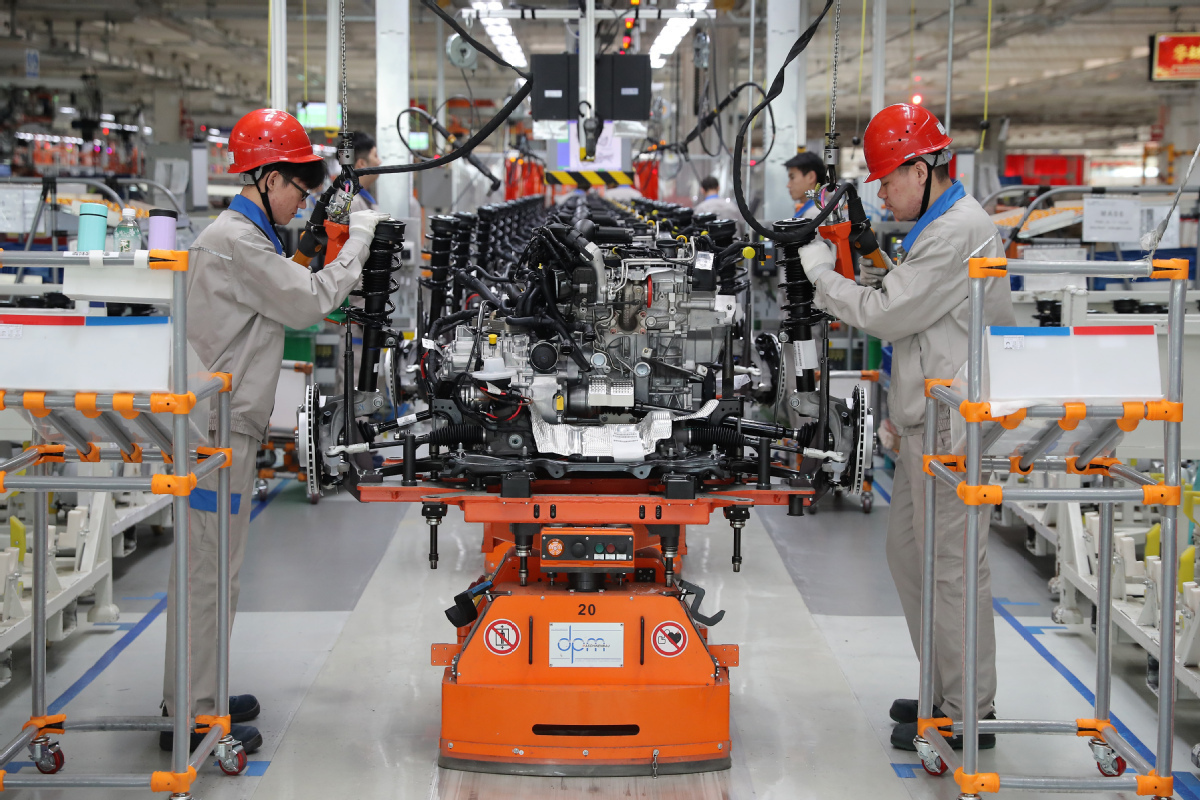 FAW-Volkswagen employees work on an assembly line at the automaker's Tianjin plant. [Provided to China Daily]

Nation continues to experience economic normalization as vaccinations ramp up

China's economic growth is projected to rebound to 8.1 percent this year, powered by strong exports and a gradual recovery in household consumption, despite uncertainties over the coronavirus pandemic, a report from the Asian Development Bank said on Wednesday.

Economists from the bank attributed the economic boom to the improved job market, restored consumer confidence and the release of pent-up household demand. The year-on-year GDP growth rate is projected to be 5.5 percent in 2022.

As the economy recovers, consumption will return as a primary driver of growth this year, followed by investment in the manufacturing sector, according to Dominik Peschel, head of the economics unit for the ADB resident mission in China.

The bank forecast that consumer inflation is expected to moderate to 1.5 percent this year before it recovers to 2.3 percent in 2022, due to the fall in the pork price.

In Asia, the number of new COVID-19 infections surged quickly from the prior week, with a higher number of deaths. This might have cast a shadow on the region's nascent economic recovery, said David Chao, Global Market Strategist, Asia Pacific (ex-Japan) at Invesco.

The renewed COVID-19 outbreaks show the pandemic is still a threat, which could be the biggest downside risk weighing on the generally positive outlook in Asia. The region's growth is forecast to rebound to 7.3 percent in 2021,which will moderate to 5.3 percent in 2022, the ADB's report said.

In contrast, China continues to experience economic normalization as containment efforts hold and vaccinations ramp up, according to experts.

With the development of China-New Zealand trade and China's rapid economic growth, the nation has gradually become the most important international market for Silver Fern Farms.

As the ongoing pandemic-related restrictions in many regions of the world will continually fuel demand for consumer goods, China's merchandise exports are expected to outperform imports in 2021.

This year, the People's Bank of China, the nation's central bank, will likely guide credit growth mainly through liquidity adjustments, and targeted cuts in the reserve requirement ratio remain an option to provide qualified banks with additional funds for lending, said the ADB report.

"Monetary policy will likely prioritize financial stability to a larger extent, especially in regard to real estate and shadow banking financing," it added.

In terms of fiscal policy, its support for the economy will likely be gradually reduced this year, and fiscal revenue is expected to improve in line with higher economic growth, the bank said.

However, potential financial risks should be prevented, especially in the banking sector, Qi Wen, associate economics and statistical analyst of the economics unit for the ADB resident mission in China, said on Wednesday.

"The country has not yet seen a notable surge in nonperforming loans, likely because the NPL recognition standards were relaxed in 2020 and the deferment of loan repayments gave banks some leeway to delay recognizing NPLs."

The ADB's report suggested that this year, in order to address potential challenges and safeguard financial stability, China's financial regulators may need to improve nonperforming loan management, consolidate the banking sector in an orderly manner and strengthen commercial banks' capitalization as the buffer to absorb shocks.