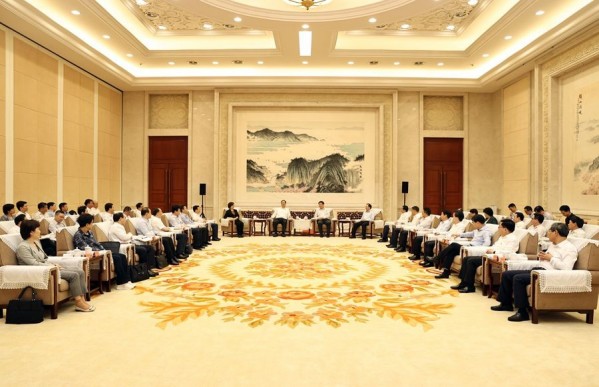 Lou Qinjian and Wu Zhenglong extended a warm welcome to Mao Weiming and his entourage and briefed them on Jiangsu's economic and social development. Lou Qinjian said that in recent years, under the strong leadership of the Central Committee of the Communist Party of China with Comrade Xi Jinping at its core, Hunan and Jiangsu have reached a new level of high-quality development. Hunan has many good experiences and practices for Jiangsu to learn. Hunan has an important position in the rise of central China, and Jiangsu shoulders important responsibilities in the integration of the Yangtze River Delta and the development of the Yangtze River Economic Belt. President Xi Jinping entrusted Jiangsu a major mission of "striving to be an example, be a demonstration area, and be a leader", and proposed the Three Highlands and Four New Missions Strategy for Hunan. The mission and strategy bear many similarities, and they point out a direction for the two provinces in deepening cooperation. Hunan and Jiangsu are highly complementary in development, and both face a series of important development opportunities, and there is great potential for cooperation in many areas. The Yangtze River closely connects Hunan and Jiangsu together.

Lou Qinjian said that we must earnestly implement the important instructions made by President Xi Jinping for us; have an accurate understanding of this new stage of development, fully apply the new development philosophy, and accelerate our efforts to create a new development pattern; and, strengthen collaboration and common development in the Yangtze River Economic Belt development, industrial park economy, ecological protection, scientific and technological cooperation, and cultural tourism, so as to work together to contribute to the overall development of the country.

Mao Weiming expressed his sincere gratitude to Jiangsu for its long-term support to Hunan's economic and social development, especially for the thoughtful arrangements for studying and inspection in Jiangsu. He said that he and his entourage were deeply impressed by the high-end development orientation, precise investment concept, unique form of business, strong development vitality, and good development momentum of Jiangsu’s industrial parks. These also provided useful references for the high-quality development of Hunan’s industrial parks. At present, Hunan has stood at a new historical starting point of development and is facing a rare historical opportunity. The province is vigorously implementing the Three Highlands and Four New Missions Strategy in accordance with the new goals and positioning set by President Xi Jinping. Efforts have been made to build a modern new Hunan. Hunan promotes economic and social development to achieve steady progress and improvement. It is expected that the two provinces will take the high-quality development of the Yangtze River Economic Belt as the goal, to jointly promote industrial transformation and upgrading, build a collaborative innovation system, protect the Yangtze River, enhance cultural tourism cooperation, and draw a new chapter in high-quality development.