On May 13, Mao Weiming, deputy secretary of the CPC Hunan Provincial Committee and governor of Hunan, met with Dong Mingzhu, chairperson of the Board and president of Gree Electric Appliances Inc. of Zhuhai. They also witnessed the signing of the agreement together. The photo above shows they are holding a discussion. 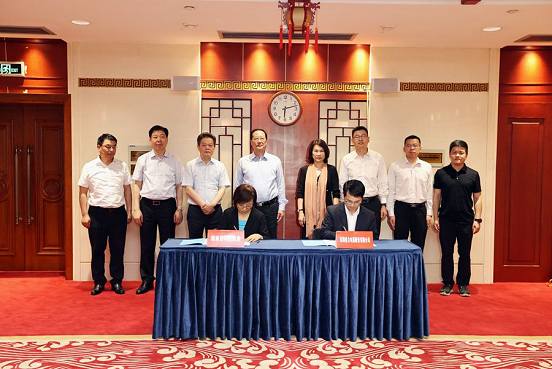 Governor Mao and President Dong witnessed the signing of the agreement.

The People’s Government of Hunan Province and the Gree Electric Appliances Inc. of Zhuhai (GREE) signed a strategic cooperation framework agreement on May 13, 2021. According to the agreement, both sides will strengthen collaboration in production investment, sci-tech innovation, and personnel training, and build GREE Changsha Base into the second largest domestic production base after Zhuhai headquarters. Mao Weiming, deputy secretary of the CPC Hunan Provincial Committee and governor of Hunan, had a discussion with Dong Mingzhu, chairperson of the Board and president of GREE. They also witnessed the signing ceremony together.

Xie Jianhui, member of the Standing Committee of the CPC Hunan Provincial Committee and executive vice governor of Hunan, and Li Gangfei, assistant to the president of GREE, signed the agreement on behalf of the two parties. Wang Qun, secretary general of the People’s Government of Hunan Province, attended.

Governor Mao thanked GREE for its contributions to the development of Hunan, especially to the advanced manufacturing progress. He said that Hunan’s advancement now stands at a new historical starting point, and it ushers in a rare development opportunity. The whole province, in accordance with the new goals and orientations set by President Xi Jinping, is vigorously implementing the “Three Highlands and Four New Missions” Strategy; accelerating the growth of the industrial park economy, private economy, and productive service industry; and, striving to build a modern new Hunan. He expected both sides to take the signing of the strategic cooperation framework agreement as an opportunity to further improve the industrial chain; promote chain extension, complementation, and strengthening; deepen cooperation and demonstration in such fields as intelligent manufacturing; enhance technical personnel training and cooperation; and achieve mutual benefit and win-win results in the construction of a modern new Hunan. Hunan government will persevere in creating a first-class business environment and provide investors with high-quality and efficient services for their development in Hunan, he added.

President Dong introduced that GREE has invested in Hunan for more than 10 years. Hunan province has strong advantages in terms of location, resource endowments, and manufacturing infrastructure. In particular, Hunan government has always been optimizing the business environment, which has strengthened GREE’s confidence in developing here. She promised that GREE will give full play to its own advantages, further expand cooperation areas, and comprehensively improve the normalization, standardization, and intelligence level of GREE Changsha production base, and help elevate the high-quality development of Hunan's manufacturing industry.