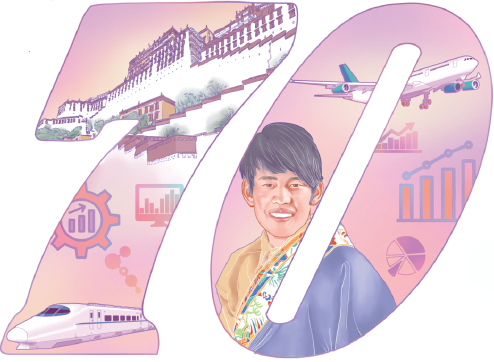 Editor's Note:This year marks the 70th anniversary of the peaceful liberation of Tibet. In the seven decades since then, the Tibet autonomous region has made remarkable achievements including eliminating absolute poverty and vastly improving people's lives and livelihoods. Three experts share their views on Tibet's amazing 70-year journey toward prosperity with China Daily.

With access to the outside world, the newly liberated Tibetan people became aware of how isolated and backward Tibet was during the feudal rule. Eight years after the peaceful liberation of Tibet in 1951, people from all walks of life, thanks to the removal of the social system that once imprisoned them, started venturing out of the region.

The stark difference in the level of development between Tibet and China's other regions made them realize the superiority and efficacy of the socialist system, and appreciate the work of the Communist Party of China and the central government in improving the lives and livelihoods of the Tibetan people through the development of the region.

To take control of their own destiny, the Tibetan people firmly supported the central government's move in 1959 to abolish feudal serfdom and promote democratic reforms in the region. The Tibet autonomous region was established in 1965, and since then the Tibetan people have been enjoying equal rights in managing State affairs, and the political right to govern the region.

The central government's transfer payments to Tibet have been increasing by the year, and a series of important engineering projects has significantly improved infrastructure in the region and raised the local residents' living standards. For instance, Tibet today has 118,800 kilometers of roads, about 8.5 times more than in 1965. In fact, with modern highways and railways, and excellent aviation facilities, Tibet has a compact transportation network.

With the support of the central government and the rest of the country, Tibet has performed remarkably well on the economic front. From 129 million yuan ($20.04 million) in 1951, Tibet's GDP jumped to 190.27 billion yuan in 2020-which was also 7.8 percent higher than the previous year despite the impact of the COVID-19 pandemic.

Besides, the eradication of absolute poverty has transformed the rural areas in Tibet, and the entire population of the region, including people in the previously 74 poverty-stricken counties, no longer has to worry about food. Also, compulsory education and basic medical care are free.

And while the average housing area of Tibetan farmers and herdsmen is 41.5 square meters, many farmers have moved into two-story buildings built with wood and stones, and herdsmen who have maintained their nomadic lifestyle can spend the winter in permanent structures so the elderly people and children have access to healthcare and education.

Tibet has also built a complete education system, with the average years of schooling increasing to 9.55, and Tibetan children have been enjoying 15 years of free education－from kindergarten to high school－since 2012, and children's attendance in primary school has reached 99.93 percent.

With medical care available all over Tibet, the maternal mortality rate has dropped to 50 per 100,000 and the infant mortality rate to 8 per 1,000 live births, both lowest in history. As for life expectancy in Tibet, it has increased from 35.5 years in 1951 to 71.1 years in 2020. Not only has Tibetan people's health greatly improved but also the region's population has increased from 1 million before the peaceful liberation to about 3.65 million in 2020.

Moreover, the construction projects are widespread in Tibet, extending from public facilities such as gyms in cities to clinics, school hostels, roads and water projects in villages. And a large number of engineers and technicians from the region and the rest of the country are working together to build a better Tibet.

In order to cultivate talents, Tibetan teenagers are selected and sent to study in high schools in other provinces. This arrangement has greatly increased the communication between Tibetan youths and their peers from other parts of China. While the improvement in transportation is attracting more tourists to Tibet, rising individual incomes is prompting an increasing number of Tibetan people to travel outside the region for work, education or to spend their holidays, promoting exchanges between the region and the rest of the country.

The extent of social harmony in Tibet can be gauged from the increasing number of inter-ethnic marriages, which also shows that all ethnic groups in Tibet are working together to build a common homeland. And the sense of Chinese community has been strengthened among Tibetan people, especially due to increased interactions with their compatriots from the rest of the country.

The views don't necessarily represent those of China Daily.

The author is a researcher at the China Tibetology Research Center.