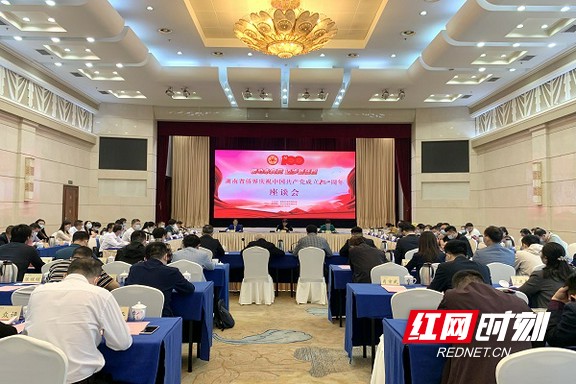 Song Jiefeng, Hunan FOC consultant, Laos permanent honorary President of Hunan chamber of commerce, said that as a Chinese, he would practise more actively into the journey of the great rejuvenation of the Chinese nation, give full play to the overseas resources advantage, response "area" initiative, to further promote Laos with hunan in the field of economy, science and technology, culture and communication, To make more contributions to Hunan's "three high and four new" strategy.

At the meeting, Huang Fang was the representative representative of the overseas Chinese community to study the history of the Party and make a speech. With the theme of "Without the Communist Party, there would be no New China", Huang Fang expounded the profound connotations of why the CPC "can", why Marxism "works" and why socialism with Chinese characteristics "is good" by analyzing the differences between "with and without the Communist Party of China" and "new China and old China". The article also uses a number of party history stories to illustrate that the CPC is a party armed with Marxism, a party that is "people-centered and works for the welfare of the people", "dare to make self-revolution and turn inward", "democratic and open", "firm in faith and unswerving in original aspiration" and "seek truth from facts". Huang Fang encouraged overseas Chinese people in the province to actively learn about the history of the Party, the history of the New China, the history of the development of socialism and the history of reform and opening up, bear in mind the hard-won new China and cherish the happy life of the present. The provincial cadres of the Federation of Overseas Chinese should improve their ability to serve overseas Chinese, do a good job of ideological guidance, and gather the hearts and minds of overseas Chinese. It is hoped that returned overseas Chinese and their relatives and overseas Chinese will continue to carry forward the glorious tradition of loving the country and loving their homeland, develop common resonance with the motherland, and celebrate the 100th anniversary of the founding of the Communist Party of China with concrete actions.