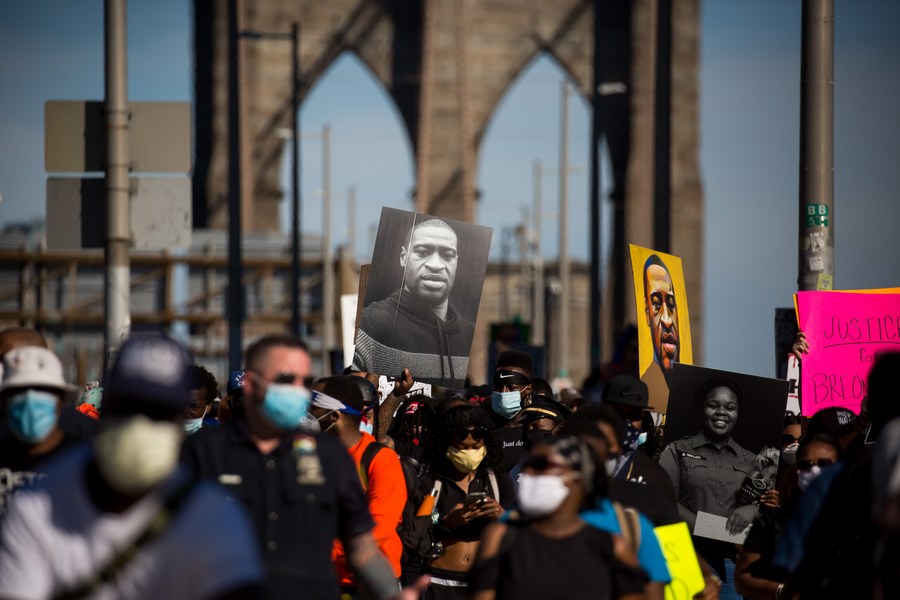 Demonstrators take part in a protest sparked by the death of George Floyd across the Brooklyn Bridge in New York, the United States, June 13, 2020. (Photo by Michael Nagle/Xinhua)

The death of Floyd is tragic. Yet perhaps a bigger tragedy for the United States is doing little substantial or turning a blind eye when knowing perfectly where the problems are.

The United States has no time to waste but to summon a real moment of racial reckoning.

BEIJING, May 25 (Xinhua) -- It has been a year since African American George Floyd lost his life to police brutality, whose death sparked what many called a moment of "racial reckoning" inside the United States.

However, after all the tears dropped, blood shed, and protests launched, it is hardly surprising that not many meaningful changes have taken place.

Across the country, more "I-can't-breathe" cases are happening; police reforms are deadlocked in Congress; and politicians of both parties are scrambling to turn Floyd's tragic death into ammunition for partisan attacks.

Why systemic racial discrimination is so hard to tackle in the United States? 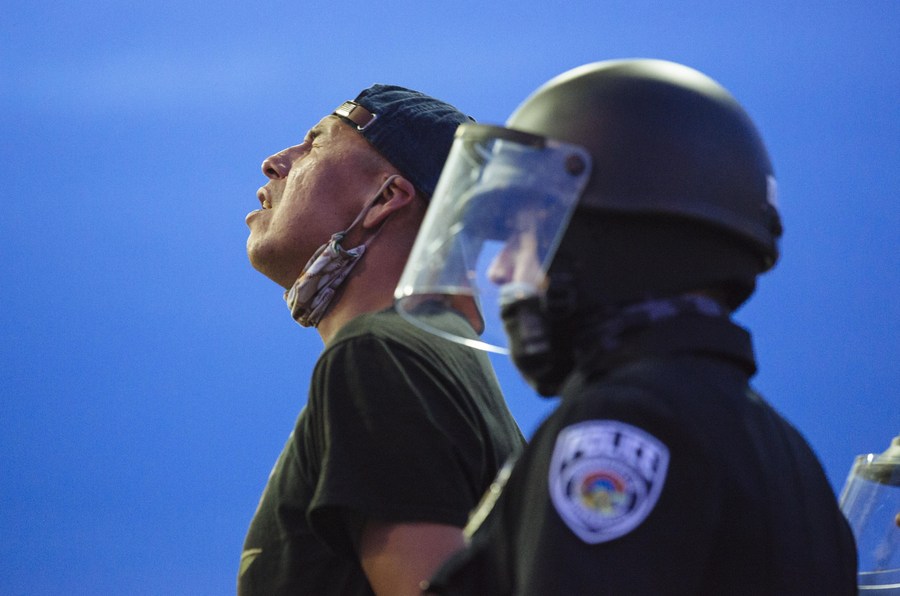 A demonstrator is arrested during a protest over the death of George Floyd in Minneapolis, the United States, May 31, 2020. (Photo by Angus Alexander/Xinhua)

Even after centuries of struggle, disparities in access to quality education, health care and job opportunities between whites and non-whites in America continue to widen. The fact that the communities of color have been hit the hardest by the COVID-19 pandemic offers just a glimpse into the miserable life of ethnic Americans.

The rise of white supremacy in recent years flashes a bigger red alert as it has been encouraging hate, triggering violence, and eroding precious common grounds for necessary race reforms. 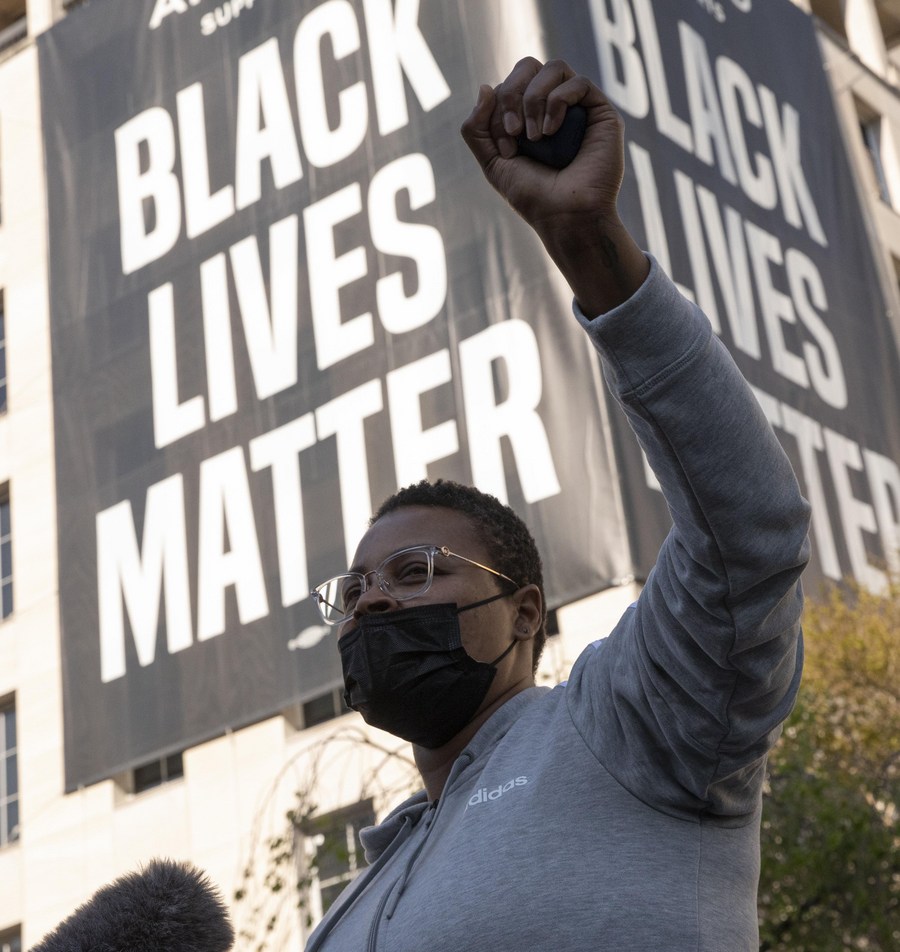 People gather near the White House reacting to the trial verdict that former Minneapolis police officer Derek Chauvin was found guilty on all counts in Washington, D.C., the Untied States, April 20, 2021. (Photo by Aaron Schwartz/Xinhua)

While it might be easy to just blame the racial problem for being too chronical and too complicated to confront, America's politicians should be held most accountable for failing to make much-needed changes possible.

Nowadays, U.S. politicians have been more used to staging political shows than taking truly sensible actions against the root cause of racial discrimination. They invest their time and energy in making hollow promises to their voters. To appeal to their political base, some even tried to manipulate racial divide and pander to extremists.

Apart from politicians' selfishness, America's ever polarizing political climate is chipping away the motivation and courage of those in power to cross partisan divide, and reach any grand bargain on racial problems. The stalled police reform bill is an explicit proof. 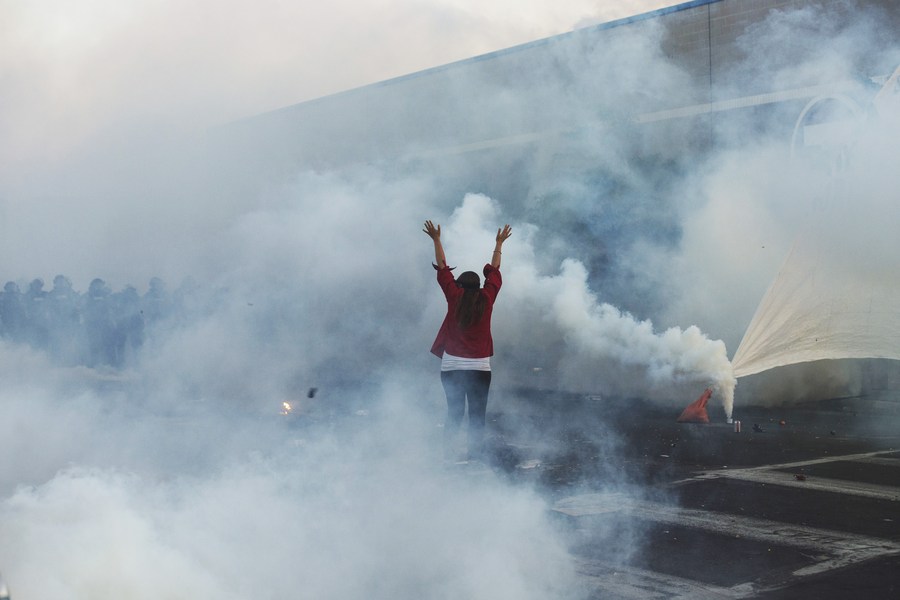 A woman raises her arms as riot police fire tear gas during a protest outside the 5th Police Precinct in Minneapolis, the United States, on May 30, 2020. (Photo by Angus Alexander/Xinhua)

The death of Floyd is tragic. Yet perhaps a bigger tragedy for the United States is doing little substantial or turning a blind eye when knowing perfectly where the problems are.

In a nation where census shows non-Hispanic whites are expected to be a minority in about 25 years, its racial challenge could become more acute if left unattended.

The United States has no time to waste but to summon a real moment of racial reckoning. ■