Uncertainties ahead in transatlantic ties despite Biden's symbolic gesture 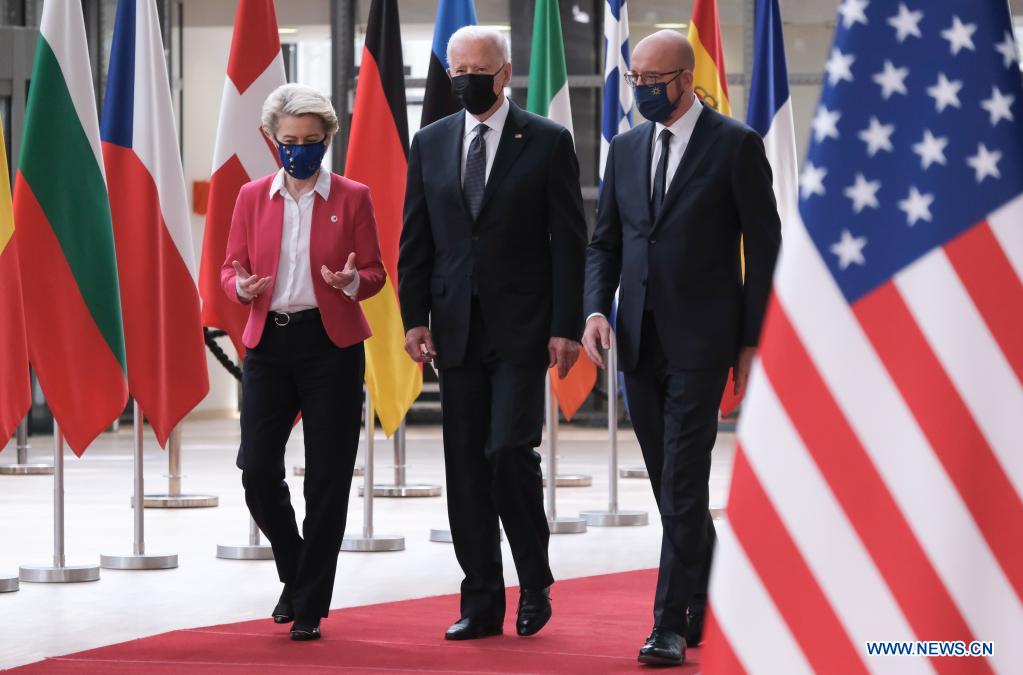 BERLIN, June 16 (Xinhua) -- Uncertainties and problems are still looming in transatlantic relations even after U.S. President Joe Biden made a two-hour stopover Tuesday at EU headquarters signaling that it is in the U.S. interest to maintain a friendly relationship with Europe.

"It's overwhelmingly in the interest of the USA to have a great relationship with NATO and the EU. I have very different views than my predecessor," Biden said, hinting that he will overturn the policies imposed on Europe by former U.S. President Donald Trump.

Despite optimistic echoes from some EU officials, observers are still worried that American diplomacy is not stable again for good as it is noted that Trump's policies and his influence on the Republicans are hardly vanishing.

"A lot of Europeans will be very cautious when it comes to this renewal of transatlantic relations, because what they have experienced," Julian Mueller-Kaler, a researcher with the Berlin-based German Council on Foreign Relations, told Xinhua in an interview.

Mueller-Kaler said Biden's primary goal is to assure America's traditional partners that "the country is not leaving, hanging nor abandoning its role in international politics."

"But a lot of it is mostly symbolic at the moment," Mueller-Kaler said.

One tangible result of Tuesday's meeting was a breakthrough in the long-running dispute over subsidies for aircraft manufacturers Boeing and Airbus.

Officials from both sides confirmed that the tariffs as part of the trade war imposed during the Trump administration will be officially suspended on July 11.

The United States reserved its rights to reimplement the tariffs if Washington finds that American companies are not able to "compete fairly" with their EU counterparts, according to U.S. Trade Representative Katherine Tai.

The truce was seen as a first good-will gesture by Biden's government to reverse the trade policies against the EU.

Unsolved rows include the tariff on steel and aluminium that Trump slapped on Europe and other close partners in 2018. But the U.S. authorities have been reluctant to give them up easily as the upholders of the trade barrier are still politically lucrative for Biden.

Von der Leyen said Brussels has set up a working group to further discuss the "difficult fields" and hopes the tariff will come to an end by December.

Volker Tschapke, honorary president of Germany's Prussian Society, told Xinhua that Germany as well as the EU has been somehow disappointed as they had expected Biden would end the trade war swiftly, but it now turns out to be yet another thorny issue.

Biden's visit at the EU headquarters followed the G7 and NATO summits, where he spared no efforts to urge the participants to adopt a tough stance on China and Russia, but the tones in Europe have yet to meet his anticipation.

When asked by local media on Tuesday why the EU did not side with the United States using a harder voice against China, von der Leyen said China and the EU have common goals in climate change.

Moreover, after the NATO summit on the previous day, German Chancellor Angela Merkel said China, like Russia, is also a partner in some areas.

Some experts said the EU has taken the differentiated stance since it wants to maintain cooperation with China and Russia while not being dragged into a Cold-War style conflict between the United States and other countries.

Xulio Rios, director of the Observatory of Chinese Politics in Spain and Galician Institute of Analysis and International Documentation, said Europe should support an agenda that turns its back on the resurgence of twentieth-century policies that led to a world divided into blocks.

The EU's trajectory should be valued, as it recognized other actors beyond the West can also make decisive contributions to global issues, said Rios.