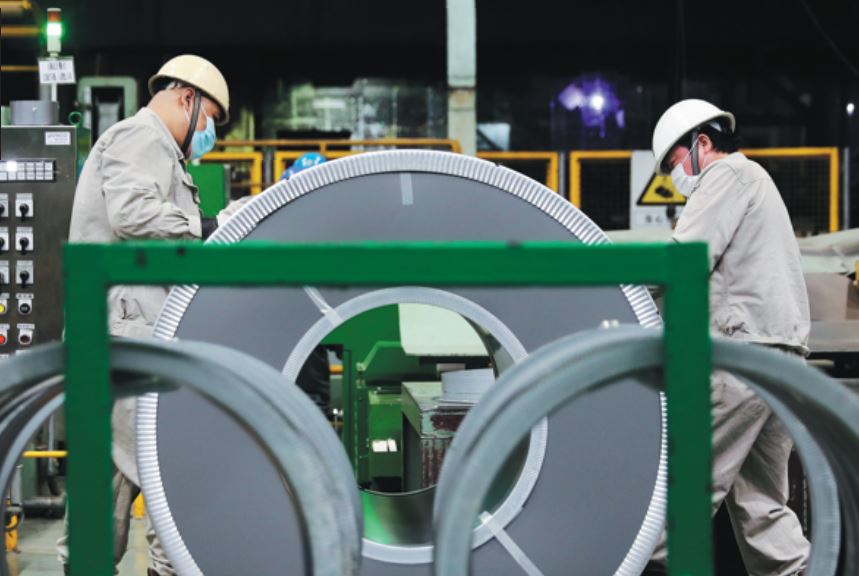 Employees work on the production line of Baoshan Iron and Steel Co Ltd in Shanghai. [Photo/Xinhua]

Certain policy adjustments might be needed for China to ensure effective supplies from certain industries to the overall economy and minimize any possible impact of the recent global commodity price surge on inflation, experts and industry insiders said.

In the second half of the year, uncertainties relating to the global economy will likely be exacerbated more by any changes in the United States' macroeconomic policy than developments in China, they said.

On Saturday, Xu Gao, chief economist of Bank of China International, told a seminar in Beijing that China's economic recovery is getting stronger in both supply and demand.

At the event organized by the National School of Development at Peking University, Xu said restrictive production measures in certain sectors may have hampered supply capacity of certain industries like steel. He further said it is advisable that similar restrictive policies be phased out in a gradual and apt manner to keep the supply side stable and better defuse inflation.

China's producer price index, which gauges factory-gate prices, rose by 9 percent on a yearly basis in May, up from 6.8 percent in April, marking the highest level in nearly 13 years, data from the National Bureau of Statistics showed earlier this month.

Xu noted that at regional and local levels, some restrictive policies on certain industries like iron and steel may have slowed domestic supply recovery. So, more timely policy adjustments are needed on this front.

Xu said he believes the country's overall CPI growth will come in below 3 percent, well within the government target.

The US and China, the world's top two economies, are driving the recovery, Xu said. He said the two economies are recovering in different ways and complementing the growth of one another.

With effective control of the COVID-19 pandemic, China has gained more than a firm footing on the supply front and has become an effective manufacturing supplier globally, while the US is showing a robust recovery on the demand side with its big stimulus－quantitative easing or QE－putting money directly into households' bank accounts. In China, more support measures were rolled out to alleviate unforeseen pandemic-related burdens on businesses.

At the Beijing seminar, Liang Zhonghua, chief macro analyst of Haitong Securities, said that globally, economic uncertainty during the second half of this year is more likely to come from US policy stance rather than China's.

Liang also said he believes that the US will see a quicker recovery than most other economies, and conditions for the process of reducing the US Federal Reserve's debt purchases, known as "tapering", are ripe. The level of inflation has run well beyond the Fed's 2 percent target with the US job market getting robust.

Yet, actual implementation of tapering may not come until late this year, he said.

The Global Economic Prospects, released by the World Bank earlier this month, forecast China's GDP will grow 8.5 percent this year, which will help a great deal in the recovery of the global economy.