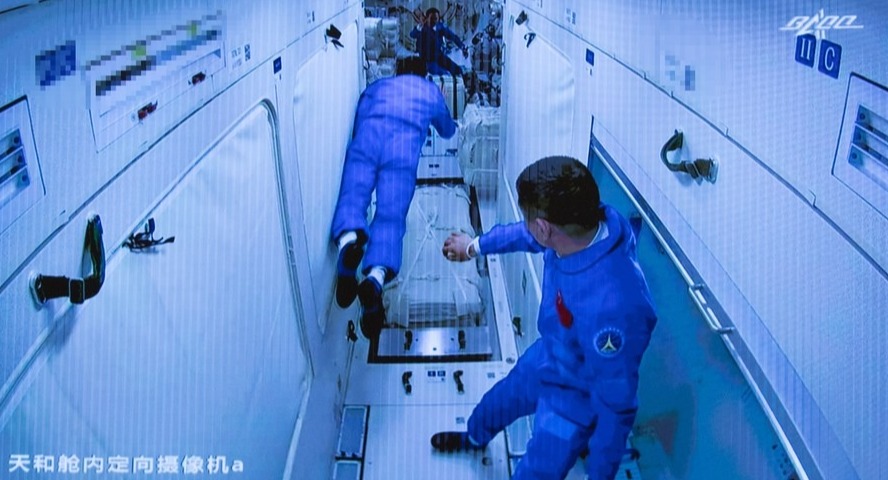 The three Chinese astronauts of the Shenzhou XII mission get accustomed to the space station core module, Tianhe, in this image captured by the Beijing Aerospace Control Center on June 17. [Photo/Xinhua]

Astronauts on board the core module of China's space station have a wide variety of foods specifically designed for them to enjoy during their three-month space journey, according to project leaders.

Ji Qiming, assistant director of the China Manned Space Agency, told China Daily on Tuesday that there are more than 120 kinds of food and beverages inside the core module, named Tianhe, or Harmony of Heavens. These carefully selected foods and beverages are nutritionally balanced, taste good and can be kept for a long time.

He noted that the dining area of Tianhe has a microwave oven, a refrigerator and foldable tables.

Huang Weifen, the chief trainer of Chinese astronauts, said the food and beverages have been divided into weekly breakfast, lunch and supper menus, adding that the menus were made based on personal flavor preferences gathered through a survey before the astronauts set out on their mission.

Sources with knowledge of the survey said that astronauts in the Shenzhou XII mission and crews for the next three spaceflights were invited to taste hundreds of specially prepared foods and beverages and then score them. Specialists in charge of astronauts' meals used the survey results to improve the menus.

According to the survey, most Chinese astronauts have a preference for Sichuan-style spicy food. In addition, compared with sweet-and-sour sauces, spicy sauces are always the first to be used up, the sources said.

The snacks for the day were peach juice, marinated chicken gizzard, chocolate, canned fruit and cookies.

Nie and his crew members entered Tianhe on Thursday afternoon after their Shenzhou XII spacecraft docked with the module earlier in the day.

The spaceship was launched by a Long March 2F carrier rocket that blasted off on Thursday morning from the Jiuquan Satellite Launch Center in northwestern China.