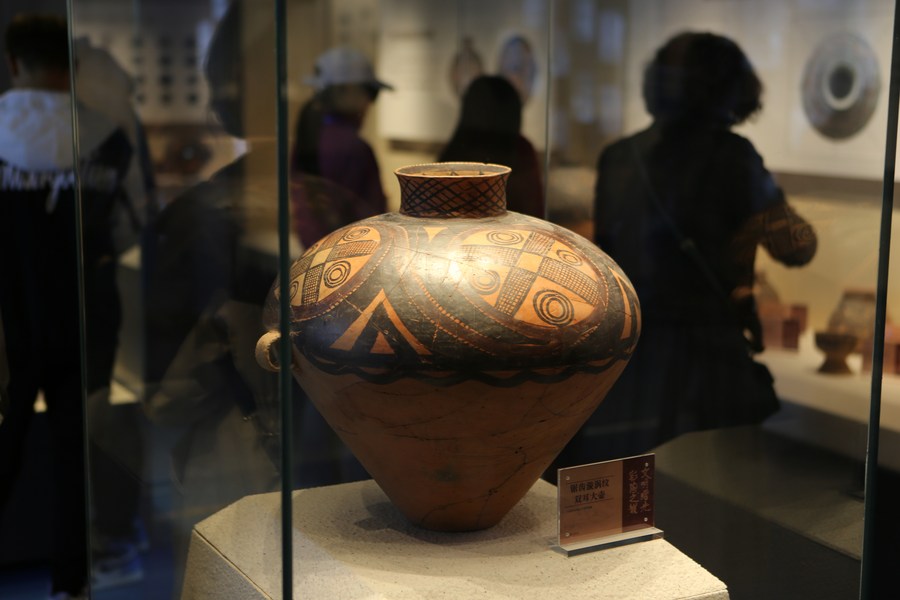 Photo taken on September 23, 2020 shows an exhibit of the Majiayao culture that dates back over 5,000 years in Lintao, northwest China's Gansu Province. (Xinhua/Geng Xinning)

A number of scholars expressed such views regarding the Majiayao culture at a recent symposium held in Linxia Hui Autonomous Prefecture, northwest China's Gansu Province.

The Majiayao culture is in the upper reaches of the Yellow River and its tributaries. With more than 5,000 years of history, it forms a significant part of the origin of the Chinese civilization.

This culture spread to Central Asia via China's Xinjiang, bringing millets from China to the west, said Han Jianye, a history professor with the Renmin University of China.

Decorations with Central Asian features also appeared on the painted pottery items in Majiayao, in addition to sheep and cattle from the west, Han added.

The Majiayao culture also had interactions with the Harappan culture of India. Similarities are clear from the items from the two sites, said Tang Huisheng, a professor from Hebei Normal University.

Some experts pointed out that the Majiayao culture also shares similarities with the Cucuteni-Tripolye culture at the western and the northern parts of the Black Sea regarding decorations and shapes of painted pottery ware.

"The two cultures thrived and declined around the same time," said Li Xinwei, a researcher from the Institute of Archaeology under the Chinese Academy of Social Sciences. "People from the two cultures also used pottery to make human head statues."

In recent years, efforts have been enhanced to protect the Majiayao culture by building thematic museums, organizing academic symposiums, and conducting more research.