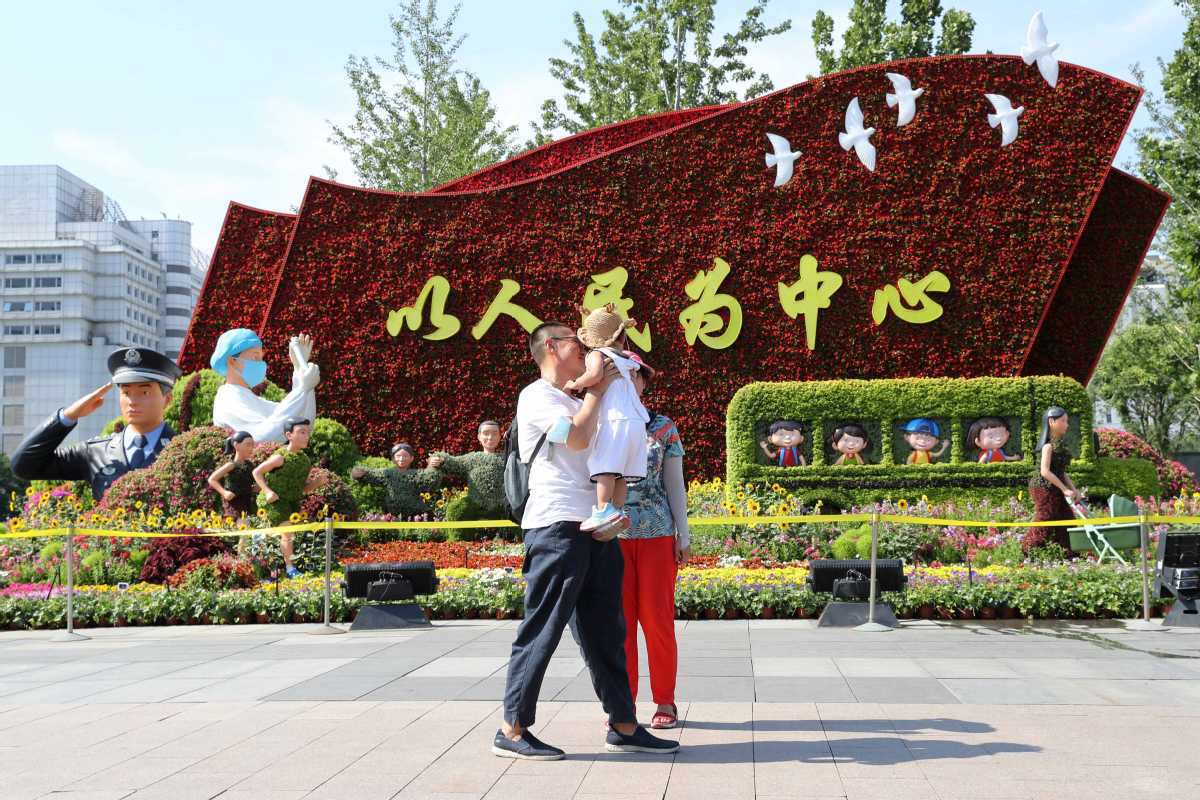 A flower display at the northeast corner of the Xidan intersection in Beijing shows people from different walks of life on Tuesday. The text reads "people-centered", which is a phrase often used to describe the focus of the Communist Party of China. WANG ZHUANGFEI/CHINA DAILY

Editor's Note: This year marks the 100th anniversary of the founding of the Communist Party of China. Today the CPC has grown into the largest political party in the world, and the country under its strong leadership has become the world's second-largest economy. Two experts share their views on how the Party has led the country and people to rejuvenation and prosperity with China Daily:

Understanding the Communist Party of China is the key to rebuilding China-US political mutual confidence, because some Americans' wrong notions about China are related to their misunderstanding of the CPC. Party leadership, as inscribed in China's Constitution, is the most fundamental characteristic and biggest systemic advantage of socialism with Chinese characteristics. Only when the US understands and respects this will it stop finding fault with China on the latter's domestic affairs.

Three misgivings must be cleared

In particular, the US side needs to overcome three important misgivings. To begin with, the US sees China as an "alien" country. Some people lament the failure of the US policy, begun under former president Richard Nixon, of engaging with China. After having turned Japan into a Western-style country, the Americans wanted to do the same with China, ignoring the fact that China has been an independent entity since ancient times, a civilization of 5,000 years, and it is unlikely to adopt a completely Western model.

Yet China has learned a lot from advanced aspects of different civilizations. Traditional China has developed into a modern China that can face the world, as evident in the Belt and Road Initiative and the concept of a community with a shared future for mankind.

Second, the US believes the biggest difference between China and the West lies in the CPC. Ignorance about the CPC's leadership along with the US' misunderstanding of traditional Chinese culture lies at the root of the problem. The US also believes the Chinese revolution picked up what the West had discarded as heresy, that is, Marxism. To eliminate these misgivings, the Party must be understood in terms of 100, 500 and 5,000 years.

A hundred years: The CPC's catchword has evolved from "Communist Party/communism" to "China/socialism", and socialism itself has been Sinicized from the perspectives of movement, institutions and civilization.

It is matter of concern that the Americans are increasingly seeing China through the prism of ideology and nation-state, rather than from the perspective of history and culture. The Party's logic involves "standing up", "getting rich" and "growing strong", as well the transformation from a revolutionary party to a ruling party and finally to a governing party.

Five hundred years: Since the Renaissance 500 years ago, the development of Western countries has impacted China a lot, both positively and negatively. The conceptions of "democracy" and "science" were eye-opening and enlightening for the Chinese seeking development in the contemporary history. But the painful chapter of China being invaded by colonial powers promoted the CPC to explore the nation's own path of development.

Five thousand years: That the CPC has adapted well to the classical culture of China and adapted to and preserved a state of grand unity is evidence that the soil of 5,000 years of civilization has borne fruit. The Party has integrated the lessons learned from Western civilization with traditional Chinese culture.

Thus, China-US strategic dialogue can start with the core values of domestic and global governance and then explore the Party's governing logic in such realms as climate change, public health and digitalization. And the two countries can work together for fairness and justice for humankind.

As the CPC celebrates its 100th anniversary this year, it is important for Americans to understand, to review their outlook on the CPC and hence their outlook on China. For that, they can better understand "Communist Party of China" word by word.

China: Communism has been Sinicized in China, which means it has been integrated with the Chinese revolution and traditional culture, transforming the traditional ideals of eliminating wealth gaps and forging a grand unity into building a society with all-around moderate prosperity and realizing all-around modernization.

The Party's legitimacy is a choice informed by history, reality and the people. As Daniel Bell said in The China Model: Political Meritocracy and the Limits of Democracy, it is election plus selection when it comes to official appointments.

What is China? China is a "civilization-state". Traditional Chinese civilization has been transformed by the CPC, and the Chinese civilization in its popular sense is not equal to a secular one that subscribes to no religious beliefs. The Chinese people don't have a common god but they respect both those who believe in gods and those who don't. That's why the Party can seek truth in facts and demonstrate the greatest possible openness and inclusiveness to achieve social justice and fairness.

Communist: "Communist" has incorporated the ideas of common prosperity and public good. China has just bid farewell to absolute poverty and embarked on a journey toward all-around modernization, which is why the Party and Party General Secretary Xi Jinping have won people's hearts.

Party: Marxism has been Sinicized in China. Marxism in China has been modified and integrated with the Chinese civilization.

Sun Yat-sen borrowed from former US president Abraham Lincoln the governance concept of "of the people, by the people, for the people" and developed his "three principles of the people" (nation, civil rights, people's livelihoods).

The Party has taken this concept one step further to accentuate "all for the people", "rely on the people" and "close to the people", because they won't relax until the rest of society finds comfort. The CPC isn't a political party in the traditional Western sense or the traditional Chinese sense. It is seeking fairness and justice for the Chinese people as a whole.

And what is the goal of the great rejuvenation of the Chinese nation? It is neither to return to the Han or Tang dynasties, nor to overtake the US but to make greater contributions to human progress and provide public goods that are better, more inclusive and more affordable. From the perspective of traditional culture, it is not difficult to understand that the Party will not only not seek hegemony but instead will oppose it. The Party is spearheading the great rejuvenation of the Chinese nation to herald a new era that is free of hegemony.

As a Chinese diplomatic tradition, China's opposition to hegemony is also obvious in the China-US Shanghai Communique of 1972. Former leader Deng Xiaoping once said: "If one day China seeks hegemony in the world, people from all over the world share the obligation to expose us, condemn us and oppose us as a hegemon along with the Chinese people." Rather, the Party wants to build a community with a shared future for mankind.

Facts have shown that attributing all the problems facing the US to China and the CPC won't solve the US' problems. Former US president Donald Trump's trade war against China failed to bring industry, capital and jobs back to the US. Instead, it has only made China stronger.

The US leadership cannot solve its problems by trying to suppress China. In contrast, China could become a partner of the US in solving global problems facing them both. Resolving basic epistemological issues is a precondition for rebuilding mutual political confidence.

The CPC should be understood from the perspective of civilizations, especially Chinese civilization. So the US and China should conduct dialogue on the idea of traditional Chinese culture, which incidentally supports the CPC and the core values of globalization, to build mutual trust and prevent misjudgments.

The author is Jean Monnet chair professor at Renmin University of China.