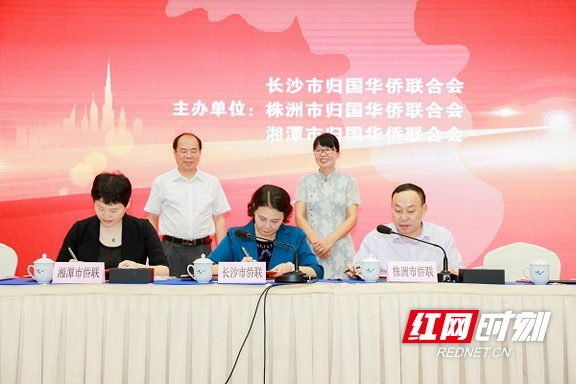 During the meeting, city FOCs of Changsha, Zhuzhou and Xiangtan signed the integration cooperation agreement of three cities, which agreed to integrate hearts and force to build all-round cooperation, multi-level and win-win situation, to improve the sense of happiness of the masses, promote the innovation in talents, projects, funds gathered three city business, implementing the resources sharing, the three cities at home and abroadTo promote the development of FOCs in the three municipalities.

Tan Xiaoping said that Changsha FOC and its Youth Committee should take the cooperation between the three cities as an opportunity, fully mobilize the resources of the three cities, highlight the key points of cooperation, guide the majority of overseas Chinese to actively participate in intelligent manufacturing, scientific and technological innovation, rural revitalization and other fields, and improve the participation and contribution of overseas Chinese in service development.Changsha FOC Youth Committee should strengthen the ideological and political guidance of the overseas Chinese community, provide services for the growth and development of the young members, and guide them to be the main force of high-quality development and the pacesetter of the integration of Changsha-Zhuzhou-Xiangtan.