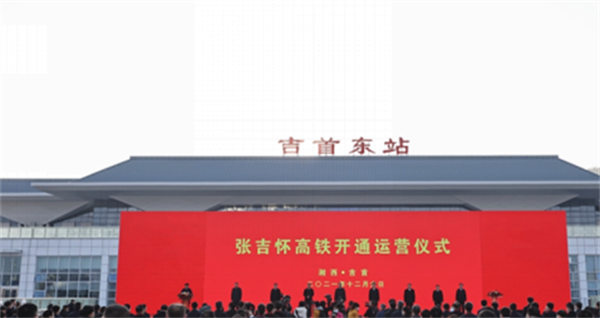 The photo shows the opening ceremony.

The Zhangjiajie-Jishou-Huaihua (Zhangjihuai) High-speed Railway opened to traffic at about 9 o’clock on December 6, 2021. Hence, the travel time between Zhangjiajie and Changsha is shortened to 2.5 hours.

Construction of Zhangjihuai High-speed Railway began in December 2016. It is a regional link in China’s "eight vertical and eight horizontal" high-speed rail network. It starts from western Hunan, linking with Qianjiang-Zhangjiajie High-speed Railway in the north and Shanghai-Kunming High-speed and Huaihua-Shaoyang-Hengyang railways in the south.

Zhangjihuai High-speed Railway was funded by Hunan government and the China State Railway Group Co., Ltd. With a total investment of 37.65 billion yuan, the 245-kilometer line is designed for trains running at up to 350 kilometers per hour. There are seven passenger train stations along the line –Zhangjiajie West; Furong Town; Guzhang West; Jishou East; Fenghuang Ancient Town; Mayang West; and, Huaihua South stations. Sixteen pairs of trains will be operated on the line, with a speed of 300 km per hour in the initial stage.

As a part of Hunan’s ten major infrastructure projects, Zhangjihuai High-speed Railway will facilitate trips for the residents along the line, and promote rural revitalization. It is of great significance for Hunan’s participation in the national Belt and Road Initiative, developing the Yangtze River Economic Belt Development, and accelerating construction of a new modern socialist Hunan.

The railway connects several well-known scenic areas, such as Wulingyuan, Tianmen Mountain, Furong Town, Aizhai Grand Bridge, and Fenghuang Ancient Town, and is thus reputed as the “most beautiful high-speed railway in western Hunan”. It will bring more travelers to western Hunan, and inject new vitality into the tourism of western Hunan and even the whole province.