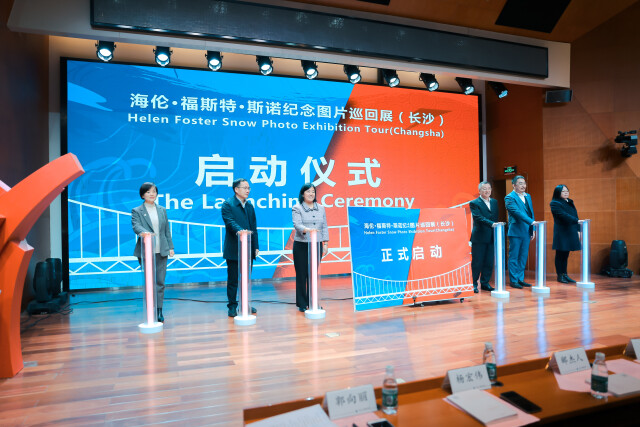 At the opening ceremony.

Xu said that, this year marks the 90th anniversary of Helen Foster Snow’s first visit to China. It is well known that Hunan is the birthplace of Chairman Mao Zedong. Helen Foster Snow once interviewed Mao in Yan’an. She visited Changsha and Shaoshan during her tours in Hunan between late 1972 and early 1973, and wrote her monography Hometown of Mao Zedong. Xu hoped to learn more about Helen Foster Snow through these photos, promote her spirit of faith in facts, pursuit for truth, integrity and courageousness, and independent thinking, build a bridge among people of different countries with mutual understanding and tolerance to make up the difference and divergence, and continue to strengthen mutual trust, increase communications, expand cooperation, and deepen friendship between China and the U.S.A, and the world.

Helen Foster Snow’s reports and photos about China, and her monographs later, are of significant importance to the people in the U.S.A and other countries who want to understand China, said Melissa J. Lan. She spent her lifetime promoting people-to-people connections, and enhancing mutual trust between civilizations. She set an example to us, and inspired people of China and the U.S.A to realize these noble goals.

The photos and text were provided by the library of Brigham Young University and the Snow Research Center of Shanxi Province.

The exhibition will be open on the second floor of the Changsha Library until late February 2022.