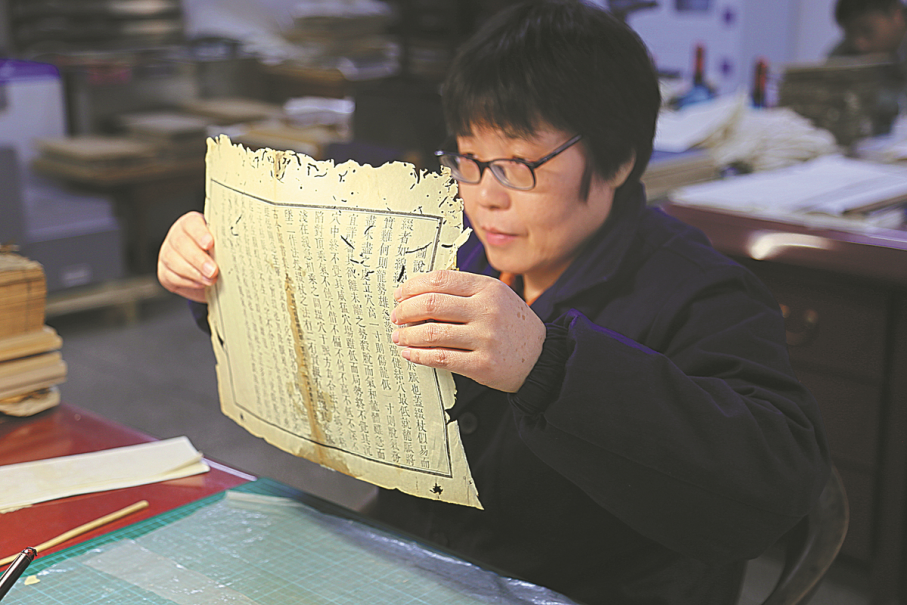 Shi checks a restored page by holding it up to a lamp.

Timeless knowledge is being protected for the future.

Shi Wenlan said the only thing that interests her is dealing with smelly, moldy, centuries-old books.

"I don't want to drink, I don't want to eat or move. I like sitting alone under the warm lights, mending holes and cutting pages. I'm a boring person, but I'm doing an interesting thing," she said.

In the past 26 years, the 51-year-old restorer of ancient books at the Hunan Library in Changsha, capital of Hunan province, has brought about 100,000 pages of ancient books back to life, sometimes from nothing but flaky remnants. Her work helps to ensure that ancient knowledge can be retained, read and appreciated by people today.

Shi has great faith in her little-known job. "Ancient books are nonrenewable, precious documents and important achievements of Chinese civilization. To restore them is to rescue cultural relics that are dying out," she said.

Books age and decay over time. Though technology－such as accurately controlled temperatures and humidity levels－can be used to slow the process, a number of old books are on the verge of perishing forever, experts said.

At the Hunan library alone, a third of its 680,000 ancient books are in urgent need of restoration, which means each of its eight restorers needs to complete 3,000 pages a year, said Liu Xueping, director of the library's special collection department.

"Still, the pages are deteriorating quickly, which puts great pressure on our work," Liu said.

Ancient books stored at the library include the writings of well-known historical figures from Hunan, such as Zuo Zongtang, a general during the Qing Dynasty (1644-1911). The volumes include poems, calligraphy and paintings, the only copies of old newspapers that record significant historical events, as well as books related to the genealogy of local families.

The series Shi is currently working on is known in English as The Collection of Ancient and Modern Books, edited during the reign of the Yongzheng Emperor (1678-1735) of the Qing Dynasty, who wrote the preface.

It's an important encyclopedia to search for ancient documents and information about various industries or activities. One of the 11 books that comprise the collection in the library has been badly damaged by insects, according to Shi.

She remembers one book that proved a headache: an accounts register from a prestigious local family dating back to roughly 1849-53.

"The paper pages were like cotton fiber at the time, so I had to hold my breath when restoring them, otherwise the pieces would have been blown away," she said.

Though it took six months to finish the restoration work, Shi enjoyed the process. "It's an interesting book. The accountant recorded every detail of income and expenditure of the family of his employer, a rich landowner," she said.

The books also surprise her occasionally. "Sometimes, we find small objects like stamps or letters within a book. While I was restoring a genealogical book about a family surnamed Chen, I found two paper patterns used to make a pair of shoes. That touched my heart. How sweet!" she said.

A book awaiting restoration is displayed along with the tools Shi uses in her work.

Rising from the dust

Even though she is now a dedicated, renowned restorer, Shi didn't really want the job in the first place.

As a child, she often played around the library, where her father worked. One day, at age 13, she passed the open door of a room on the fourth floor. A quick glance revealed pots, pans and bowls placed on the table. "It must be the canteen," she thought at the time.

At age 22, Shi was transferred from the provincial information center to the library to help build a digital catalog database. After a year, the human resources department asked her to join the book restoration team because one of the five members would soon retire.

"The first time I walked into the 'canteen room', I figured out that it was my future office. I was desperate. The air had a musty smell. Five workers sat around a shabby desk, fiddling with some tattered books. One of them was removing insect feces with tweezers," she said, adding that the team's daily articles, such as thermos flasks and bowls, covered every available space.

"So that's the end of my bright, promising future, I thought to myself. Seeing me frowning and speechless, a worker said: 'How about giving it a try?' I never thought I would do it for my whole life."

At the time, Shi was the only young team member, as all her colleagues were about 50. For the first three years, she learned from the retiring employee, Tan Guo'an, who is now 79. Shi, a film advertising graduate, was a greenhorn who had to learn every basic skill.

Shi Wenlan carefully cleans a page of an ancient book that was damaged by insects at the Hunan Library in Changsha, Hunan province.

"The most difficult part was aligning the restored pages before binding the book. Trainees had to practice hundreds of times," she said. "Great patience is required not to mess anything up."

The job affects her health. Mold and bacteria from the books cause skin diseases, while years of desk-bound work have caused pains in her neck and shoulders.

Immobility may also make things worse for Shi, who limps on her right leg because of a childhood illness. Despite that, she wants to stay with the work. "I feel the beauty of ancient Chinese culture. I believe it is the best job," she said.

Shi said most of the ancient books in the library are available for people to borrow. The only ones that are off-limits are very special and precious. Readers include college students, researchers and elderly people.

Many seniors, in groups of three or four, have asked to use books to trace their possible family trees, and some of the books were collected from a cultural relics market.

Some readers leave comments in the guest book. One, surnamed Luo, wrote that he felt excited when he read the records about his grandfather and great-grandfather.

Another, named Yang Xiang, the great-great-grandson of Yang Yuebin, a general in the late Qing period, wrote that he wanted to thank the library for providing him with the opportunity to learn about how his ancestors contributed to the development of Northwest China.

Meanwhile, after viewing the genealogy related to his ancestors, Ma Zhiyong－a descendant of Ma Yin (852-930), an emperor of the Kingdom of Southern Chu, which existed in Hunan during the period of the Five Dynasties and Ten Kingdoms (907-960)－wrote, "Every piece of history, either that of a country or a family, matters."

Shi said: "If ancient books can be read and used, their life span is lengthened and the value is extended. I feel honored to contribute."