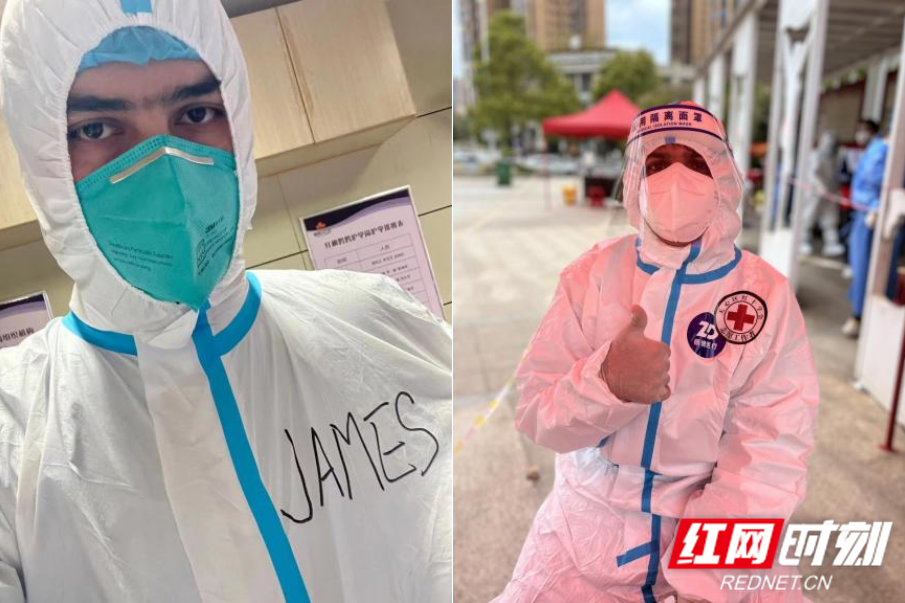 James and Kelvin working as volunteers. 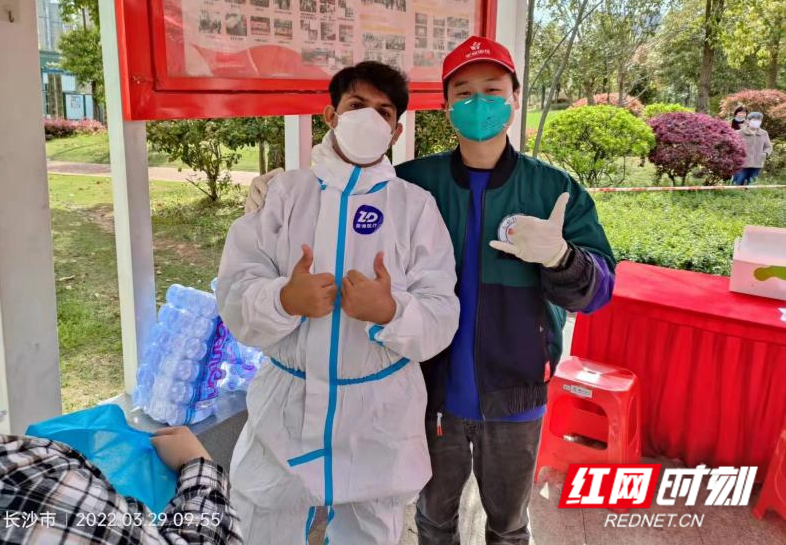 Photo of Fu Haole and Kelvin during the epidemic prevention and control voluntary work.

They are foreigners, but not outsiders

“I am a foreigner, but I am not an outsider. ”In March this year, at the bottleneck of the epidemic prevention and control, these words touched many people in Changsha and major news outlets in Hunan. These are the true feelings of Kelvin, a Pakistani student and a volunteer for epidemic prevention, when interviewed by reporters.

“I’m not tired, I’m really not tired, I’m a foreigner, but I’m not an outsider, how can I be tired if I’m not an outsider?” he said, wearing protective suits, through the thin white fog on the protective mask. James, a Canadian student, is also a volunteer. These two people, who do not know each other, mentioned something in common in the interview that they got in touch with the volunteer organization through an intercultural exchange organization, and finally successfully became the two most special volunteers for nucleic acid test in Star City this spring.

In fact, not long ago before Kelvin and James participated in voluntary services, a post, titled as “the anti-epidemic world youth team is recruiting”, was widely shared in the WeChat moments of international students in Changsha—“In order to better serve the local community and bring an end to the epidemic quickly, the community leader decided to respond to the voluntary actions for epidemic prevention from Red Cross Society of China Changsha Branch, to recruit person from all over the world to form a anti-epidemic youth team, and to fight the epidemic with our enthusiasm! ”

The screenshot of the post “Recruitment for a multinational teamof epidemic prevention”.

The two learned about and participated in the voluntary works for epidemic prevention through this post about “recruitment ”.

If he had to use only one phrase to describe himself, Fu Haole would chose social butterfly, which is quite different from the stereotypes of a bridge engineer, such as calm and serious.

A sociable person is also the deepest impression that most people will have when they first meet him. With rays of sunshine illuminating his face, he is imbued with vitality—paralleling the brightest weekend of Changsha's April month 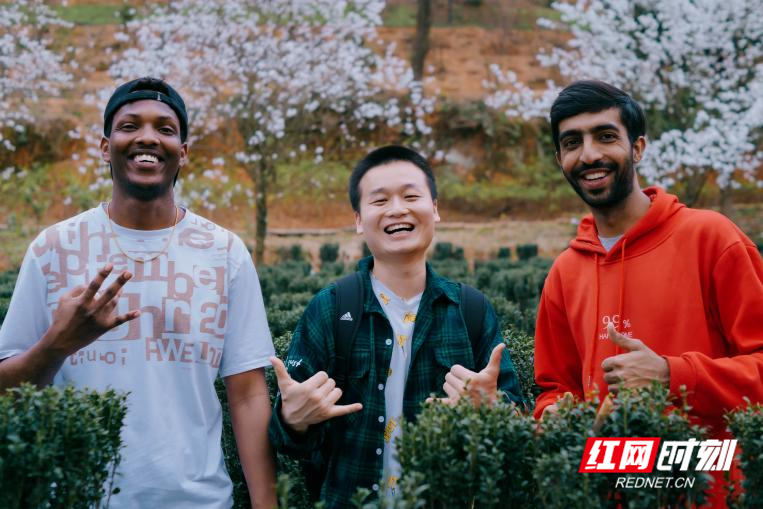 Fu is willing to understand diverse cultures and make friends with people from different backgrounds. While studying at the University of Sydney in Australia, Fu was fulfilling his life with various activities. In his spare time, he had participated in hundreds of large and small events, no matter whether they are volunteer activities, different forms of lectures or offline social activities, and had“evolved” from the a participant to an event planner.

After Fu returned to China in June 2020, the orderly life under the “dynamic zero-COVID policy” have ignited a spark in his life once again. He gathered his friends who also embrace multiculturalism together and formed a small “Multinational Circle” in Changsha.

His colleague Le Xinyi is one of the four core members, who first responded to his idea. She is also the operational “community leader” who is responsible for publishing information and planning various activities. Le Xinyi doesn't talk much but always has a warm smile on her face. Contrary to her appearance, she always has all kinds of novel ideas and creative inspirations, and can also arrange participants of these activities in an orderly manner.

“The other two core members are Eric, who is from Australia, and Robert, a Chinese Canadian student. Eric is ‘the man in charge of everything’, and Robert is the photographer of the team. We use our spare time to plan and to organize activities. With just the four of us as the core, we have organized more than ten meaningful intercultural exchange activities in more than a year.”, Le Xinyi introduced.

Robert’s ancestral home is Hunan. After came to China, he had lived in Shanghai for a while. He said, “I feel the expats community (in Shanghai) is much bigger. But in Changsha it is definitely smaller, but people know each other. I feel it is less intimidating to approach foreigners. In Changsha, everyone is tightly knitted. We would have been a group of people with completely different walks of life, but because of Changsha we have known each other and become the closest friends. Sharing each other's culture and enjoying each other's interests have become a big part of my life. ”

“I hope the foreign friends who come to Hunan can experience warmth and tolerance that I had experienced when I studied in Sydney. I also hope everyone can make full use of their strengths, and we can grow together. We will look for an open world in exchange activities and find ourselves with more fulfilled inner selfs”, Fu said.

After the new COVID-19 pandemic, Martin Woesler, a professor at Hunan Normal University and also a German sinologist, who had returned to Europe to visit his family, attempted to return to Changsha, his familiar campuses and students couple times. But it was not until the fourth time that he could get tickets to come back.

He told reporters that the number of foreigners in Changsha has reduced in recent years, “Under the barrier of the epidemic, our gathering has become particularly precious. ” 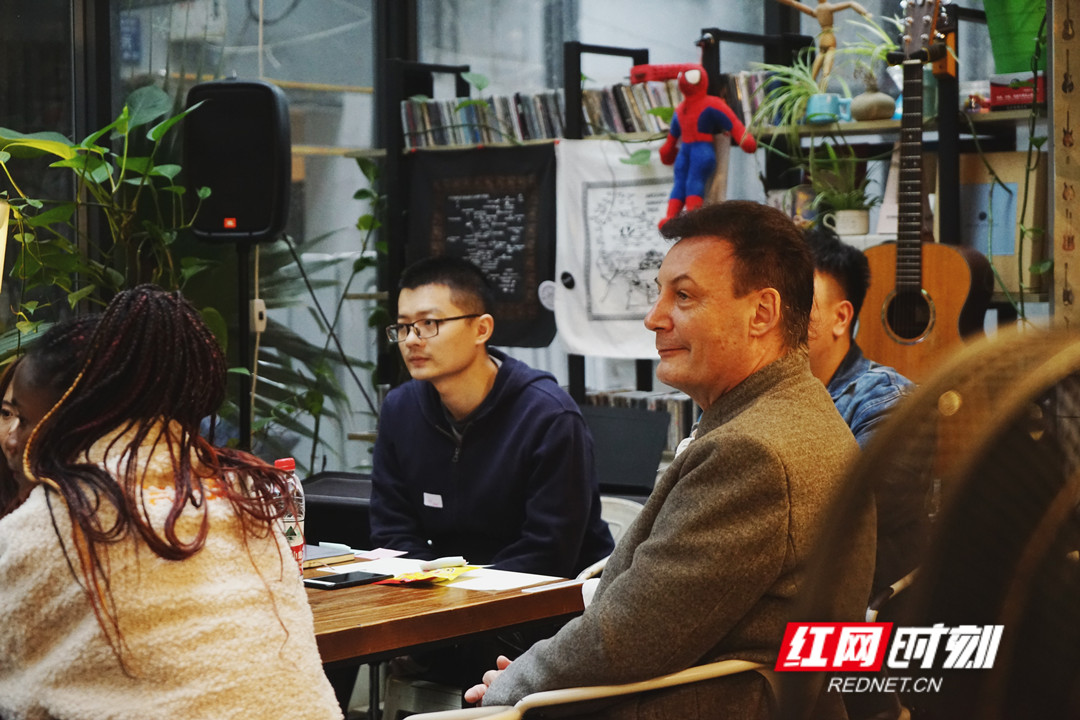 Martin Woesler is taking a part in an intercultural exchange activity organized by “Multinational Circle” .

He spoke highly of these intercultural exchange activities, “For foreigners living in Changsha, this is the best opportunity to deepen communication and connection with the locals; for locals, it provides a platform to practice languages and broaden their horizons. ”

“It’s very important for young people to understand the outside world. The epidemic can obstruct us physically, but it can’t stop us from intercultural communication. Only by widely communicating and establishing understanding with people from diverse cultural backgrounds can we broaden our minds and visions”, Martin Woesler thinks.

Nana during the activity.

Studying in the medical department of Hunan Normal University, Nana, an international student from Ghana, is a good example. Since the outbreak of COVID-19, some courses have changed to be taught online, and many her classmates have returned home. As an introverted girl, she once felt helpless.

“I love Hunan cuisine and Hunan culture. In the past, lack of proper language skills limited me in many ways, but numerous intercultural exchange activities gave me a platform and an opportunity to integrate with the local culture and make local friends. These weekly activities make me more outgoing and lively ", Nana said.

“Hunan has many tourist attractions and has such beautiful environments. I live at the foot of Yuelu Mountain. I see the lake when I look out of the window. Beautiful pavilion.” Martin discussed that he has taught in Hunan for many years, and many of his students have engaged in relevant works under such abundant tourism resources.

Next, he will work with his friends from the “Multinational Circle” and bring a series of short videos, titled as “Global views on Hunan”, under the assistances from RedNet (Hunan Times). The video will use an intercultural perspective and take audience to experience delicious cuisines, beautiful sceneries, traditional folk customs, histories, cultures and urban memories of Hunan.