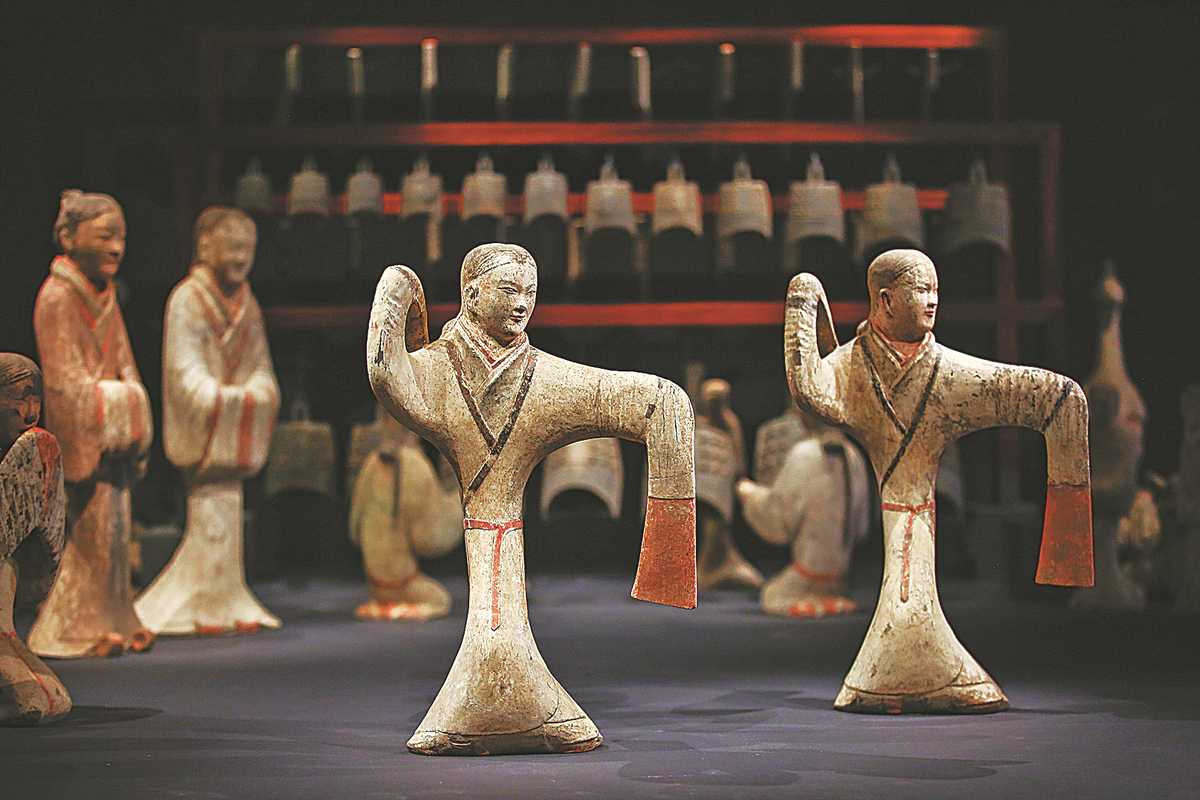 More than 5,200 cultural relics unearthed in archaeological excavations across Shaanxi province in the past few decades are on display in the Shaanxi Archaeology Museum in Xi'an. The museum opened to the public on Thursday. Photo by CHINA DAILY

China's first comprehensive museum focusing on archaeology opened to the public on Thursday in Xi'an, the capital of Shaanxi province.

The Shaanxi Archaeology Museum was first proposed in 2009. After several years of preparation, construction began in 2019, and it was completed in December. The building has a total floor space of 36,000 square meters.

From stone relics of the prehistoric city ruins of Shimao about 4,000 years ago to the abundant artifacts from the mausoleums of emperors at the zenith of the Chinese imperial period, more than 5,200 cultural relics unearthed over the past 60 years in archaeological excavations across the Shaanxi province now have a venue for display.

Shaanxi is home to many famous archaeological findings, such as the 2,200-year-old Terracotta Warriors in the mausoleum of Qinshihuang, the first Chinese emperor, in Xi'an.

As the capital of the Western Han (206 BC to AD 24) and Tang (618-907) dynasties, the two social and cultural peaks in Chinese imperial history, Xi'an and its neighboring area provided crucial reference points for studies on urban construction, funerary customs, social structures, and the formation of central dynasties in ancient times.

Exhibits in the new museum are from discoveries made by the Shaanxi Academy of Archaeology, one of the most prestigious institutes for archaeological studies in China. Over 200,000 cultural relics were collected by the academy.

Unearthed relics have been a main source of exhibits in Chinese museums, and themed museums have been set up for many key archaeological sites, like Qinshihuang's mausoleum. However, a facility such as the new museum, covering a larger region and relying on the inventories of an archaeological institute, is unprecedented in China.

"Through the relics and the heritage sites, people can see the clear lineage of Chinese archaeology," said Sun Zhouyong, director of the museum and head of the Shaanxi academy.

Visitors can see some of the most recent major finds that have sparked widespread public discussion. For example, there is the unprecedented find of an early work by the iconic Tang Dynasty calligraphy master Yan Zhenqing, which was a woman's epigraph carved on her tombstone on the outskirts of Xi'an.

After years of dispute, the location of the mausoleum of Liu Heng, the third emperor of the Western Han, who has become historically famous as being a diligent ruler, was finally confirmed after the discovery of abundant burial objects.

Sun added that the new venue aims to demonstrate not only the beauty of the cultural relics, but also offer extensive information on the locations where they were excavated. Some exhibits might be unattractive to the eye, but they contain key clues for academic breakthroughs.

"With this museum, we can in time share our findings on cultural heritage with the public," Sun said. "And it's also a place where the public can come to understand archaeologists' daily lives and multidisciplinary research methods."

For that reason, broken artifacts like ceramic shards and earthen architectural foundations are also showcased in the museum. Several archaeological work sites were relocated to the new museum as "whole packages".

For example, the findings from a luxurious funeral pit with burial horses and bronze chariots, first excavated in 2014, from a 2,800-year-old aristocrat's tomb were carefully moved from the site in Baoji of Shaanxi for detailed research in a lab. That was also done for a Mongol-style tomb with exquisite murals from the Yuan Dynasty (1271-1368) that was first found in 1998.

A gallery in the museum features the conservation of cultural relics for the public.

"An archaeological museum is a new museum format in China," said Zhou Kuiying, deputy director of the Shaanxi Provincial Administration of Cultural Heritage. "It's a chain linking archaeological excavations, studies, conservation of relics and public education."

The museum will accommodate up to 1,500 visitors daily until the end of July. Online reservations are needed and entry is free of charge. It is closed on Wednesdays.