The digital age: Mom and Dad! Let’s go together and stay in tune

“Digitization”, perhaps in the eyes of many young people, refers to convenient tools for them to surftheInternet;however, in the eyes of some old people, it seems to be like a primitive jungle that is hard to explore and full of danger.Digitization cannot and should not be exclusive to some people, but rather bring convenience to all.

We are delighted to find that at present, the elderly’s integration and acceptance of digitization has been paid more and more attention by the society; more and more people and enterprises have been givinghelpinghands to the elderly to make the elderly feel “no leaving behind” in the digital era, which will undoubtedly and greatly promote the elderly-oriented development of Internet applications and truly realize the original intention of “Technology for Social Good”.

Grandpa, grandma, dad and mom, let’s learn together and not left behind by digitization...

May 17 is the World Telecommunications Day, and the theme this year is “Digital technologies for older persons and healthy aging”. Since the birth of the Internet, human society has made unprecedented and rapid progress. information and digitization have made our lives more colorful. But at the same time, in the face of rapid changes, some people will feel out of the pace, especially the elderly, who have gradually fallen into a kind of “learning fear”.

How to care for the elderly? It’s better to act than to shout slogans!

According to the data of China’s Seventh National Census:

China’s population aged 60 and over has reached 260 million, accounting for 18.70% of the total population. According to the United Nations classification standards, this means that China is very close to a moderately aging society. Moreover, the World Health Organization also predicts that 35% of China’s population will be over 60 years old in 2050, and two out of five people will be elderly.

In 2021, the overall scale of China’s Internet users continued to grow. China’s existing administrative villages have fully realized “broadband access to all the villages”, and the demand of the elderly group for connection of Internet, access to Internet and use of the Internet has been further stimulated. By December 2021, the scale of China’s elderly Internet users aged 60 and over has reached 119 million, and the Internet penetration rate has reached 43.2%.

The elderly-oriented transformation of Internet applications has become a problem we can’t avoid. 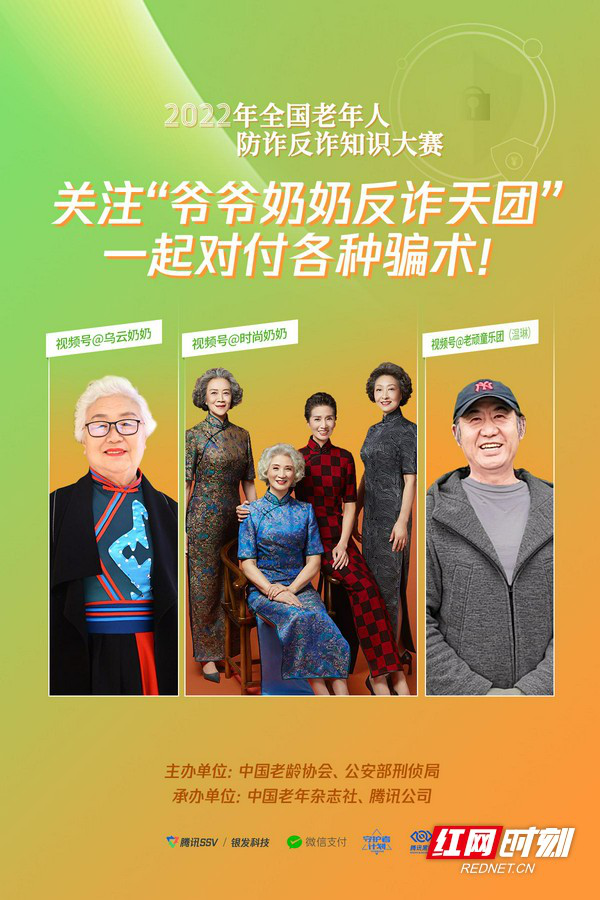 The elderly are eager to integrate into this digital life. The Internet has helped the elderly build a rich and cool digital stage, and a large number of “Grey hair” influencers have emerged to show the healthy, positive and upbeat mentalattitude of the elderly to the society.

Recently, during Guanchaojun’s interviewonthestreet, nearly 80% of the 20 surveyed elderly expressed their intentions to integrate into digital life. They do not want to “fall behind” in this digital era, and are very willing to learn to use smart phones.

However, they also said that due to the decline of memory and learning ability, and the complexity of online application operation for them, they have to do repetitivelearning on using the Internet, and they feel it is very hard. Granny Cao told Guanchaojun: “Sometimes, my daughter taught me once, twice or three times, but later I forgot again. I was embarrassed to ask the same question five or six times, and I felt my self-esteem is hurt... ”

But if you don’t ask, it will affect your life and eventually trouble others. Granny Cao felt that, especially affected by the global epidemic in recent years, it is necessary to scan and check the code frequently. It is difficult to go out without the “code” according to the requirements of epidemic prevention and control.

Many parties try to bridge the “digital divide” of the elderly

The original intention of digital services is to make users feel convenient. However, complex operations increase the discomfort of the elderly to a certain extent. The reality of China’s aging population and the “dilemma” of the elderly are raising widespread concern in the society, and more and more science and technology enterprises and start-ups are beginning to pay attention to it, and attempt to bridge the “digital divide” for the elderly. 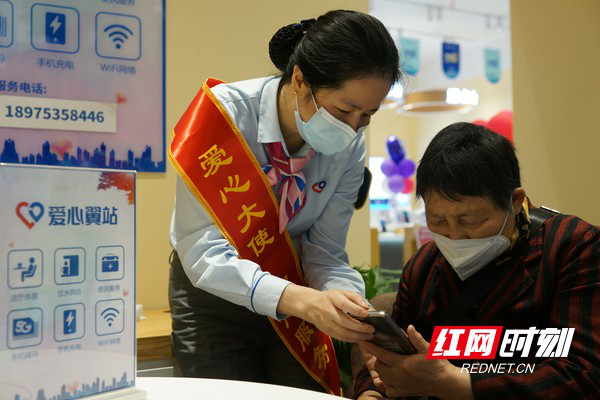 Major companies have launched a series of new measures to adapt to elderly-oriented services to help the elderly integrate into the information society.The picture shows the staff of China Telecom in Zhuzhou serving the elderly.

For example, Tencent has developed a series of application technologies in the field of intelligent elderly care, including fall detection, invisible guardrail, fire detection and other functions by using public cameras and depth sensing devicesin private areas with AI algorithms.

Among them, the “Yunxiaowei” intelligent service system specially designed for the elderly can not only provide the elderly with event information and news access through AI voice assistant, but also solve the problem of typing through voice input.

For a considerable number of middle-aged and elderly users, Wechat also officially launched the care mode on September 27, 2021, which has larger and clearer words, stronger colors, better recognition, larger buttons that are easeof use. 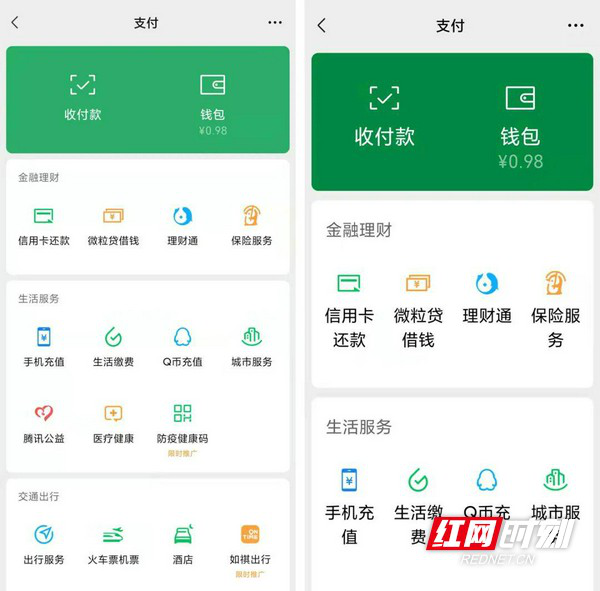 Wechat launched a caring model, with larger and clearer words, stronger colors and better recognition. Guanchaojun believes that the boundary of behavior habits between the elderly and young people has actually become more and more blurred. Many consumption patterns used by young people can be common among the elderly.

Therefore, the transformation have to meet with the elderly’s need!

In Hunan, China Unicom, China Telecom and China Mobile have launched exclusive packages for the elderly, including Yinling cards, Xiaoxin cards (for old people), etc., and they are matched with products that are moderately priced and have simple operation and application. They provide special functions such as exclusive directional data for the elderly, anti-fraud website reminders, harassing phone interception, showing real-timelocation of the elderly. Also they set up a “special line for the elderly” in their servicehotline to provide priority access to manual services for elderly people over 65 years old, so as to help the elderly users solve difficulties.

In addition, they also optimized the application based on needs commonly asked by the elderly, took considerations of the visual impairment of the elderly as much as possible, opened the “care version” page for users, sent bill with largefont and offered exclusive discounts for the elderly.

At present, in many government halls, banks, hospitals and other public service places, we can also see “AI intelligent robots” to provide reception, explanation, guidance and other services for the elderly. 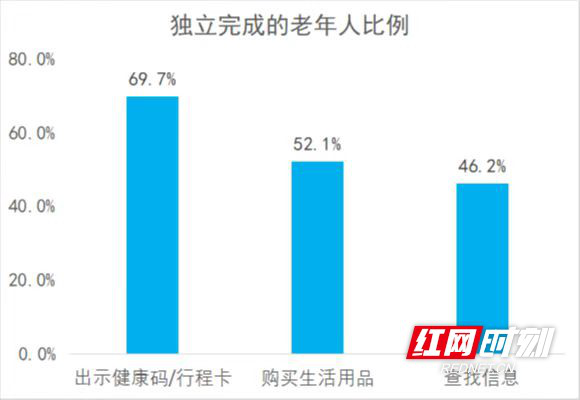 Benefiting from the continuous promotion of Internet application for elderly-oriented transformation, more and more elderly groups are able to complete some online activities independently.

Let’s embrace this new digital era together with the elderly

Thanks to the continuous promotion of Internet application on elderly-oriented transformation, the elderly group can enjoy the achievements of information development with other age groups.

Statistics show that the proportion of elderly Internet users who can independently complete online activities such as presenting health codes/travel codes, purchasing daily necessities and searching information has reached 69.7%, 52.1% and 46.2% respectively.

However, some people in the industry believe that in order to completely solve the “dilemma” faced by the elderly in the digital age, these things alone are not enough. “We still have a long way to go, but it is gratifying that all parties are working hard together. ”

In April 2022, the State Council issued “The national plan for the development of the cause of aging and the elderly care service system during the 14th Five-Year Plan”, encouraging the development of monitoring and lost-prevention products for the elderly, improving the intelligent level of elderly-oriented equipment such as health monitoring products, elderly-care monitoring devices and home service robots; It will accelerates the scientific and technological innovation of health monitoring and testing equipment such as elderly wearing equipment, elderly ability assessment and daily activity training equipment, sleep detection and obstacle intervention and health examination machine, and speeds up the in-depth application of information technology and intelligent hardware such as Internet, big data, artificial intelligence and fifth generation mobile communication (5G) in the field of elderly products. Staff promotes knowledge about the digital age for the elderly on the streets.

During the “14th Five-Year Plan” period, we will carry out actions to improve the application ability of intelligent technology for the elderly, and regularly promote training and assistance services such as learning smartphone applications for the elderly, so as to improve the digital skills of the elderly. At the same time, we will strengthen the adaptive transformation of elderly care services, focus on the high-frequency matters in life such as hospitalregistration, rehabilitation and discharge from hospital, emergency rescue and car-hailing of the elderly, expand the “one touch to do anything” service, and let the elderly enjoy the convenience brought by intelligent services.

The relevant person in charge of Hunan Mobile also said: The elderly’s integration and acceptance of digitization has been paid more and more attention by the society. More and more people and enterprises have been givinghelpinghands to the elderly and looking forward to see them enjoy this new era of digitization.

In order to bring a social friendly environment for the elderly, the China Association for Aging also launched the “Yinling Program (promote employment for the elderly) ” in cooperation with Tencent Wechat, hoping to help 10 million elderly people learn digital skills and integrate into digital life within three years. It can truly bring the elderly-oriented transformation into practice, provide warm and considerated services for the elderly, and provide the solution of the difficulties faced by elderly users in using digital skills.