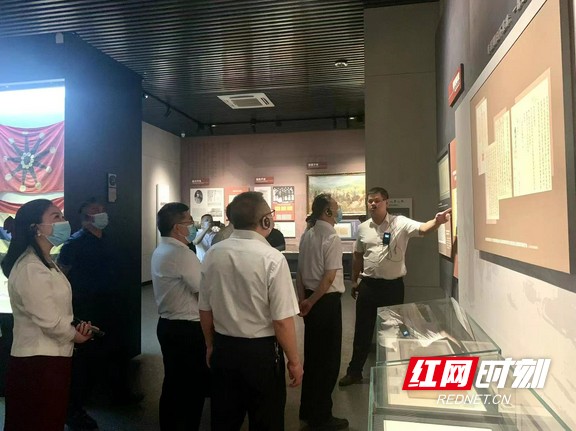 On June 15th, Li Zuyuan, a member of the Party committee and the vice chairman of the Provincial Federation of Returned Overseas Chinese, led a team to Shaoyang to inspect Cai E’s former residence and memorial hall, and Hunan Xiangjiao Wine Co., LTD., and held a symposium on the construction of overseas Chinese cultural exchange base.

This inspection aims to find potential problems. On the basis of sorting out the current status of the base, summarizing and refining experience, digging out existing problems, and putting forward suggestions for improvement, this trip will conclude with a special investigation report titled “Research and Thinking on Better fulfilling the Role of the Overseas Chinese Cultural Exchange Base in Hunan Province in the New Era”. It will become a referential document to promote the comprehensive strengthening of the construction of the exchange base in the future, to give better support to the exchange base platform. Also it can play a greater role in uniting the strength of overseas Chinese, carry forward excellent Chinese culture, spread the voice of Hunan and China, and facilitate the high-quality development of the work of the Federation of overseas Chinese in the new era.

In the exhibition hall of Cai E’s life, the inspection team visited the four exhibition halls. Through text, pictures, cultural relics, videos and other materials, the team reviewed Cai E’s life of fighting with the feudal autocracy and pursuing republic democracy. The inspection group was affected by his patriotism, outstanding moral character and adherence to truth and honesty. They said that they will promote these sites, Cai E’s former residence and memorial hall, in greater efforts, so that more Overseas Chinese could walk into these places, listen to the stories of this hero and pursue the spirit of revolution.

In Hunan Xiangjiao Wine Industry Co., Ltd., after the inspection team visited the baijiu workshop and Xiangjiao product showroom, etc., they had a detailed understanding of wine-making process and the enterprise’s development process. Also they experienced the process of blending base wine, and learned about the production and operation status of the enterprise.

The company is a large-scale baijiu enterprise belonged to Jindong group. In recent years, Xiangjiao Wine industry has become a golden business card of Shaoyang for friendly cultural exchanges with foreign countries. It has hosted more than 60 batches of around 3000 people from Japan, South Korea, Benin, Laos, Thailand and other foreign envoys and businessmen in China, and overseas Chinese and compatriots from Hong Kong, Macao and Taiwan. It has also assisted in organizing the visits and activities of overseas Chinese arranged by the Hunan Federation of Returned Overseas Chinese.