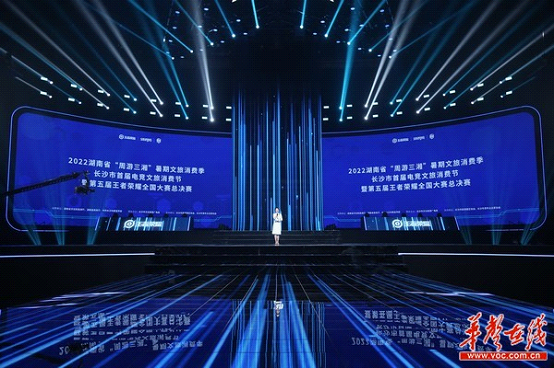 At the launching ceremony.

The cultural tourism consumption season is hosted by the Hunan Provincial Department of Culture and Tourism and the Hunan Provincial Department of Commerce. Four themed activities will be held, including "Hunanese touring around Hunan", "Tourists from other provinces visiting Hunan", "Taking Weekend trips in Hunan", and "Highlights of dining, accommodation, transportation, shopping and entertainment". Thirteen cities and one prefecture across the province will introduce more than 80 preferential policies on cultural tourism consumption, hold 304 cultural tourism activities, promote 99 quality travel routes, and 191 "micro-tourism" internet-famous sites.

As a main event of the cultural tourism consumption season, the fifth Honor of Kings National Finals is scheduled to take place in Changsha from June 29 to July 3. Eight teams from across the country would compete for the championship.

A series of e-sports and cultural tourism consumption events will be arranged during the first Changsha E-sports Cultural Tourism Consumption Festival, which is part of the fifth Honor of Kings National Finals. An immersive and interactive e-sports challenge season will be held. Ten scenarios on e-sports and cultural tourism consumption will be created in Orange Isle, the Window on the World, Tongguan Kiln Ancient Town, HB Film Town, Xiangjiang Joy Town, and other places. Online e-sports challenges will be organized and vouchers will be offered to spur consumption in physical stores. Based on cooperation with key universities such as Hunan University, a number of activities will be carried out to promote Hunan culture and intangible cultural heritage.