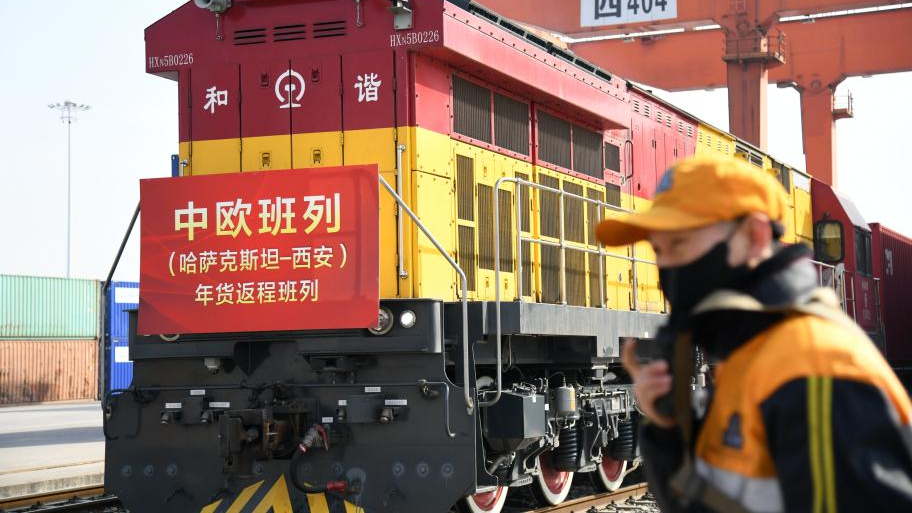 Editor's note:Djoomart Otorbaev is a former prime minister of Kyrgyzstan, a distinguished professor of the Belt and Road School of Beijing Normal University, and a member of the Nizami Ganjavi International Center, a think tank in Azerbaijan. The article reflects the author's views and not necessarily those of CGTN.

The Western sanctions against Russia pose a massive threat to the development and existence of the Eurasian railway route connecting China with Europe via its northern corridor, which passes through Russian territory.

All countries along the route are analyzing the potential negative consequences of restrictions and the possible suspension of operations. A global rethinking of regional development, security and investment strategies has been triggered. Many agree that Russia and Kazakhstan will feel the most severe long-term consequences of a restriction or suspension in the logistics chain as a large amount of rail traffic passes through their territory.

Rail traffic across Russia proceeded on schedule during the first few weeks after the outbreak of hostilities in Ukraine, as the operators had placed orders for transport in advance. However, while transit using the state-owned Russian railway company, which is subject to sanctions, is still technically possible, many Western logistics companies are effectively suspending their operations on the overland rail route.

Russian Railways is on the EU and the U.S. sanctions list as a state-owned company, but so far they are only financial sanctions related to the capital markets. Legally, doing business with the company is still possible, so logistics companies can still use its services.

However, the point is not legal restrictions but the moral and reputational motives of the participants in the transportation market. The Western world is now focusing on ethical decisions and values.

The imposition of wider sanctions against Russian Railways would put an immediate end to all transit. Such a development would be a big shock to the Chinese and European companies accustomed to fast and efficient transportation by rail. At a briefing on January 5, the Chinese Foreign Ministry called the Eurasian railway bridge an "anchor of stability" in global supply chains. Now there is a risk that this may not be the case.

For example, on March 9, German logistics company Hapag-Lloyd confirmed that it is no longer accepting orders where Russia, Belarus and Ukraine are involved. The next day, DB Schenker, another major German logistics provider, announced that it was temporarily suspending land, air and sea transportation to and from Russia.

The most severe threat to the very existence of the land bridge is the statement by the administration of the dry port of Duisburg, the leading European hub for transportation from Asia, that international insurers would in all likelihood stop insuring goods in transit via the northern corridor through Russia or Belarus.

The economic and financial impact of sanctions and traffic restrictions will hurt all countries along this route. There are similar risks for transit traffic between China and Central Asia. China's 13th Five-Year Development Plan (2016-2020) specifically tasked Xinjiang Uygur Autonomous Region, which borders Central Asia, with strengthening infrastructure development along the main routes and main ports of entry. The plan also aimed to develop Xinjiang as the core region of the Silk Road Economic Belt, the overland component of the Belt and Road Initiative.

China is seeking greater economic integration with Central Asia to promote confidence, security and stability along its northwestern borders. 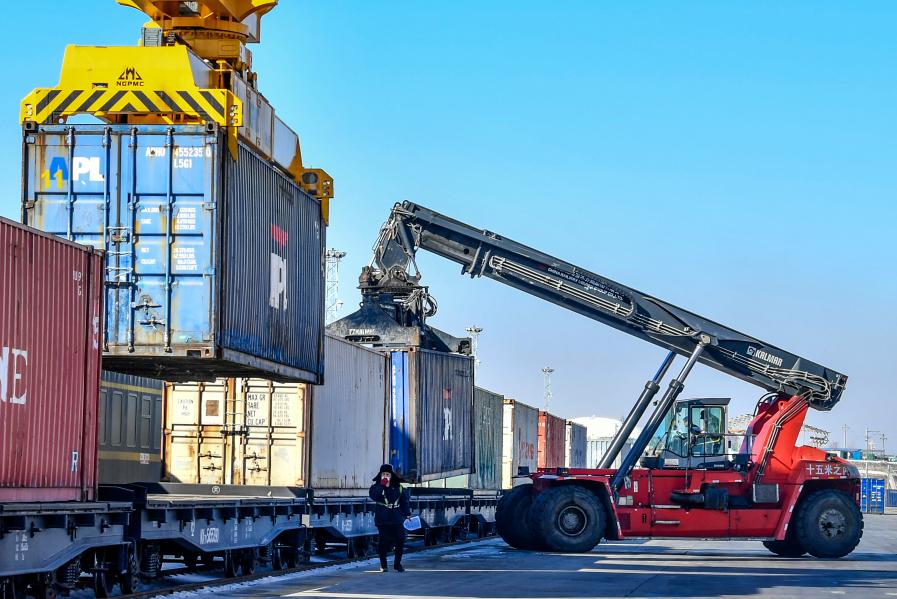 A container is loaded onto a train at the Urumqi China-Europe Railway Express Hub in Urumqi, capital of northwest China's Xinjiang Uygur Autonomous Region, March 12, 2020. Photo by Xinhua

Kazakhstan is a leading country in Central Asia in terms of the massive volume of goods that pass through China to Europe. The Kazakh government has included strengthening transit trade in all recent development strategies. The significant growth in this trade in recent years has dramatically impacted the development of its economy and increased budget revenues.

What are the alternatives for rail transport between China and Europe if the northern corridor is not viable? Many experts believe these cargo flows will switch to other routes. Using railway corridors outside Russia, such as the Trans-Caspian International Transport Route (TTITR) via Kazakhstan, Turkmenistan, Azerbaijan, Georgia and Turkey, is a possible solution. But so far, the TTITR is also an expensive solution.

Admittedly, traffic on the TTITR has been growing steadily since its launch in 2017. In the first year, about 300 containers used the corridor. But in 2021, the number jumped to more than 7,000 in the first six months. The main contributors to the growth were Chinese companies, which consider TTITR a profitable and faster transportation option than crossing oceans.

Recently, Turkey has been paying particular attention to this route, bearing in mind the increase in trade volumes with China and the fraternal Central Asian countries.

In the medium term, the current restrictions on transportation through Russian territory may increase interest in constructing the shortest southern Eurasian railway route from China through Kyrgyzstan and Uzbekistan and further through the countries of the South Caucasus and Turkey to Europe.

At the virtual summit of the presidents of China and the countries of Central Asia, held in January, the leaders of China, Kyrgyzstan and Uzbekistan confirmed their interest in building a southern railway route.

President Xi Jinping said China would speed up designing a railway along the new southern China-Kyrgyzstan-Uzbekistan route. It would be necessary to agree on its optimal path, financial and economic model, and a project management method.

Financing schemes and management of the route would form a special type of international agreement between the partners. To find the optimal mechanism for financing, operating and managing the project, using the experience of building similar international projects is critical.