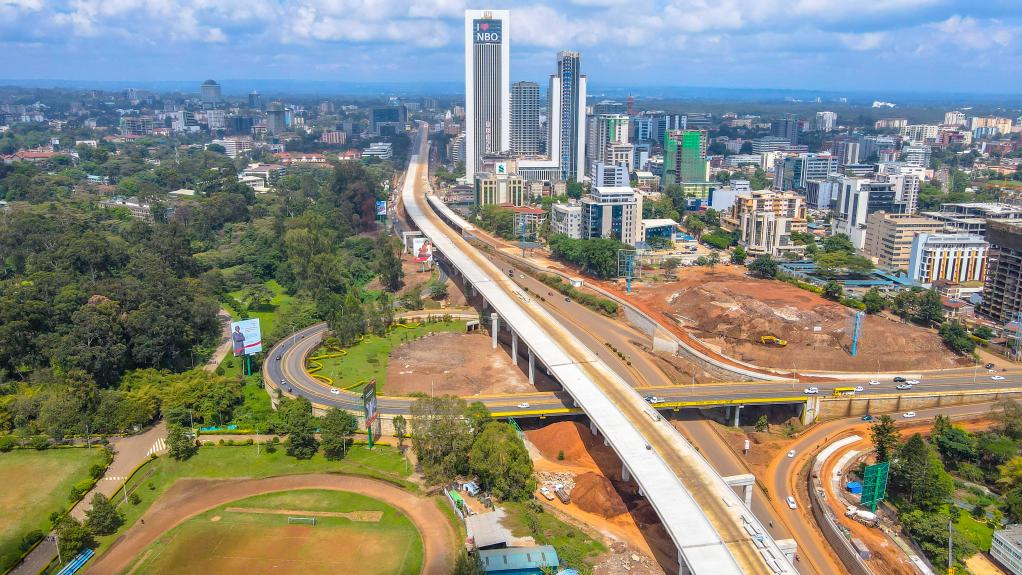 Photo taken on Dec 7, 2021, shows a section of the 27.1-km Nairobi Expressway which is being constructed by the China Road and Bridge Corporation (CRBC) in Nairobi, Kenya. Photo by Xinhua

China has played an essential role in Africa's supply chain development by addressing related challenges, such as the COVID-19 pandemic and regional conflicts, and has helped improve socioeconomic development on the continent, African officials said on Tuesday.

The remarks were made at a ceremony marking the release of a report published by the China-Africa Business Council on China's investment in Africa. From a supply chain perspective, the report showcased efforts made by Chinese enterprises to improve Africa's supply chain and support the independent and sustainable development of Africa.

Rahamtalla M. Osman, permanent representative of the African Union to China, said the Forum on China-Africa Cooperation and the Belt and Road Initiative are closely aligned with Africa's development blueprint and strategies, such as the AU's Agenda 2063 and the African Continental Free Trade Area.

He also said that by 2021, China's trade with Africa had increased twentyfold, and its investment stock in Africa saw a hundredfold increase since 2000. More than 3,800 Chinese enterprises have invested in Africa, he added. "All of this has contributed to China-Africa cooperation in supply chain development."

According to the China-Africa Business Council report, China has been Africa's largest trading partner for the past 13 years and was Africa's fourth-largest bilateral investor in 2021.

Mary Muthoni Gichohi, Kenya's ambassador to China, said China has always firmly supported Africa's development, adding that the report was of great significance to the development of Africa-China relations.

The report will help promote comprehensive Africa-China cooperation and bring more much-needed investment to the continent, she said.

Teshome Toga Chanaka, Ethiopia's ambassador to China, highlighted China's contribution to infrastructure in his country and called for more such investment.

He noted that the China-built Addis Ababa-Djibouti Railway has improved logistics and said its success can help draw more outside investment.

Theophilus Mwendwa Mutui, managing director of the Kenya Plant Health Inspectorate Service, said via video link at the conference that it was a practical step for China to help Kenya's development, and he hoped to further promote economic and trade cooperation with China.