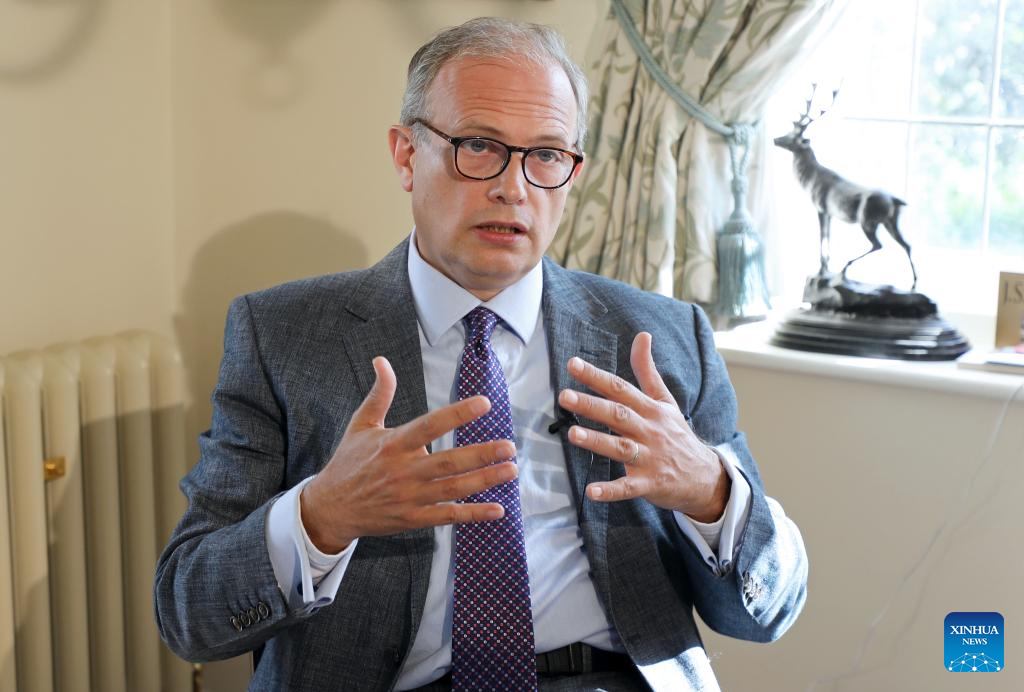 Jean Christophe Iseux von Pfetten, president of the Institute for East-West Strategic Studies, gestures as he speaks in an interview with Xinhua in Peterborough, Britain, Sept. 16, 2022.Photo by Li Ying,Xinhua

The ability to meet people's needs and adapt to domestic and international changes has enabled the Communist Party of China (CPC) to lead China to successive victories, an expert here said.

"A major achievement of the CPC is the total eradication of absolute poverty in China," said Jean Christophe Iseux von Pfetten, president of the Institute for East-West Strategic Studies in Britain.

Pfetten noted that China's poverty alleviation achievement was realized 10 years ahead of the 2030 Agenda for Sustainable Development adopted by the United Nations.

Another achievement of the CPC is accomplishing its first centenary goal of building a moderately prosperous society in all aspects, he said.

Furthermore, the CPC has delivered a new democratic model to the world -- socialist consultative democracy, providing an alternative to the Western democratic model, he said.

"The success of the CPC comes from a constant adaptation of the party to the needs of the people and to the reality of the world at large," he said.

Pfetten, 54, was born in France, and one of his ancestors created a work-study program for young Chinese people in his factory in the early 1900s. Pfetten studied Chinese at an early age and speaks the language fluently.

In recent years, Pfetten has participated in various academic exchange programs and investment-promoting activities to contribute to China's development projects. He was awarded a certificate of honor for helping impoverished women and children in the rural areas of northeastern China's Liaoning Province.

Pfetten is dedicated to studying China and the CPC and has written more than 2,000 pages of relevant research notes.

Talking about the upcoming CPC National Congress, Pfetten said he believes that it will be a significant meeting for China and the rest of the world, given China's weight in the international community and the global economy.

He praised the CPC for positioning the Chinese people at the center of its work.

"It's a party of people," Pfetten said. "And the party evolves and moves with the evolution of the people."