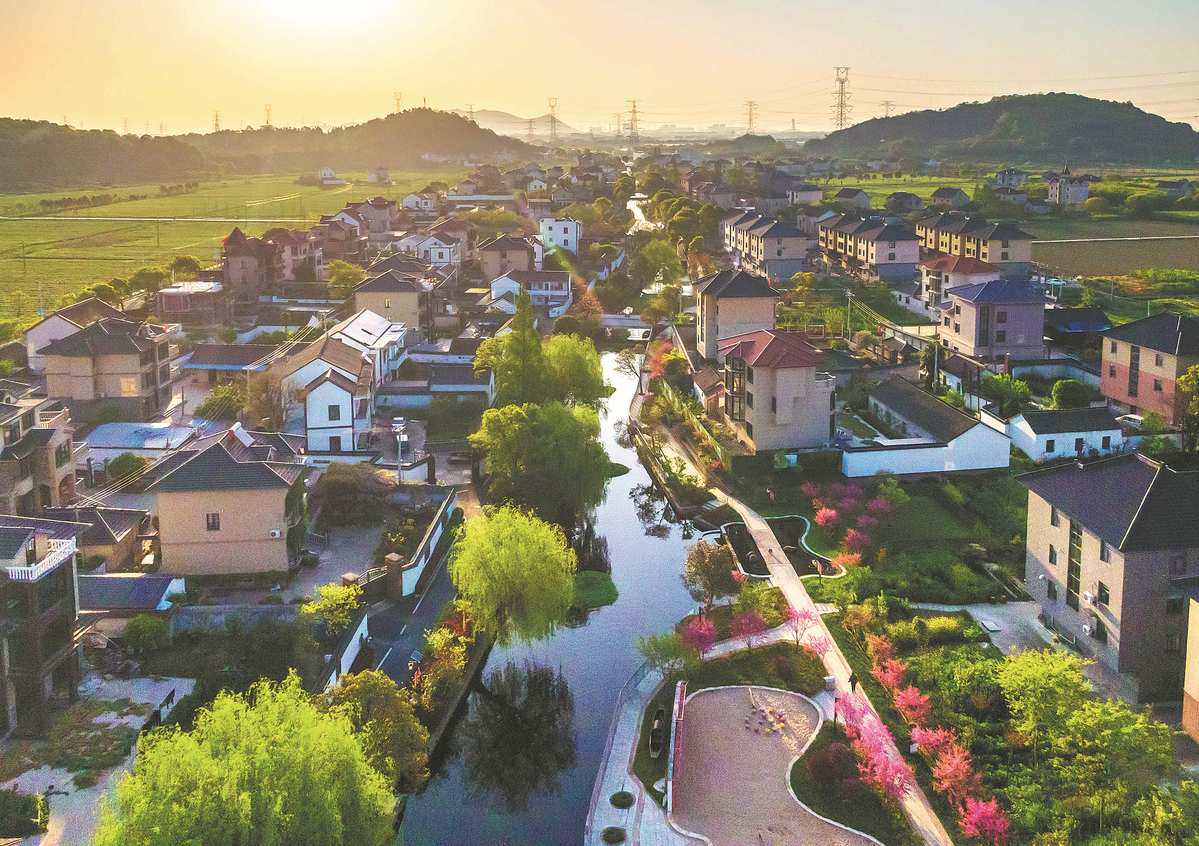 A bird's-eye view of Xueshuigang village in Jiaxing, Zhejiang province.Photo by CHINA DAILY

New projects close the gap between rural and urban development

In his book Garden Cities of Tomorrow, Ebenezer Howard, an urban planner in the United Kingdom in the 19th century, supported the idea of combining active urban living with a pleasant rural environment.

As China sets its sights on advancing rural vitalization in the 14th Five-Year Plan (2021-25) after eradicating the last traces of absolute poverty by the end of 2020, numerous villages nationwide have transformed themselves into places that Howard would have been happy to visit.

In Jiaxing, Zhejiang province, villages have prospered by exploring distinctive ways to tap their potential.

While baseball is commonly played in China, participation in the sport remains largely confined to major urban centers. However, in Xujiadai village, Zhejiang, home to some 5,000 residents, the sport is played every day.

Professional baseball players have visited Xujiadai — which forms part of Pinghu, a county-level city in Jiaxing — to compete for prizes, while local children and farmers, as well as amateur players from urban areas, play the sport for fun in the village.

Late last month Xu Hanwen, an 11-year-old from Xujiadai, completed a training session clad in a baseball strip, his white teeth contrasting with his tanned skin.

"We played baseball for about four hours a day during the summer vacation," he said.

Earlier this year, the boy and his teammates won a championship at a national youth baseball competition, and he was awarded the best hitter award.

He was the envy of his young urban counterparts when they visited Xujiadai to experience baseball, which is expanding its presence in China.

Well-equipped baseball facilities, ranging from grass fields to games rooms, have been introduced in Xujiadai.

Xu is one of many local children who have received professional coaching in the sport for the past three years, with all costs covered by the village authorities in their efforts to boost the rural area.

Liu Jianqun, a senior official in Xujiadai, which has a long history of traditional agriculture, said, "You can tell from these children's tans just how long they spend training outdoors."

When Liu took charge of development in the village in 2017, he aimed to set it on a particular course.

"I used to play baseball, and saw how popular it is in a big city such as Shanghai, which is close to us," he said.

After carrying out comprehensive research and analysis, Liu made the bold decision to develop baseball.

"Villagers accepted our ideas, and even helped us make plans," Liu said. "It was all hands on deck, and not only was the environment improved, but unity among local residents was enhanced." Baseball players make full use of well-equipped facilities that have been introduced in Xujiadai, Jiaxing.Photo by CHINA DAILY

In 2018, the village authorities spent 8 million yuan ($1.15 million) on constructing the baseball facilities. A training area of more than 24,000 square meters is available for a total of 10 local primary and middle schools.

In addition to holding physical exercise classes, professional coaches train players who are hoping some day to play baseball at international level.

In recent years, Xujiadai has hosted a dozen baseball matches, including several at national level. It has also become a national baseball training venue for teenagers.

Interest in the sport has drawn tourists to the area to try their hand at baseball and enjoy the scenic countryside.

Farm parks and homestays have been developed to better meet travelers' needs, while businesses manufacturing baseball bags, caps and related cultural items are operating in Xujiadai.

Fang Xi, who runs a private art gallery and a restaurant, said, "I was immediately drawn to the countryside and decided to settle in the village."

Hailing from downtown Pinghu, Fang first visited Xujiadai in 2019, and invited her friends to play baseball with villagers. "Baseball has been a great diversion for all of us," she said.

Fang said her restaurant often caters to more than 100 guests during weekends, when the parking lot is full.

More than 30 villagers have received dividends from shares in her business. "This business mode is great, and I feel as though I genuinely fit in with the village," Fang said.

The village authorities have launched a rural tourism company — encouraging locals to invest in this business, which has become a major source of income.

"We give low-income households the first refusal on shares," Liu said.

In recent years, the local economy has expanded annually by more than 50 percent, and the tourism company's yearly business turnover exceeds 10 million yuan. The picturesque village of Zhongdai in Jiaxing is situated about 16 kilometers northwest of Xujiadai. Birds fly over gray-tiled, white-walled properties on the banks of a meandering river, while numerous visitors enjoy fishing at a pond.

Hosted by China Central Television on Sept 3, the gala featured dancing and singing troupes, as well as 600 drones that lit up the sky above the village.

The event was a rehearsal for and a prerecording of the Chinese Farmers Harvest Festival gala, which aired nationwide on Sept 23.

Liu said: "The gala was splendid. I received many orders after the event, especially with the National Day holiday just around the corner at the time."

She has run a rural catering business for many years, with turnover ranging from 10,000 to 20,000 yuan a day during weekends and major holidays.

"Now that the village has a nice environment, visitors from Shanghai, Hangzhou (capital of Zhejiang) and Jiaxing are arriving to see what it is like," Liu said.

Zhongdai used to be one of the most economically backward areas of Jiaxing. In 2010, the village's collective income was a little over 100,000 yuan.

In 2013, the authorities in Zhongdai began eyeing an economy based on the logistics sector as the Pinghu Economic-Technological Development Zone in the neighborhood became a national-level zone.

Yang Sijun, Zhongdai's Party secretary, said properties in the village were transformed into factories. New properties were built to rent out, which over the years have produced a 10 percent return on investment.

Zhongdai has also accelerated the transfer of land use to develop modern agriculture.

Last year, the village netted more than 8 million yuan in recurring revenue — over six times the figure in 2012, according to the local authorities.

The rising income enabled more infrastructure development and provided the village with a face-lift.

A catering center launched in Zhongdai has hosted more than 60 events so far this year, earning revenue of 324,000 yuan.

More agricultural and leisure tourism products have been introduced as a result of the progress made in the village.

Over the years, many visitors to Zhongdai have headed for Cao Guijuan's handmade rice wine workshop.

Five years ago, Cao and her husband were persuaded by local officials to use their wine-making skills to open a business to attract visitors.

"We have many patrons who keep returning to taste our rice wine," Cao said.

One customer from Inner Mongolia autonomous region ordered 50 kilograms of rice wine in 2018 after tasting it in the village. Cao said that during Spring Festival last year, her business sold more than 1,000 kg of wine.

Yang said, "By constructing a beautiful village, we are also actively developing homestays, agritainment and fruit-picking tours. We want to help villagers increase their income and become wealthy by growing the local economy to achieve common prosperity."

Meanwhile, dusty days are a thing of the past in Xueshuigang village, Haiyan county, Jiaxing, about an hour's drive southwest of Zhongdai.

Chen Yuliang, a senior official in the village, said, "The hills surrounding Xueshuigang were mined one by one in pursuit of economic benefits, and the environment in the village was extremely bad."

In 2006, the local authorities closed the mines to restore vegetation damaged by the industry.

Nine projects have been launched to restore Xueshuigang's rustic charm. The village is also vigorously promoting the use of clean energy by installing photovoltaic street lamps and parking lots, along with charging posts for e-vehicles.

The vastly improved environment has attracted travelers and young entrepreneurs to Xueshuigang. Chen said, "Our village has become an online sensation, attracting an increasing number of people."

Three years ago, Shu Hualun decided to set up his business in Xueshuigang, his home village, when he heard the local authorities were planning to develop an agricultural economic development zone.

"The blueprint was very appealing to me," Shu said, adding that he made his decision after comparing local conditions with those in Shanghai and Guangzhou, capital of Guangdong province.

His company, Jiaxing Ronghe Agricultural Technology Co, specializes in organic fruit plantations, and its output value is expected to reach 8 million yuan this year, according to Shu. 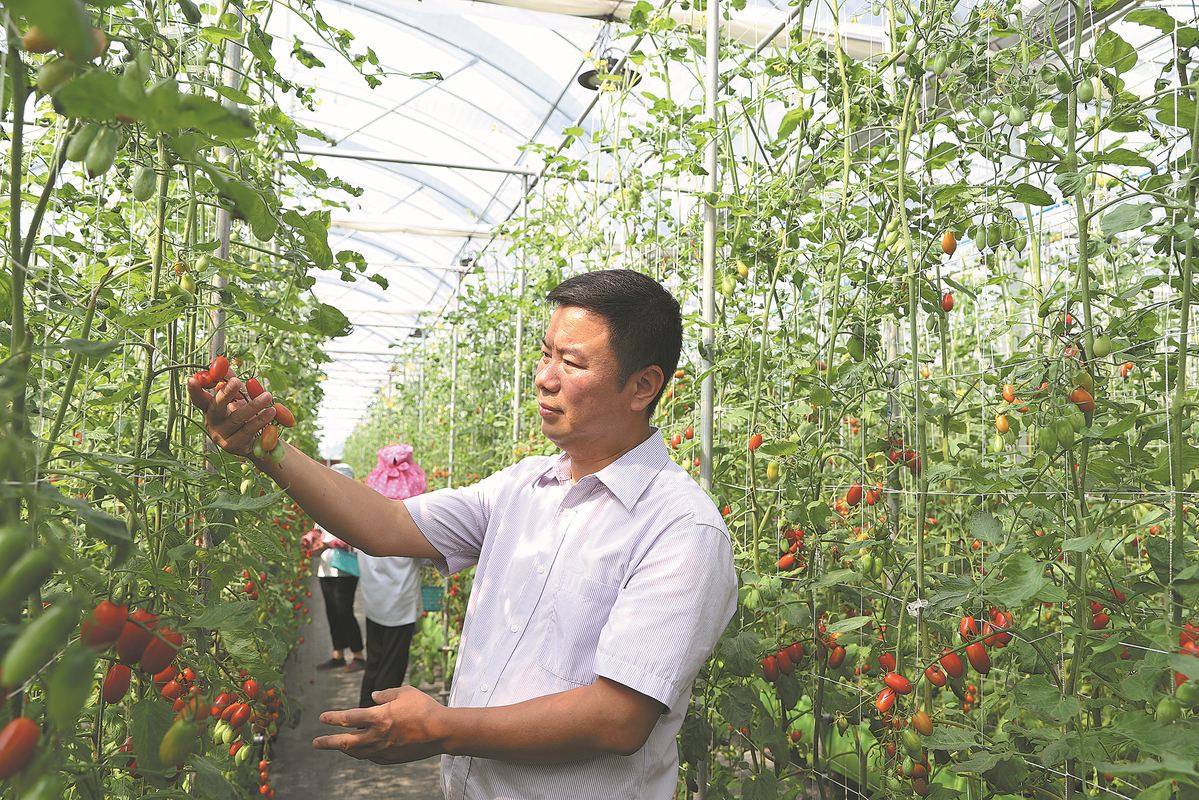 Cherry tomatoes are checked at a farm in Haiyan county, Zhejiang.Photo by CHINA DAILY

Some 10 modern and highly efficient agricultural production projects such as Shu's have been launched in Xueshuigang, creating job opportunities for more than 300 locals, including Cui Jinliang, who said, "We have been able to make money right on our doorsteps."

Cui earns 4,000 yuan a month from working at a modern farm.

Closing the gap between urban and rural development in Jiaxing has not only enriched villagers' lives but encouraged them, especially the younger generation, to set their sights high for the future.

Back in Xujiadai, Xu, the 11-year-old, looked determined when asked if he would continue his intense baseball training in the village.

"My parents have been supportive, and they play the sport in their spare time as well," he said, adding that baseball has enabled him to make friends nationwide.

"I will try my best to be selected for the national team one day," he added.