On the evening of October 17, delegates from Hunan Province to the 20th National Congress of the Communist Party of China (CPC), including Zhang Qingwei, Mao Weiming, and Zhu Guoxian, visited an exhibition themed "Forging Ahead in the New Era" at the Beijing Exhibition Hall in Beijing. 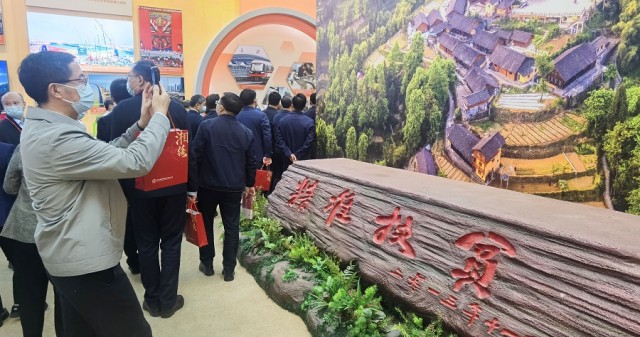 Delegates to the 20th CPC National Congress visited Hunan section of the exhibition themed "Forging Ahead in the New Era" on the evening of October 17.
Photo by Tang Jun

This exhibition is an all-round review of the great achievements and changes over the past 10 years in the cause of the Party and the country. It is divided into six parts -- the preface, central comprehensive exhibition, local exhibitions, the outlook, as well as an outdoor area and an area for interactions. Delegates followed the guide and viewed the exhibits carefully. They were deeply impressed by objects and models, videos, pictures, and touching stories. Historic achievements and shifts in the cause of the Party and the country were made possible fundamentally because General Secretary Xi Jinping has steered a steady course at the helm, and Xi Jinping Thought on Socialism with Chinese Characteristics for a New Era has provided scientific guidance.

A delegate from Hunan Province visited an exhibition themed "Forging Ahead in the New Era" on the evening of October 17.
Photo by Tang Jun

Hunan section in the exhibition area of local exhibitions is an epitome of the province's brilliant achievements in economic and social development over the past decade. It tells Hunan stories well and displays the charm of Hunan from five aspects, namely, targeted poverty alleviation, local advantages, development advantages, protecting the Yangtze River, and red or revolutionary resources.