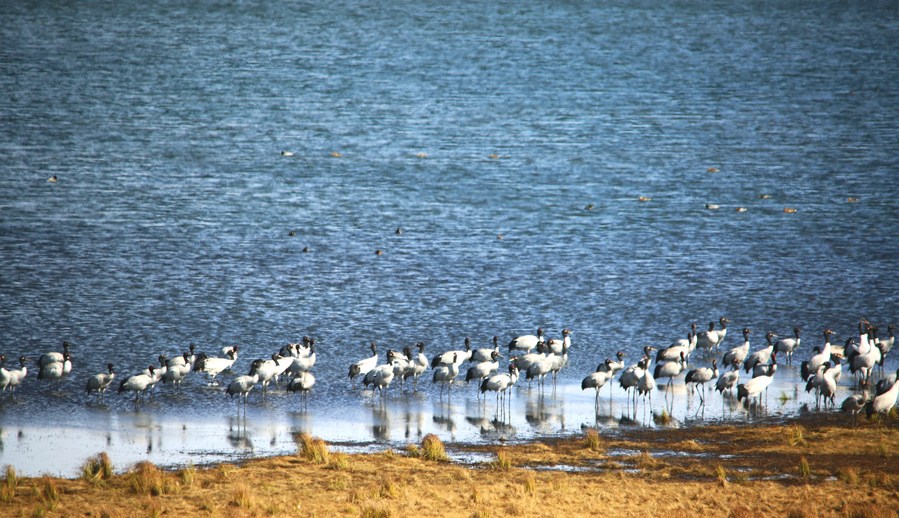 Over 100 migratory black-necked cranes, a species under first-class state protection in China, were recently spotted in a national nature reserve in Yunnan Province in the southwest of China, marking the arrival of their wintering period.

As of 7 p.m. Tuesday, more than 100 black-necked cranes, along with over ten other migratory bird species, had arrived at the Yunnan Dashanbao National Nature Reserve for Black-necked Cranes, said the reserve's administration bureau.

Compared with the number recorded last year, this year has seen an earlier arrival of the rare cranes and an increase in the number of the first batch of wintering black-necked cranes, according to the bureau.

The reserve, located in Zhaoyang District of Zhaotong City, is the most significant wintering habitat and transfer station for migratory black-necked cranes on the Yunnan-Guizhou Plateau.

Over recent years, the reserve has made a determined effort to implement conservation measures, such as wetland protection and restoration and construction of food source bases, in order to steadily improve its ecological environment for migratory birds.

During the past three years, an average of over 1,500 black-necked cranes were spotted arriving at the reserve for wintering, while the numbers of other migratory birds were also on the rise thanks to these local conservation efforts.