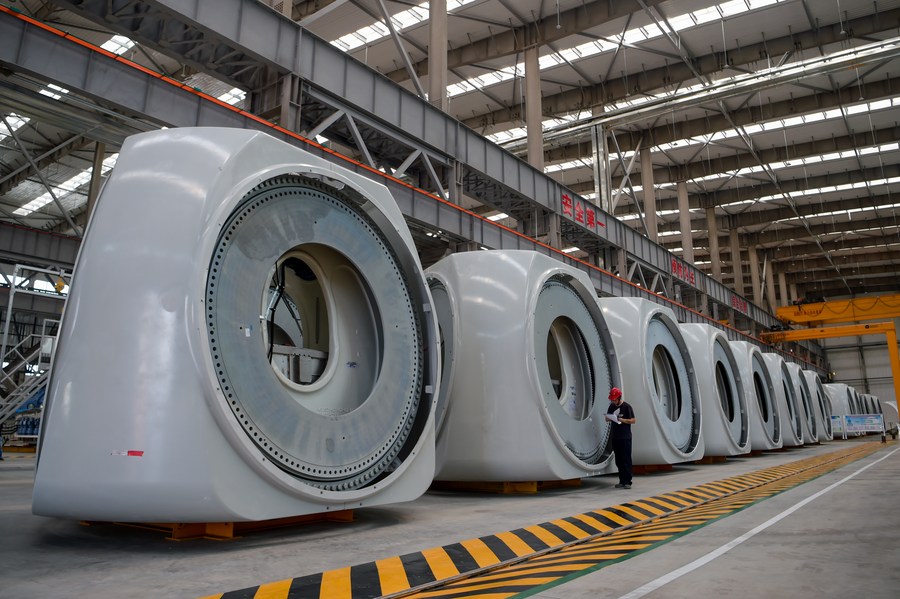 In a sleepy village in north China's Inner Mongolia Autonomous Region, solar-powered streetlights outside rows of houses switch on as the night closes in, while the local residents busily prepare their suppers using fresh vegetables grown in their yards.

This is the daily scene in Huangyangcheng Village in the city of Ulanqab, thanks to a photovoltaic power station project introduced by the local government.

The villagers were offered 144 new houses free of charge by the company that took the lead in launching a new-energy project near the village in 2015.

Among the villagers who have benefitted is Li Zhanbiao, who says the free housing has enabled locals to pursue much better lives.

"Before moving into the new house, we used to live in a 30-square-meter adobe house. In 2016, we began our brand-new life in the well-furnished house. We didn't even need to buy extra basic furniture," said Li.

The clean-energy industry values Inner Mongolia for its natural advantages. Located in the middle of the region, Ulanqab is rich in wind- and solar-power resources, and in recent years, the booming new-energy industry has become a new driving engine for the local economy.

Someone with an active role in this local boom is Liu Penghui, who runs the Dabanliang wind farm. Originating from central China's Hunan Province, Liu has been working in the city in Qahar Right Wing Middle Banner for about a year.

For Liu, the most impressive thing about Ulanqab is the strong wind that blows through it.

"The locals often quip that 'The wind blows in Ulanqab only once each year, but that lasts from spring to winter,'" Liu said.

The fierce wind has become a cash cow for the wind farm.

"Since June 2018, the Dabanliang wind farm has generated a total of 540 million kWh of electricity, sufficient volume to meet nearly four years' demand for 250,000 people, if each of them consumes 600 kWh per year," Liu said.

So far, the city has carried out 96 wind-power projects and 58 photovoltaic-power projects, bringing its total installed new-energy capacity to more than 7.65 million kilowatts, according to Meng Zeqiong, deputy director of the city's development and reform commission.

The fledgling industry has also attracted many enterprises producing relevant equipment to the city. The local industrial chain of wind-power generation alone has developed rapidly.

Chang Wei is deputy general manager of Ulanqab Windey Co., Ltd., a wind turbine manufacturer that launched its operations in the city in May. Chang is bullish on the prospects, both locally and further afield, stating that China is now closing in on the world's highest levels of wind-turbine research and development.

"In the past, the capacity of one single wind turbine was only 750 kilowatts. But now the figure for a wind turbine made in our workshop has exceeded 6,000 kilowatts," he added.

He said his company is likely to create over 500 job opportunities in the city, directly and indirectly, further boosting the benefits of clean-energy for the local population.