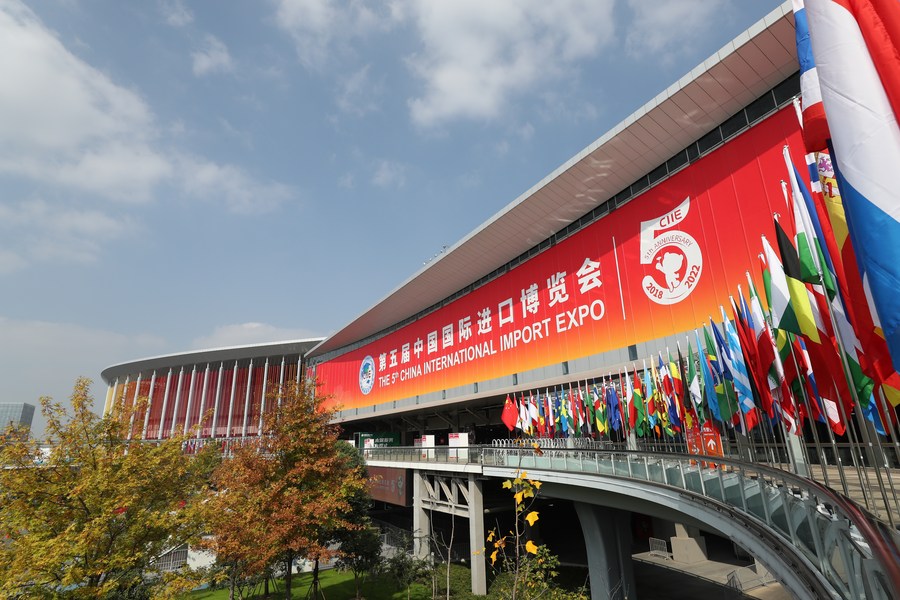 SHANGHAI, Nov. 11 (Xinhua) -- From a humanoid robot to a virtual reality mining experience, visitors were dazzled at a variety of new products, technologies, and services showcased at China's import expo, a platform for the country to share its development opportunities with the rest of the world.

The fifth China International Import Expo (CIIE), which concluded in Shanghai on Thursday, saw 73.5 billion U.S. dollars worth of tentative deals reached for one-year purchases of goods and services, up 3.9 percent from that of last year, Sun Chenghai, deputy director of the CIIE Bureau, told a news conference.

Here are six keywords of CIIE that offer a glimpse of China's market prospects and the enthusiasm of exhibitors to tap into the huge Chinese market.

Exhibits turning into merchandise, exhibitors turning into investors, first-timers turning into regular participants -- the CIIE has seen many transformations since its inauguration in 2018, reflecting China's steady advancement toward a higher-standard open economy.

"The CIIE is the perfect platform for collaboration. I think there are no other ones in the world that are able to bring so many industries and country representatives together and have this dialogue that allows us to look at opportunities," said Fabrice Megarbane, L'Oreal North Asia Zone president and chief executive officer of L'Oreal China.

Apart from promoting the free flow of goods and factors, China has stepped up its efforts in continuing institutional opening-up. The country has kept shortening the negative list for foreign investment, passed laws and regulations, including the Foreign Investment Law, and set up some pilot free trade zones (FTZ).

The fifth CIIE attracted 145 countries, regions, and international organizations, as well as more than 2,800 enterprises in the commercial exhibition area, and debuted 438 new products, technologies, and services.

What has enticed global firms to gather at the CIIE is China's vast opportunities brought about by its high-quality development drive.

During the 2013-2021 period, China's average contribution to global economic growth exceeded 30 percent, ranking first across the world, according to a report released by the National Bureau of Statistics in September.

As the first healthcare multinational to settle in the Lingang new area of the Shanghai pilot FTZ, Novo Nordisk on Nov. 6 announced its intent to invest 400 million yuan (55.63 million U.S. dollars) in establishing a holding company in the area.

Eyeing brightening future prospects, foreign enterprises are casting a vote of confidence with actions. More than 100,000 square meters of exhibition areas for the next CIIE have already been reserved.

China has held several major expos this year, including the CIIE, China International Fair for Trade in Services, and the China International Consumer Products Expo, to honor its commitments to turning the country's vast market into enormous opportunities for the world.

Afghan exhibitor Ali Azghar Faiz believed that the CIIE is a helpful platform for countries such as Afghanistan.

He said that with the help of the CIIE, he is able to not only introduce Afghan products to China, but also promote them to many other countries, and this would be a support to the Afghan people.

Since China in 2020 announced the goals of striving to peak carbon dioxide emissions by 2030 and achieve carbon neutrality by 2060, the country has aligned its strength with pro-ecology and low-carbon efforts to fast-track the pursuit of its carbon goals.

Seeing visible ecological progress, firms in various industries, including traditional energy, construction, clothing, food, and new materials, all incorporated the low-carbon vision into their products and services showcased at the expo.

A report from the French bank Societe Generale estimated that to achieve carbon neutrality by 2060, China's green investment needs to reach 2.2 trillion yuan per year in the current decade, and the amount will grow to 3.9 trillion yuan in the period from 2031 to 2060.

"China has led the world in digital management of supply chain and digital application of consumption and living styles. This is not only the foundation for China's economic resilience but also the reason why global firms are flocking to China," said Michael Bi, EY Greater China markets managing partner.

The country's digital economy reached 7.1 trillion U.S. dollars in 2021. It accounts for more than 18 percent of the amount of 47 major countries included, ranking second after the United States, said a white paper issued by the China Academy of Information and Communications Technology.

The size of China's healthcare industry is expected to reach 16 trillion yuan by 2030, according to a "Healthy China 2030" outline released by the Chinese government.

To cater to Chinese people's increasing fitness and sports demands, Decathlon, a leading global sporting goods retailer, debuted a multi-function rowing machine, which combines the features of a piece of furniture and fitness equipment.

The company believed that China's sports industry, a trillion-dollar-worth industry, will continue unleashing market dividends and opportunities, according to Bizard. ■