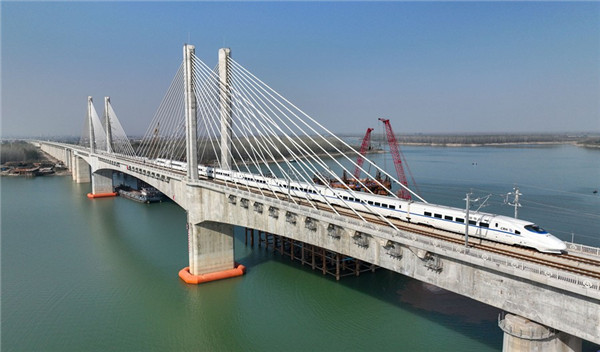 On December 14 morning, a bullet train for test run started off from the Yiyang South Station at 10:20 and arrived in Changde at 10:46. The Chonqing-Xiamen High-speed Railway Changde-Yiyang section will open to traffic in late December. Hence, the travel time between Changde and Yiyang, and Changde and Changsha, will be shortened to 30 minutes and one hour respectively. A high-speed loop line will be formed in Hunan Province.

The Chonqing-Xiamen High-speed Railway Changde-Yiyang section, 94 kilometers in length, starts from the Changde Station on the Qianjiang-Changde section. It stretches through Changde and Yiyang cities, and links the Yiyang South Station on the operating Yiyang-Changsha section. With a design speed of 350 kilometers per hour, it has Changde, Hanshou, and Yiyang South stations along the route.

Upon operation, the Chongqing-Xiamen High-speed Railway Changde-Yiyang section will join the Qiangjiang-Changde section and Zhangjiajie-Jishou-Huaihua and Shanghai-Kunming railways, to compose a high-speed rail channel. Changsha, Yiyang, Changde, Zhangjiajie, Jishou, and Huaihua will be linked to form a high-speed rail loop line of Hunan Province.

Moreover, the Changde-Yiyang section will join the Qianjiang-Changde and Yiyang-Changsha sections on the same rail line, together with the Chongqing-Qianjiang, Changsha-Ganzhou, Ganzhou-Longyan, and Longyan-Xiamen railways which are under construction or planned, to become an important high-speed rail channel linking the Sichuan-Chongqing and Hunan-Jiangxi-Fujian regions. With the railways, these regions will be more accessible and the travels of the people living along the rail lines will be greatly facilitated.