Tieguanyin, a type of oolong tea, is made in an earthenware pan. Photo provided to China Daily

Before daybreak, people in the Dongting mountain region near Taihu Lake in Suzhou, Jiangsu province, carry baskets into the mountains to pick tea leaves by lamplight.

Spring is the busiest time of year for picking the leaves and making Biluochun, a type of green tea grown organically in the area.

When the workers return with the tea leaves at midday, Shi Yuewen, 55, makes full use of his talent. Making Biluochun is a national-level intangible cultural heritage, and Shi has devoted himself to this craft for some four decades.

When he heard that traditional tea processing techniques and associated social practices in China had been added to UNESCO's Representative List of Intangible Cultural Heritage of Humanity on Nov 29, Shi felt proud and happy.

In China, there are 44 national-level intangible cultural heritage items related to tea, including the art of making Biluochun.

"This means Suzhou has been given a new world-class intangible cultural heritage identity card. As Biluochun tea grows in stature, I believe it will develop better," Shi said.

With a history of about 1,000 years, Biluochun, which translates as "green spiral spring", is made from extremely tender tea shoots. It is known for its spiral-like appearance covered in areas of white fuzz as a result of dried tea leaves. When brewing the tea, the water soon turns a vivid green, with a strong aroma and a fresh and sweet taste.

"Biluochun must be processed soon after being picked," said Shi, who often stays up late making the tea during the picking season from March 15 to April 25.

To make this tea, the trees are planted alternately with fruit trees, with intertwining branches and roots. "We inherited this practice from our ancestors, and this tea has a fruity taste and floral aroma," Shi said.

Shi places the tender tea shoots in an iron pan heated to 300 C and stirs them quickly, which is the key to making this tea. Another person usually helps him burn firewood. Shi needs to be particularly attentive, or else the leaves burn easily, while the person burning the wood must adjust the level of heat to judge the condition of the tea by smell.

Next comes the shaping process. By stirring, shaking and rubbing the tea leaves in the pan at 100 C, they begin to dry and develop a spiral form.

Shi continues to rub the leaves to dry them, and they become increasingly spiral-shaped and produce the white fuzz.

The entire process usually takes about 40 minutes. "Every minute matters, or the tea will not taste good," Shi said.

Biluochun is produced entirely by hand. As not that much of this type of tea is produced, it is expensive. For example, Shi said about 1 kilogram of leaves picked from a big tea tree, will produce only 0.1 kilogram of tea after processing.

He said he has never considered replacing manual labor with machines, as "machines cannot make this tea as good as humans".

In Ning'er county, Pu'er city, Yunnan province, when the spring tea crop is about to be picked, an auspicious sunny day is chosen to worship the god of tea. People show their gratitude to the god for providing them with the ideal weather conditions to make a living by making Pu'er, a variety of fermented tea in Yunnan.

China boasts more than 2,000 tea products, mainly divided into the following categories — green, yellow, dark, white, oolong, and black and reprocessed teas such as those with a floral scent. Although Pu'er falls under the dark tea category, debate has arisen over whether this tea should be placed in a new category, as it is different in many ways compared with dark tea.

In Ning'er, Li Xingchang, 68, is the eighth inheritor in his family making quality Pu'er tea, which was supplied to the Qing Dynasty (1644-1911) court as a tribute tea.

Tribute tea, or gong cha, was drunk by Chinese emperors, and has had a huge influence on the course of the nation's tea history.

In 2004, when the local authority began paying closer attention to Pu'er tea, it organized an investigation group to visit Li's home. His mother, Kuang Zhiying, who was more than 90, described the history and processing of tribute Pu'er to the group.

In particular, she mentioned pumpkin tribute tea, for which Pu'er tea was compressed into the shape of a pumpkin and sent to the Qing court as a tribute.

Experts from the group later found the pumpkin tribute tea now stored in the Palace Museum, China's imperial palace from 1420 to 1911, is precisely the same shape, size and weight as that described by Kuang.

In 1987, Kuang decided to spend almost all her savings on buying the management rights to part of an ancient tea garden on Kunlu Mountain, which was used to grow trees for making tribute tea for the imperial court, but later became deserted. Kuang hoped her children would protect the tea garden and inherit the craft.

Li, who had worked as a teacher at a local primary school, started managing the garden and learning to make Pu'er tea in his spare time. Several years later, he started working full-time in the trade, out of respect for his mother.

In 2008, Li became a national-level inheritor in making tribute Pu'er tea. A year later, to fulfill his promise to pass this craft on, he established a training center for local residents.

"Nine local people have since won prizes in national tea-making competitions, and a teenager won a prize in such a competition at city level," said Li, adding that more than 2,000 people have been trained to make Pu'er tea at the center and elsewhere over the years. 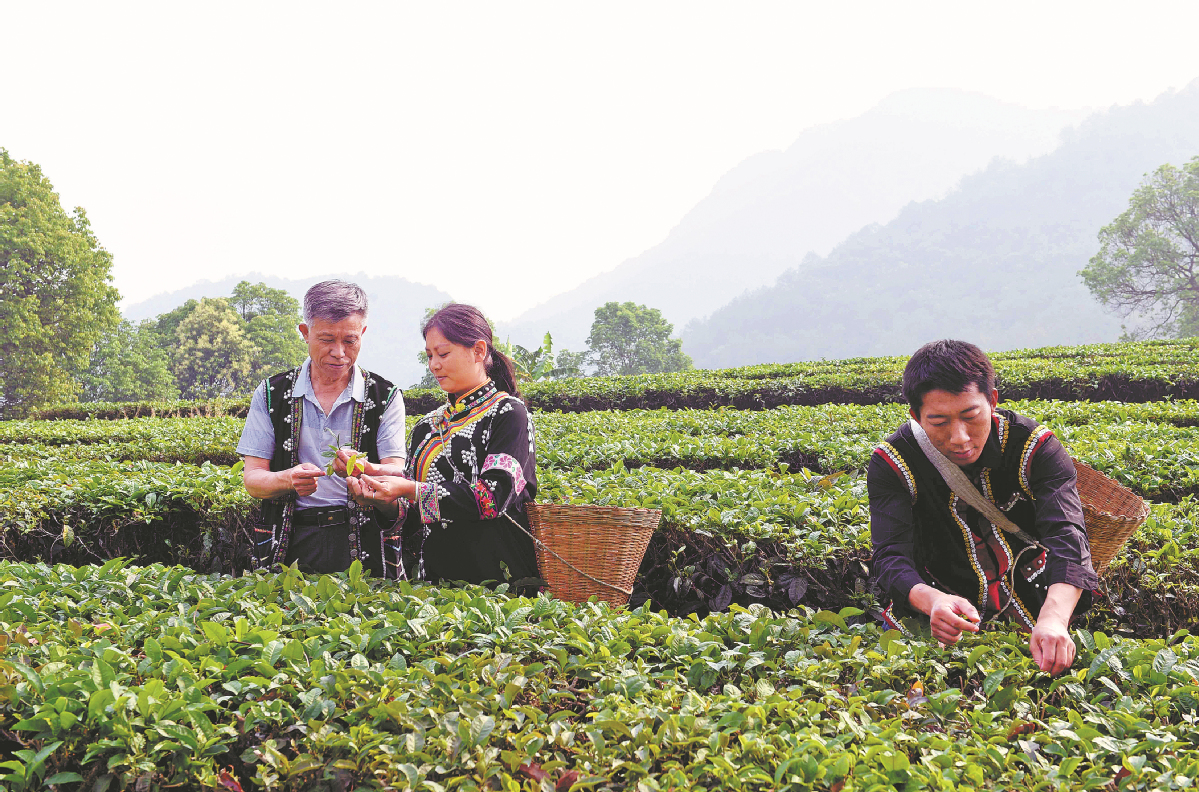 In Anxi county, Fujian province, He Huanzhu, 39, said most people in her hometown trade in Tieguanyin, a type of oolong tea originating in the county and known for its strong and lingering orchid fragrance.

In 2008, when she started helping locals sell the tea they made, she visited many tea-producing areas of China to learn more about the beverage.

In 2014, when He organized an international meeting on tea, she was surprised to find many women had worked in the industry, but their efforts had not been fully appreciated. With support from the local government, the Anxi Tieguanyin Female Tea Masters Intangible Cultural Heritage Institute was established in 2019 to highlight women's contributions and cultivate more female exponents in the craft.

The institute teaches students based on their level of ability. It helps locals with experience of tending to tea gardens and making tea to produce the drink in a standardized manner and improve their awareness of ecological protection.

For university students who lack knowledge about tea, He shows them attractive tea packages and gets them to taste the drink so they can broaden their knowledge.

Zheng Xiaofeng, 59, a local woman who has worked in tea production and sales for more than two decades in Anxi, and who teaches at the institute, said the students are keen to learn more about tea.

She highlighted the importance of the institute. "It's good for people to communicate and learn from one another, and the institute also plays an important role in spreading word on the art of making Tieguanyin tea," Zheng said.

He said the institute has taught more than 5,000 people offline, and even more students through online channels.

She said she will continue to promote women's participation in the profession. "I will encourage and spread the culture of Tieguanyin tea in Anxi to give women working in this field more confidence and to make a greater contribution to rural vitalization," He said.

Chinese started to drink tea during the Western Han Dynasty (206 BC-AD 24) — evidenced by remains of the drink unearthed from Yangling, the tomb of Emperor Liu Qi (188-141 BC).

"Before that, tea was used to make different dishes or medicine, but the Yangling discovery shows it had been drunk on its own, and people at that time had mastered tea-processing skills," Liang said.

When it came to the Tang Dynasty (618-907), The Classic of Tea was produced in the eighth century by the writer Lu Yu, who was known as the Sage of Tea. In this book, Lu illustrated the history of tea, categories of tea, the process of making the beverage, and different drinking customs.

"If we say that about 4,000 years ago, when people found tea growing wild, marks the first discovery of the beverage, then this book reflects the birth of the tea ceremony. People found that to get a good cup of tea, they had to plant the tree, pick the leaves, process and brew the drink," Liang said.

"Moreover, people realized the spiritual functions of tea. They combined drinking it with playing the guqin (a seven-stringed instrument), chess, writing calligraphy and painting, which together comprise the culture of the tea ceremony," he added.

Tea sets produced in many areas of China were found in the wreck of the Arabian dhow the Belitung, which sailed from Arabia to China around 830 AD, but sank on the return journey near Belitung island in modern-day Indonesia.

"This is about traditional culture's close connections with modern life. It perfectly complies with the description of culture in the Universal Declaration on Cultural Diversity adopted by the General Conference of UNESCO at its 31st session in 2001. The declaration states that culture is at the heart of contemporary debates about identity, social cohesion and the development of a knowledge-based economy," Sun said.