Editor's note:In the coming weeks, China Daily will be publishing special reports focusing on the ongoing development of the country's national parks system, looking at areas coming under stronger protection and the species benefiting from the new facilities.

The giant panda is undoubtedly one of the world's best-loved animals.

The cute, rotund mammal has lived in the area that is now known as China for about 8 million years, according to fossil evidence from the late Miocene period discovered in Lufeng and Yuanmou, Yunnan province.

Last year, the country announced the establishment of the Giant Panda National Park, which straddles the provinces of Sichuan, Shaanxi and Gansu. So far, the park authorities have spent more than a year exploring better ways of protecting the animal and highlighting conservation efforts.

The park, along with a related protection system, was built to counter the challenges faced by pandas, including the shrinkage and separation of natural habitats, and low rates of mating, pregnancy and cub survival. Experts have said that when the panda, one of China's flagship species, is well-protected, other species that live in the same habitat will enjoy similar benefits.

The China Conservation and Research Center for the Giant Panda said that many pandas have been loaned to 15 countries as "friendship ambassadors", and one pair made a recent trip to Qatar for the ongoing 2022 FIFA World Cup.

With its distinctive appearance — dark circles around the eyes and a plump body — the iconic black-and-white animal, often dubbed a "national treasure", fascinates people around the world.

As such, it has a high profile: it is the hero of the blockbuster movie, Kung Fu Panda, and a panda was the mascot of the 2022 Beijing Winter Olympics. The animal's image is also used as the logo of the World Wildlife Fund, a leading conservation organization. 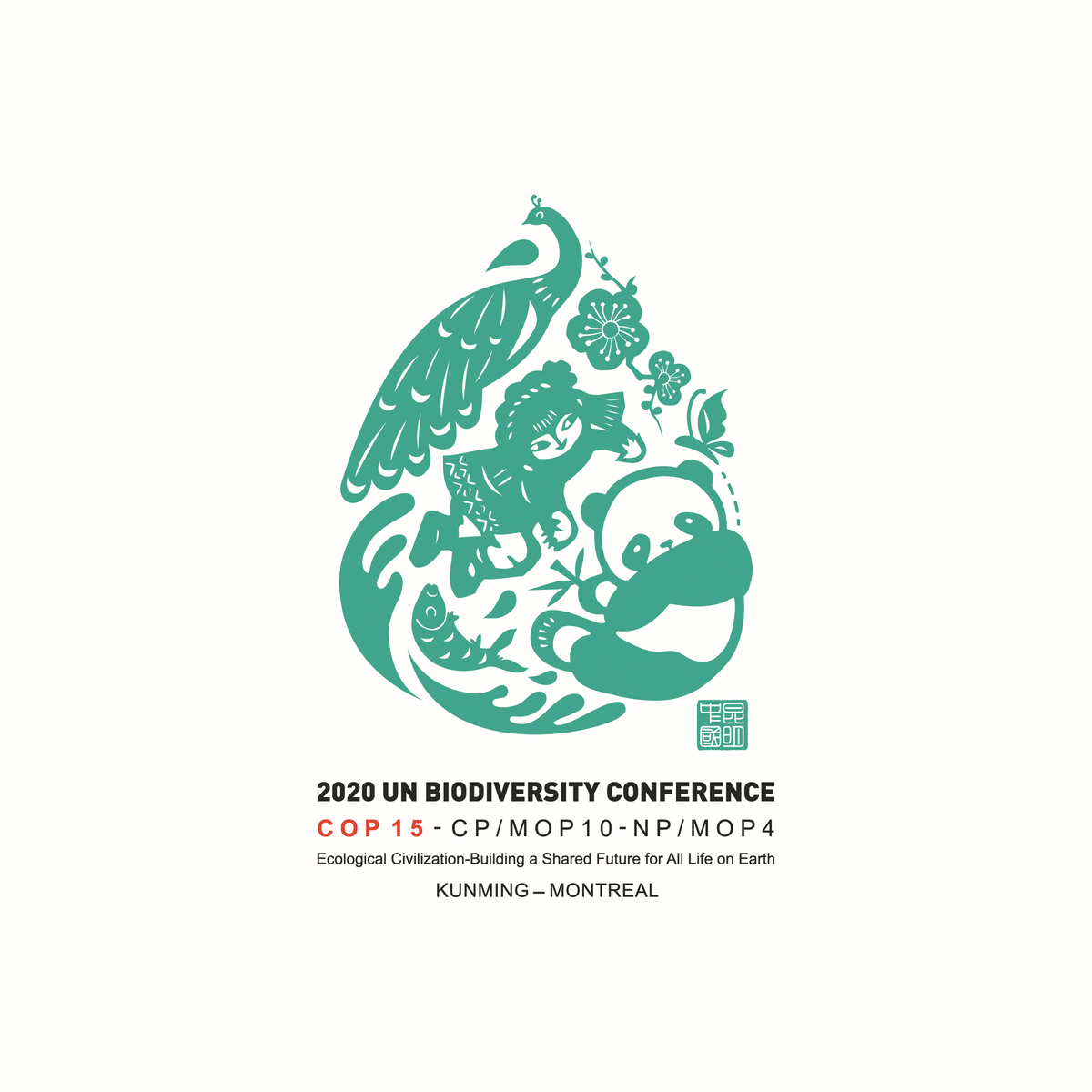 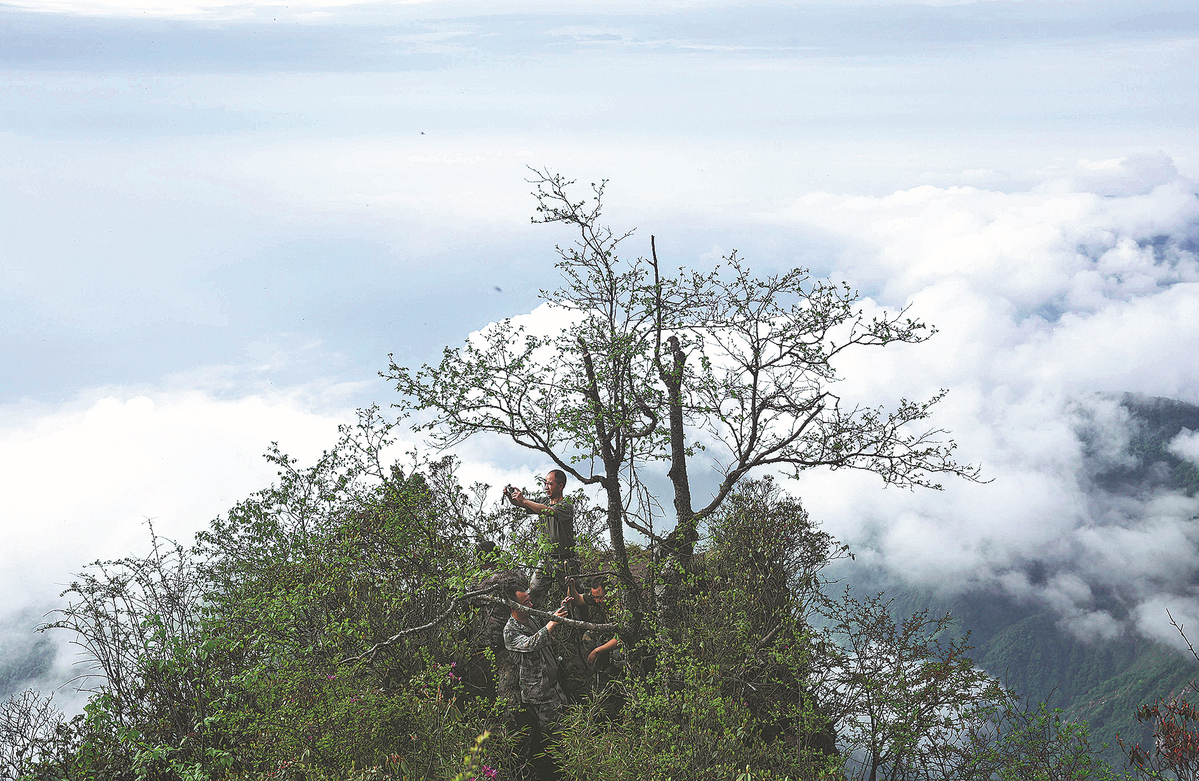 Despite being a member of the bear family, the giant panda eats bamboo, not meat, which makes it appear less aggressive and cuter to humans.

China is home to about half of the 1,600 bamboo species in the world, according to the International Network for Bamboo and Rattan, an independent intergovernmental organization.

The giant panda sports a thumb-like sixth digit on each hand, and fossil and other evidence suggest that the modern animal's ancestors may have eaten bamboo at least 6 million years ago, according to a study by scientists from the Chinese Academy of Sciences published in Scientific Reports in June.

Unlike other bears, the panda's sixth digit plays the role of an opposable thumb, which allows it to work with the other digits and hold bamboo efficiently, resulting in 99 percent of the animal's diet consisting of the plant.

However, on rare occasions, wild pandas will eat animal carcasses or other plants, according to the Shaanxi Forestry Bureau.

Bamboo is low in calories, and the panda retains the digestive system of carnivores, so it lacks the complex system found in herbivores and the bacteria they use to turn plants into nutrients. That means it is unable to absorb the maximum amount of nutrients from the large volume of bamboo it eats, according to the bureau.

As a result, pandas need to eat quickly to get sufficient nutrients from their diet, but they still spend about half their time eating and the other half sleeping.

In spring, an adult giant panda weighing 100 kilograms will spend 12 to 16 hours a day eating 10 to 18 kg of bamboo leaves and stalks, and it excretes more than 10 kg of feces every day, the bureau said. To save energy, the animal avoids excessive movement, walking at a gentle pace around a relatively small area.

"Developing a self-sustaining captive panda population aims to lay a solid foundation for the survival of artificially bred giant pandas in natural habitats and to rejuvenate small populations in the wild," said Duan Zhaogang, director of the China Conservation and Research Center for the Giant Panda. 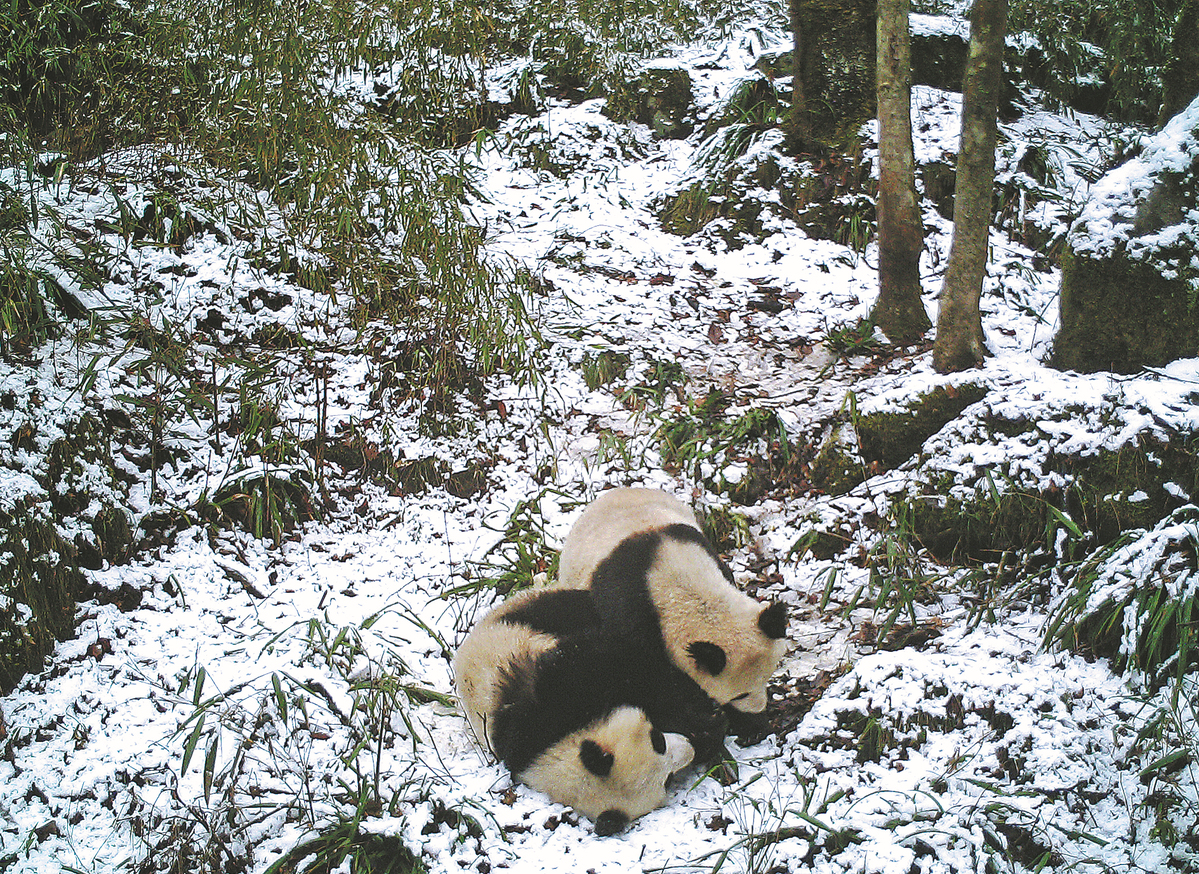 A female panda and her cub play in the snow in the Shaanxi province section of the park in 2020.
Photo by XINHUA

The size and quality of the habitat can have a major influence on the animal's life span and population size. According to the results of the fourth national survey of giant pandas in 2015, the long-term effects of climate change and human activity have seen the population divide into 33 groups that have retreated to six mountain ranges, including the Qinling in Shaanxi, the Qionglai in Sichuan and the Minshan in Gansu.

Intense human activity has led to fluctuations in the number of giant pandas. The first national giant panda survey, conducted in the 1970s, showed that there were about 2,400 in the wild. In the 1980s, the second such survey showed that the number had fallen to about 1,100.

The decline was mainly due to shrinking habitats caused by large-scale deforestation projects at the time, according to the History, Current Situation and Prospects on Nature Reserves for Giant Pandas in China, a study published in 2011 by Chinese experts. Moreover, construction of highways and high-voltage transmission lines, and the development of tourism, had split the remaining habitats into sections.

The study's authors said that if the scattered conservation areas of mountain systems could be connected, a larger network of protected areas would promote the movement of individual pandas across different regions, which would boost stability and help the population grow.

Realizing the urgent need to protect the giant panda, the central government increased the number of nature reserves in Sichuan, Shaanxi and Gansu from 15 in the 1980s to 63 in 2010, the study said.

In 2016, a Sichuan government plan for the construction of giant panda corridors said the province had identified 13 such corridor belts that were distributed across major mountains.

The corridors serve as bridges that allow pandas to move between different habitats, so activities, including animal grazing and the collection of herbs for traditional Chinese medicine, are banned within them. Local governments have also planted bamboo and erected screens to prevent outside noise from penetrating the corridors.

In 2016, the rise in the panda population prompted the International Union for Conservation of Nature to reclassify the giant panda, downgrading its status from "endangered" to "vulnerable".

Despite the rise in numbers, the survival risks facing the small population as a result of the fragmentation of habitats still make long-term protection a major challenge.

In 2017, the central government approved the pilot plan for the Giant Panda National Park. The facility was designed to unify the management of dozens of nature reserves for the panda and other species in the three provinces, which now cooperate to conduct research and devise protection policies and their enforcement.

Last year, the park was officially established. It is not only home to about 87 percent of the country's giant pandas, but also more than 8,000 wild species of flora and fauna and about 120,000 people. 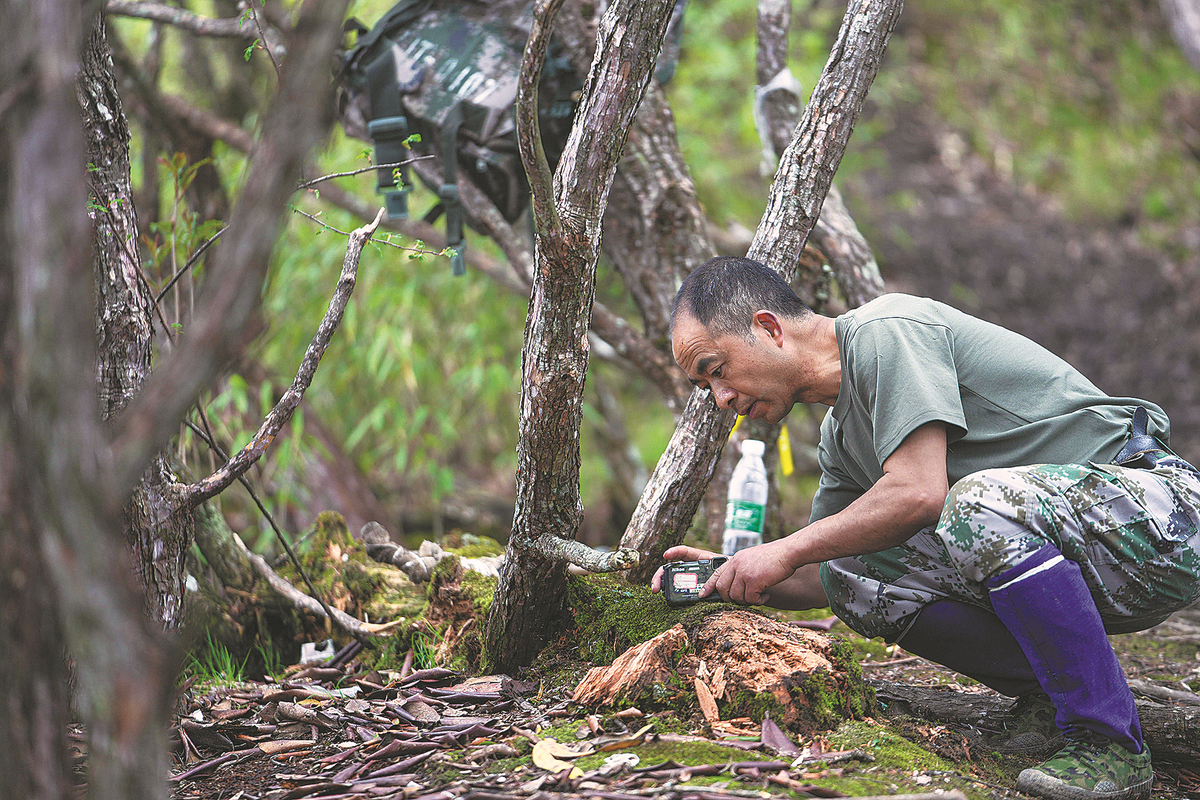 The relationship between all the inhabitants still needs to be worked out, though. For example, the Sichuan section, which accounts for about 88 percent of the park's area, has about 40,000 residents, who in recent decades lived by working on mining and hydropower projects, according to provincial government data.

Now, authorities have started closing down such projects to stop all such intensive activities. They plan to finish the work by year-end.

To earn a living, many local people have moved into areas such as selling panda-related cultural items, cultivation of agricultural specialties and the development of a franchised tourism industry.

The panda's habitat, boasting altitudes that vary by thousands of meters and various climatic zones, is also home to other rare and ancient species. They include the dove tree, which is so rare it has been dubbed the "giant panda of the plant world", the takin, the Tonkin snub-nosed monkey and the green-tailed rainbow pheasant.

In August, Zhang Jinshuo, a researcher with the Institute of Zoology at CAS, told China National Radio that protecting the giant panda means protecting its entire habitat.

"There are many creatures living with giant pandas in the habitat, including the crested ibis and forest musk deer ... these wild animals can be conserved while we protect the giant panda, which will produce an 'umbrella protection effect' because protecting the pandas will be like holding up an umbrella to shelter the other species," he said.