Innovation takes museums into the future

A staff member at Jiangmen Wuyi Museum of Overseas Chinese instructs visitors on the rules of a mystery game introduced to attract more young people to the institution. Photo by CHINA DAILY

Many people would jump at the chance to travel back in time, and now a museum in Jiangmen, Guangdong province, is giving them a chance to roll back the years.

An innovative mystery game introduced by the institution enables players to journey back to 1946 to experience the lives of overseas Chinese.

Aimed especially at the younger generation, players experience efforts by characters in the game to run businesses, and the deep affection they held for China in times of war.

To attract more visitors, Jiangmen Wuyi Museum of Overseas Chinese, which boasts a rich collection of items from Chinese living abroad, has become one of the first museums in China to combine a mystery game with exhibits.

The museum is among those in the Guangdong-Hong Kong-Macao Greater Bay Area and across the country that are working to showcase their cultural assets and tell compelling stories about their exhibits.

The mystery game is based on a historical event. Before the People's Republic of China was founded, Situ Meitang, a patriotic overseas Chinese leader born in Jiangmen, planned to return to China to engage in politics as leader of the China Zhi Gong Party, which serves the interests of Chinese living abroad.

Those taking part in the game play the roles of Situ and four fictional characters living in a Chinatown in the United States. Participants search for evidence among replica museum exhibits to choose two players — one to accompany Situ to return to China, and the other to be the next leader of Chinatown.

Young people, who have greeted the game enthusiastically, keep making phone calls to the museum to ask about it. One person even rated the game as the "coolest "must-do activity in Jiangmen.

The setting for the game is a display area at the museum that has been transformed into a US Chinatown in the last century. There is a traditional Chinese medicine pharmacy, a newspaper office, a barber shop and a tailor's business. All props, including a table lamp, clothes on a hanger, and posters on walls, are in the style of the time.

Players hunt for evidence by visiting different rooms, where they look in every corner. They read newspapers and books carefully, and check under a table to see if they have missed anything. Every box and cabinet, including the small drawers of a medicine chest, are opened and checked.

The game's success has been a big surprise for Zhang Yizhi, chief architect of the innovative project, who heads the museum's promotion and cultural and creative products development department.

She said that although the museum has been in Jiangmen for a decade, few young people used to know of its existence. "This really shocked me, and I started to wonder if our content was too inaccessible for young people," Zhang said.

Since launching the game in the summer holiday last year, the museum has organized more than 100 such activities, attracting over 500 people, mostly younger participants.

In addition to the Chinatown story, the institution has introduced another script based on a fictional murder case in Jiangmen, and is also planning to launch other interactive games.

Chen Jianxiang, 25, a lead scriptwriter in Zhang's department, said that unlike some institutions that hire professional writers to work on scripts, both stories set in the Jiangmen museum were written by its employees, who believe that only those who are familiar with the institution can come up with really intriguing plots.

He added that nearly all the staff members, from the curator to the security guard, have taken part in scriptwriting, making props, and filming for the project. To increase the stories' appeal, comics were included in the second script for the game.

The Jiangmen museum's innovative work has inspired other institutions in the area. Zhang said a museum in Dongguan launched a similar mystery game this year that featured one of its exhibitions. She added that the authorities in Dongguan and Huizhou are also investing heavily in promoting cultural relics, and she believes that more such novel and interesting attempts will continue to be made in the Greater Bay Area.

A visitor takes part in the role-playing game at the Jiangmen museum last year. Photo by CHINA DAILY

Several museums in Guangdong are using the power of technology to transform cultural relics into digital assets to be appreciated and preserved in the virtual world. By paying just 20 to 30 yuan (2.86 to $4.30), online visitors experience priceless treasures.

For example, a mobile app enables visitors to see a collection featuring a porcelain pillow from the Yuan Dynasty (1271-1368) that bears an illustration based on the classic Chinese folk story Journey to the West.

On phone screens, all characters in the illustration come "alive", reviving an iconic scene in the folk tale in which Buddhist monk Tang Sanzang rides a white horse, slowly going about his work to obtain sacred texts. His disciples, Monkey King Sun Wukong and the pig demon Zhu Bajie, lead the way, wielding their weapons to protect Tang. Another disciple, Sha Wujing, follows closely behind, holding an umbrella for Tang.

This is just one of dozens of digital collectibles launched recently by museums in Guangdong. Since April, Guangdong Museum and others in the region have released more than 20 digital artworks based on their flagship collections — issuing more than 65,000 copies, most of which sold out immediately.

Chen Shaofeng, deputy director of Guangdong Museum, said that in addition to offering a trendy and convenient way to appreciate cultural relics, digital collectibles also help form bonds between consumers and cultural relics, inspiring exploration of the stories behind these items.

Responding to concerns about data security risks, Chen said digital collectibles are mostly recreated based on cultural relics, so original data from the source asset is limited. Also, these collectibles cannot be sold on online platforms, so such risks can be controlled as long as museums remain alert to them.

Museums are now considering launching their own platforms to better manage their digital programs, in addition to collaborating with platforms operated by e-commerce giants Alibaba and Tencent, Chen said.

In July, exhibitions to mark the opening of the Hong Kong Palace Museum, or HKPM, featured dozens of new media interactive installations based on national treasures on loan from the Forbidden City in Beijing.

One installation enabled visitors to peek into the dreams of Emperor Qianlong (1711-99) during the Qing Dynasty (1644-1911). Visitors lay on a couch to see images projected as "dreams" on the ceiling, including a portrait of Qianlong's beloved queen and the poem he wrote for her after she died.

Jeffery Shaw, who designed many of the installations, said digitization enables wider access to cultural relics, adding that exciting examples of new media exhibits featuring cultural heritage are being showcased at exhibitions in museums, galleries and universities.

Burgeoning public demand and appreciation of digital cultural heritage have led to exhibitors becoming more adventurous. Shaw said that with the local authorities' commitment to art and technology, he feels that Hong Kong is fast becoming a global leader in this field.

The opening of the HKPM means that the city now has more room to diversify development of creative products themed on cultural relics. 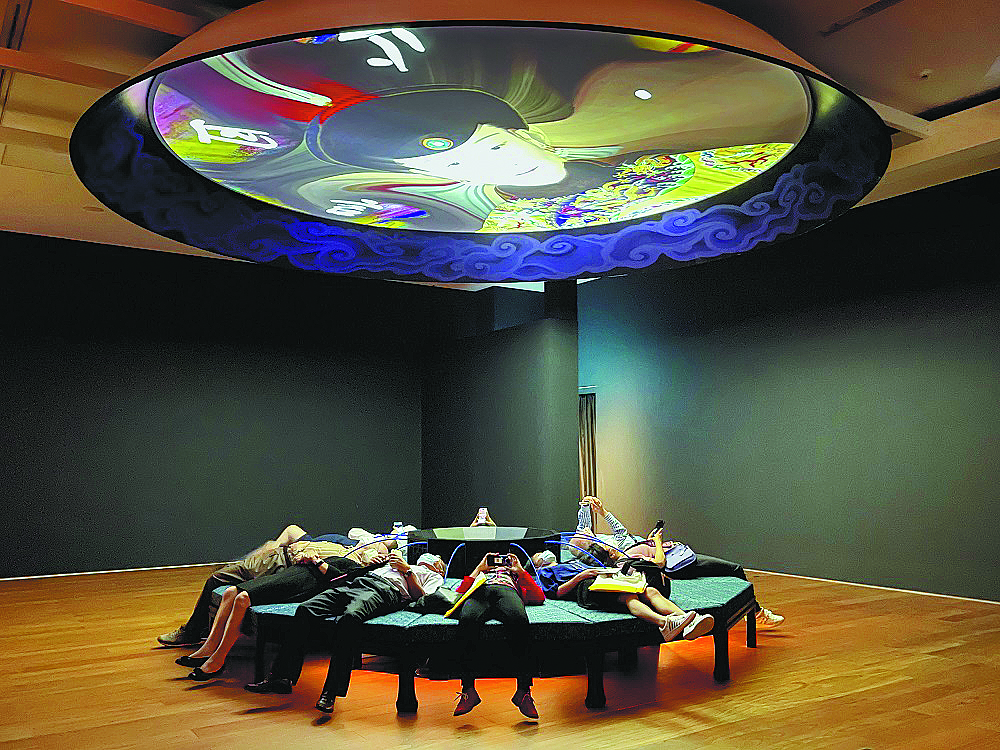 Dreamscape of the Qianlong Emperor, an installation at the Hong Kong Palace Museum, features an imagined narrative of the emperor dreaming about his deceased wife. Visitors view the work looking up from a couch. PHOTO COURTESY OF JEFFREY SHAW/HONG KONG PALACE MUSEUM

Freeman Lau Siu-hong, who is responsible for the HKPM's brand design, said the institution has a wealth of intellectual property to exploit, such as its magnificent building, spectacular national treasures on loan from Beijing, well-curated themed exhibitions, and new works created by local artists to reinterpret the Palace Museum culture.

Desmond Hui Cheuk-kuen, who heads the Department of Art and Design at Hang Seng University of Hong Kong, said the city's promotion and exploitation of local cultural relics progressed relatively slowly for a long time.

He now feels it is time for Hong Kong to adopt a more creative approach to telling the stories behind these relics, in view of the city's position as a hub for arts and cultural exchanges between China and the rest of the world. The Hong Kong Special Administrative Region's new-term government has also drawn up fresh blueprints for the cultural industry, Hui said.

Noting that the numerous innovative methods employed by mainland museums can inspire the city, he hopes Hong Kong can better tap the value of distinctive cultural exhibits to highlight the integration of Eastern and Western culture.

Hui's university is also setting its sights on new opportunities resulting from the introduction of a master's degree in cultural heritage management next year, which will also include courses to better promote the city's cultural relics. The university has had bachelor's degree studies on cultural and creative industries since 2017.

Bringing cultural relics closer to the public at national level appears to be accelerating.

The Palace Museum in Beijing has become the nation's top cultural and creative product brand — launching a television series featuring the product design ideas and behind-the-scenes stories of its cultural innovation.

In June, the Sanxingdui Ruins site in Sichuan province, in collaboration with TV stations, livestreamed its excavations for three consecutive days, attracting some 10 million views.

At Henan Museum in Zhengzhou, Henan province, blind boxes, which are bought without the customer knowing the contents, give buyers a taste of being an archaeologist. The boxes offer tools for customers to dig up replicas of the museum's relics.

Chen, from Guangdong Museum, who is also director-general of the Greater Bay Area Cultural and Creative Industry Alliance, said the area boasts a wealth of cultural relics themed on overseas trade and exchanges, Hong Kong and Macao's international experience in cultural product design, and frontier technologies from local tech giants.

Chen said he was impressed by a museum in Guangdong that used mud from the Nanhai One, an ancient shipwreck in the South China Sea, to make brush pots and tea cups as souvenirs. He encouraged museums to use more unconventional ways to promote cultural relics.

Lau, the HKPM designer, said cities in the Greater Bay Area have ambitious cultural development plans, plenty of leading design talent, and rich resources to produce cultural products. However, he said the plans drawn up by different cities in the area lack synergy.

In Beijing, in addition to the Palace Museum, intellectual property development at lesser-known cultural attractions has been coordinated via the annual Beijing Design Week. Lau hopes that in the future, cultural resources IP development in the Greater Bay Area can be planned together by institutions.

Chen said museums are not ivory towers, and the efforts they make are designed to attract more visitors to appreciate their exhibits. With museum staff members coming up with numerous innovative ideas, cultural relics are becoming increasingly accessible to the public, he added.