Since its operation in December 2021, the China-Laos Railway has brought great benefits to the Lao people and opened up a new path for Laos' development and prosperity.

As the only landlocked member of the Association of the Southeast Asian Nations (ASEAN) with mountains and plateaus that account for about 80 percent of the land area, Laos has realized its dream of becoming a land-linked hub in the region as the streamlined China-standard bullet train for the railway runs in the north of the country.

The launching of the railway marks a monumental and historic milestone in the development of modern infrastructure for Laos, said Lao President Thongloun Sisoulith at the launching ceremony on Dec. 3, 2021, calling it "a proud moment and the dream of all ethnic groups of Laos."

Marking the first anniversary of the operation of the railway, Lao Deputy Prime Minister Sonexay Siphandone hailed the quality service for passenger and freight transportation of the railway and its contribution to the socio-economic development of Laos.

The operation of the railway has greatly enhanced Laos' international strategic position, thus turning Laos into an important hub for transportation in the region, he said.

Making the logistics transportation between China and Laos fast and cost-controllable, the railway has carried a total of around 2 million tons of goods, including some 1.6 million tons of cross-border goods as of early December.

Freight transport has shown a rising trend with cargo categories expanding to more than 1,200 categories. Goods such as daily life commodities, fertilizers, electronics, photovoltaics, textiles and vegetables, among others, were shipped from China to Laos, while iron and zinc ore, cassava flour, barley rice, charcoal, rubber, potash and fruits were transported from Laos and neighboring countries to China.

Earlier this year, central China's Hunan Province and the Ministry of Agriculture and Forestry of Laos jointly signed a memorandum of understanding on cooperation between the two sides on the joint construction of the "One Way, Two Parks" project.

Under the project, the two sides will use the China-Laos Railway as a channel to comprehensively strengthen the international agricultural cooperation, and economic and trade exchanges between Hunan Province and Laos through the joint construction of a link between the modern agricultural industrial park in Lao capital Vientiane and related industrial parks in Hunan.

"We are among the beneficiaries of the railway," Xu Guowu, chairman of Xuanye (Laos) Co., Ltd. from Hunan Province told Xinhua. His company, in 2015, helped Laos officially export its first batch of rice to China, marking the start of Lao rice exportation to a new market.

On Dec. 7, Xu saw off a special freight train carrying 25 cold-chain containers loaded with his company's 500 tons of fresh Lao bananas, which departed from the Vientiane station of the railway in Lao capital to Changsha, the capital of Hunan Province.

This is the first "banana train" that travels directly to a specific Chinese city since the China-Laos Railway was put into operation a year ago. "The railway brings more businesses coming true," Xu said. 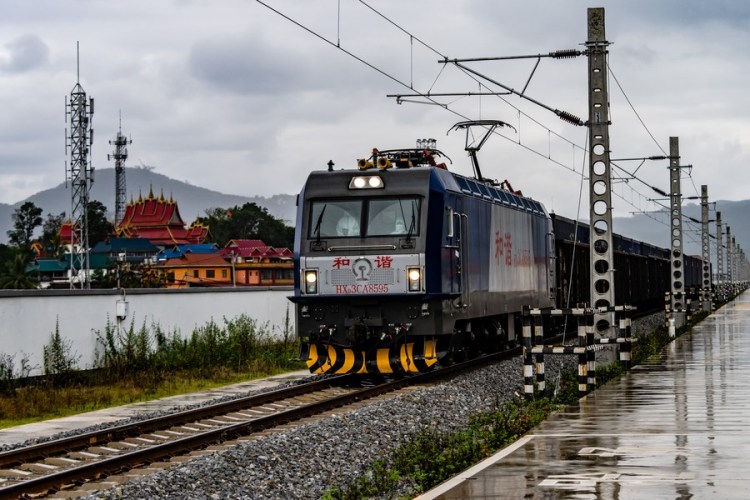 The China-Laos Railway has shortened the traveling time between cities along the route, enabling people along the line to seek education, visit families, or receive medical attention a lot faster and easier. By December, the railway has carried a total of about 1.3 million passengers.

For 32-year-old Kingkeo Duangphanam, who lives in the northern Luang Prabang province of Laos, going to the capital Vientiane in the far south of the country once meant an arduous trek of eight hours, sometimes nine, by bus.

Now it takes only two hours, by rail. Since the opening of the railway, Kingkeo has traveled from her hometown to Vientiane six times. She told Xinhua she loves the trip, as it saves time and is comfortable, not as tiring as by bus.

The railway also helped revive tourism in Laos as the demand from passengers traveling between Vientiane and the ancient capital of Luang Prabang is growing.

Du Zhigang, an operation director of the Laos-China Railway Co., Ltd. (LCRC), a joint venture based in Vientiane and responsible for the operation of the railway's Lao section, said the train tickets are in high demand because many passengers are eager to experience the high-speed EMU (electric multiple unit) train, especially those from neighboring countries like Thailand.

Thanyart Areeyat, a tour guide from Thailand told Xinhua at the Vientiane station recently that everyone is interested and excited about the China-Laos Railway.

"Curiosity about the train makes many Thai people decide to travel to the north of Laos and it will be a special experience for them to take a bullet train in Laos," said the tour guide.

"Thai tourists will also be really interested in taking a bullet train directly to China," she added.

The 28-year-old said that she was deeply impressed by the "cleanliness and smoothness" of the train running on the China-Laos Railway.

According to the Lao Ministry of Information, Culture and Tourism, in the first 10 months of 2022, 335,794 tourists, accounting for 85.27 percent of the total, arrived in Luang Prabang by train.

The China-Laos Railway, which connects Kunming in southwest China's Yunnan Province with Lao capital Vientiane, was built with the full application of Chinese management and technical standards.

The railway's Lao section has created more than 110,000 jobs for Lao people since its opening and has drawn the interest of numerous Chinese and local young talents who pursue their professional careers on the railway.

While the railway was still under construction, the Laos-China Railway Co., Ltd. had opened a training course for around 600 Lao trainees to learn train driving, scheduling and maintenance.

Vilaxay Xayluangsy, a 23-year-old man who works in the company as a train dispatcher, said he had decided to work with the railway because he thought the company could give him a stable job, and the China-Laos Railway could drive the overall development of Laos.

"I was one of the first 600 Lao trainees who have received professional railway theories and on-site practice training since 2020. Personally, it was a great opportunity to improve myself," said Vilaxay.

The LCRC held its first vocational-skill competition here in late November, aiming to improve the skills of railway employees.

"Every staff performed very well, and at the Vientiane station, one of our Lao colleagues was the champion of the passenger-service-skill competition," said Wang Shu, a Chinese specialist sent by the LCRC to Vientiane. 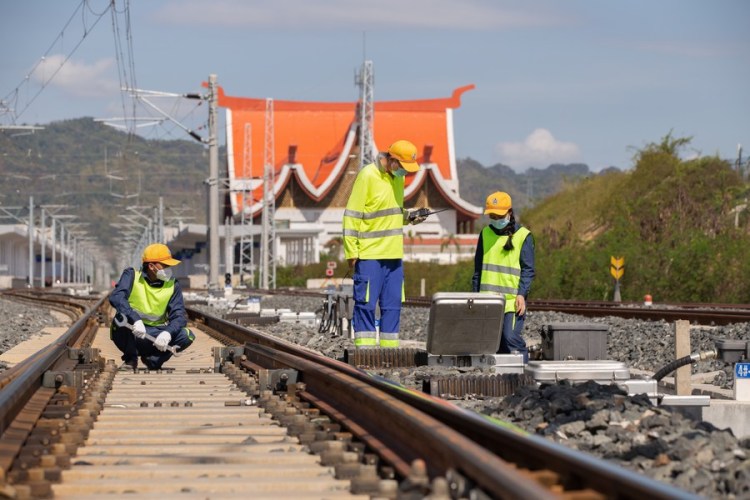 The champion is the 28-year-old Pansay Yiayengva, who works as a conductor at Vientiane station of the railway.

She has grown from a rookie to an experienced passenger duty attendant and manager with the help of her mentor, one of her Chinese colleagues.

"We were very touched and grateful to have those Chinese colleagues teaching us," she said. "Laos and China joined hands to build the railway, develop and deepen our friendship, and also developed our economy in Laos." Before entering the LCRC, Pansay spent three years studying business administration in China.

The railway will be a symbol of friendship between Laos and China and will bring happiness and prosperity to the people of both countries, Pansay said.

Sida Phengphongsawanh, a 23-year-old lady who has worked as a locomotive maintenance engineer after concluding a series of training courses, also told Xinhua in a recent interview that working and spending time together have brought her and her Chinese colleagues closer.

"Our Chinese colleagues are very kind. They patiently teach us everything we need to know to do our jobs," Sida said.