With continuously optimized anti-virus response, China's economy is shaking off the shadow of COVID-19, backed by huge potential and supportive policies.

Fresh positive signs have shown that sectors ranging from tourism to services and catering are returning to their pre-pandemic levels, indicating that an economy with 1.4 billion people is headed for a fast recovery.

China is confident of achieving an overall recovery and improvement in its economic performance in 2023, with a better foundation and more advantages shoring up growth, said Zhao Chenxin, deputy director of the National Development and Reform Commission.

Service-related consumption, which had once suffered heavy losses due to the pandemic, is among the first batch of sectors to see a revival. In Beijing, the hi-tech hub of Shenzhen and many other cities, hordes of people now crowd outside restaurants, waiting for seats during peak hours. Moviegoers swarm cinemas to watch movies on the big screen, while road and subway lines are flooded with commuters again. 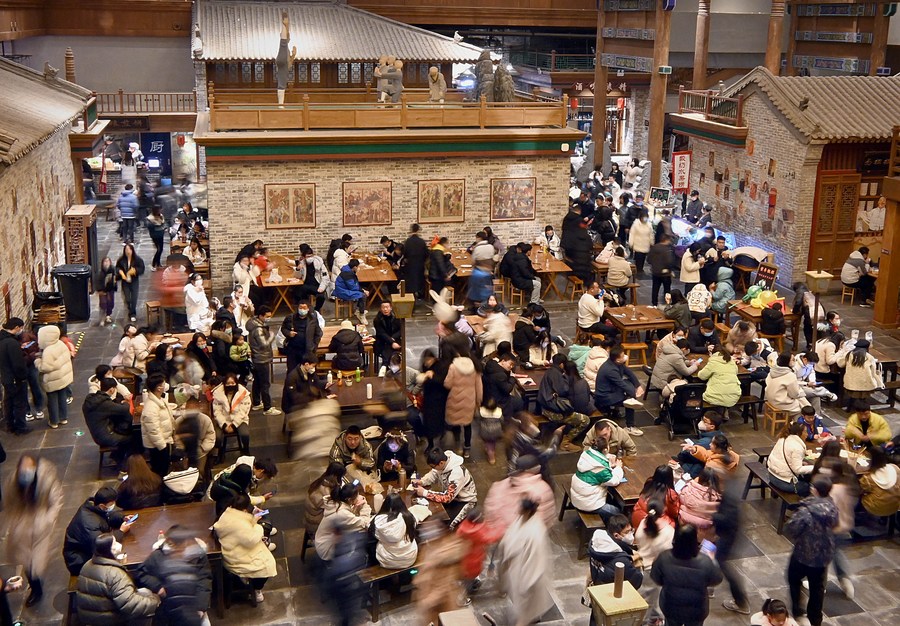 Meanwhile, easier travel rekindled Chinese people's zeal for tourism. During the three-day New Year holiday, the popular travel destination of Hainan in the south of China welcomed more than 1 million tourists and achieved a total tourism revenue of 1.5 billion yuan (about 223 million U.S. dollars). Zhangjiakou in the cold north, where snow and ice sports flourish, also welcomed an influx of tourists during the holiday, with many hotels fully booked.

Aside from the booming consumer market, headway has been made in accelerating the resumption of work and production. Major projects nationwide are kicking off construction intensively, while most factories are running at full throttle as orders pour in.

As of late December 2022, 99.5 percent of major projects in Chongqing had started construction again and factories in Hunan had set new output records since November, with confidence restored.

At a machinery company located in Jiashan County, east China's Zhejiang Province, the production lines are humming and machines are running, gearing up to satisfy increasing overseas orders.

"The year of 2023 will see recovery and a surge in orders for foreign trade companies like us," said Wang Shengshuang, chairman of the company -- expecting to reach an ambitious target of 50 percent year-on-year growth in overseas sales. 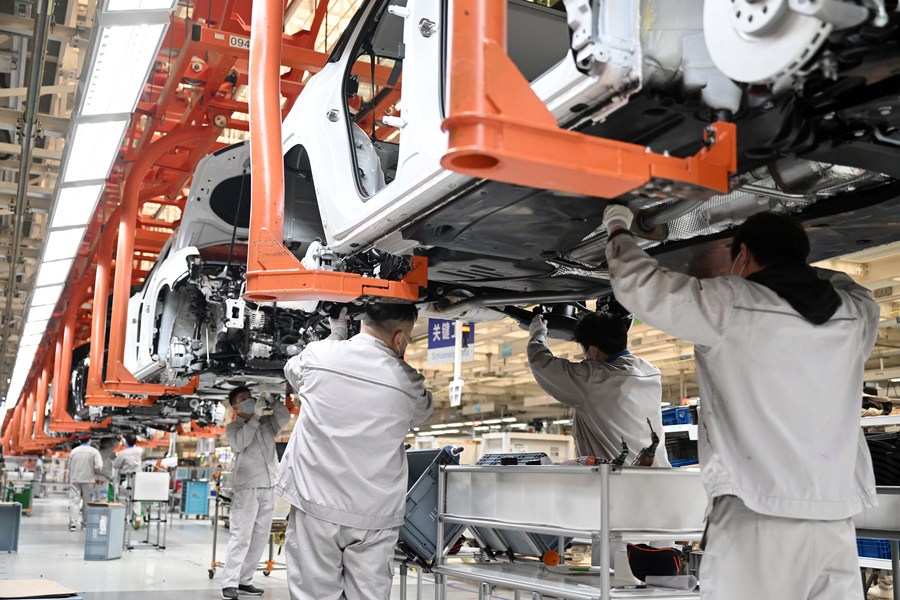 Employees work at an assembly line of the north China base of FAW-Volkswagen in north China's Tianjin, Jan. 11, 2023. (Xinhua/Zhao Zishuo)

Despite the COVID-19 disruptions, China's economic momentum continues unabated, thanks to strong policy support that helps foster vitality in investment, consumption and trade.

China has sustained an average annual economic growth rate of about 4.5 percent over the past three years -- significantly higher than the world average.

One propeller that has driven momentum is the utilization of special-purpose bonds, which are crucial in expanding effective investment. By the end of November 2022, local governments in China had issued 4 trillion yuan worth of new special-purpose bonds, offering support to nearly 30,000 key projects. In 2023, the country will appropriately expand the areas in which these bonds can be invested and used.

Early investment at the start of the year by local governments can lay a good foundation for achieving steady economic growth in the first quarter (Q1) and throughout the year, according to Zhang Yiqun, an expert from the Society of Public Finance of China.

The country will also strengthen support for consumption related to retail, catering, tourism and new energy vehicles, while expanding consumption scenarios with the help of new technologies and applications.

Local governments are on the move to encourage as much consumer spending as possible. Shenyang in northeastern China vowed to issue vouchers worth a total of 100 million yuan in Q1, covering sectors such as automobiles, home appliances, shopping malls, supermarkets and catering.

A slew of policies rolled out to stimulate consumption have evidently helped to revive the growth of the auto market. In 2022, auto sales rose 2.1 percent year on year to 26.86 million units. Sales of new energy vehicles (NEVs) almost doubled from a year earlier to about 6.89 million units.

China announced in September last year that the purchase tax exemption for NEVs would be extended to the end of 2023, which is expected to waive 100 billion yuan worth of taxes. Thanks to this, the China Association of Automobile Manufacturers has forecast that China's NEV sales for 2023 will grow 35 percent year on year to 9 million units.

This aerial photo shows vehicles waiting to be exported at a port in Lianyungang, east China's Jiangsu Province, Jan. 13, 2023. Photo by Geng Yuhe/Xinhua

Fiscal and monetary policies will continue to play a major role in cementing an overall improvement in economic operation. Wen Bin, chief economist with China Minsheng Bank, said the country will step up its fiscal policy in order to achieve greater effectiveness, while also making its prudent monetary policy more targeted and effective, possibly bringing its deficit-to-GDP ratio up to 3 percent and special bond issuance up to about 3.8 trillion yuan in 2023.

Though COVID-19 flare-ups and geopolitical conflicts have complicated the country's growth trajectory, the Chinese economy retains its huge potential and sound long-term fundamentals.

A report from Standard Chartered Bank indicated that it expected China to grow at 5.8 percent in 2023, and be an important driver of the expected global recovery.

Analysts noted that China's economy has enormous potential in areas such as industrial upgrading, new infrastructure, scientific and technological innovation, urbanization, and higher-standard opening-up, making it a strong magnet for global investors.

Though China's optimized epidemic response may disrupt economic activity in the short term, it is set to shore up growth for the year as a whole, said Han Wenxiu, executive deputy director of the office of the Central Committee for Financial and Economic Affairs, adding that the recovery will pick up pace especially in Q2, when more factories crank up production and businesses reopen.

China's growth potential was further unleashed by an orderly easing of mobility restrictions, followed by a strong release of pent-up demand for consumption and services, according to a report recently issued by the World Bank. "A quicker-than-expected recovery in the country's real estate sector is another upside possibility." The China Council for the Promotion of International Trade revealed that over 99 percent of surveyed foreign firms are confident about China's economic outlook in 2023 -- and 98.7 percent said they would maintain and expand their investment in China.

"All fundamentals are in place" in China for continued economic growth over the next 20 years, BHP Group CEO Mike Henry said, adding that China is obviously going to provide stability for global growth this year.