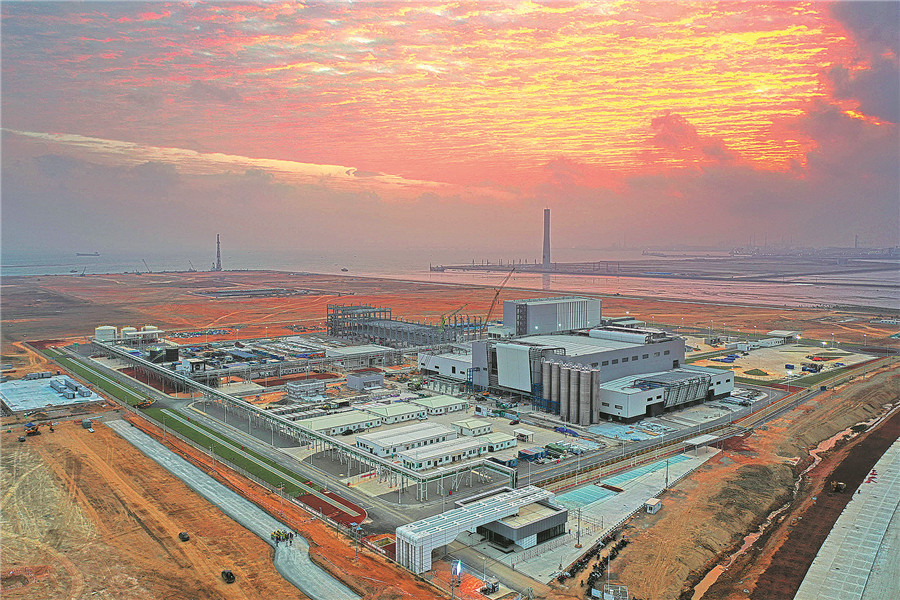 The BASF site under construction in Zhanjiang, Guangdong province, involves investment of $10 billion from the German chemical giant. [Photo/Xinhua]

China's foreign direct investment inflows are expected to hit a new record in 2023 and will probably rank first in the world, experts said on Wednesday.

This is because the country's FDI surge against headwinds last year has indicated foreign investors' strong confidence in the Chinese economy, while the government's ramped-up policy efforts are expected to boost economic recovery and expand FDI inflows into key industries, inland regions and major projects, they said.

The performance was better than expected, given the domestic and external challenges, especially the growth rate for the manufacturing industry and major foreign investment projects — those with contractual foreign investment of more than $100 million each — being 46.1 percent and 15.3 percent, respectively.

"China will become more attractive to them, with the wider opening-up and the anticipated rebound in its economic activity following optimization of the COVID-19 measures," he added.

Wei predicts FDI will grow at two digits to probably reach $220 billion to $230 billion in 2023, surpassing the United States, as the latter faces economic slowdown — and even a recession. China was the second-largest FDI recipient in 2021, behind the US, according to the United Nations Conference on Trade and Development.

In a circular released recently, the State Council said that China will support foreign-funded research and development centers, so that they can use large scientific research instruments, as well as reports and relevant data of major national science and technology programs, in accordance with Chinese laws.

Analysts have widely attributed China's robust FDI performance to the combined effects of the country's policy efforts and economic upgrade and expansion, which, they say, have largely offset disruptions from the epidemic and geopolitical issues.

As consumer activity recovers amid decreasing COVID-19 disruptions and concerted policy steps are made to prop up infrastructure investment and stabilize the property sector, China's economy is likely to see a robust rebound this year to further shore up FDI, they said.

Zhang Shaogang, vice-chairman of the China Council for the Promotion of International Trade, said, "China's new round of reform and opening-up will encourage global companies from the high-end manufacturing sector to further transform traditional industries with smart manufacturing technology in the country.

"Its industrial ecosystem and digitalization initiatives will play a crucial role in shaping the future in areas such as connected products, electric vehicles and clean power generation."

Considering that major FDI projects have high-standard industrial support system requirements, such as talent and industrial chains, Zhou Mi, a senior researcher at the Chinese Academy of International Trade and Economic Cooperation, said the FDI data last year showed that foreign investors are bullish on China's economic prospects and are placing more key links of their industrial chains in the country.

According to CCIEE vice-chairman Wei, capital, technology and talent will accelerate moving into East Asia, and China's growing, supersized domestic market — driven by its economic expansion, stabilizing property sector and increase in people's dispensable incomes — will become even more attractive to foreign investors, who nowadays tend to keep a short physical distance between product and service providers and consumers to cut costs and avoid supply chain uncertainties.

The National Development and Reform Commission said on Wednesday that China will improve implementation of its FDI policies and guide FDI into high-end manufacturing, modern services, high-tech and environmental protection industries, and central, western and northeastern regions.

It also vowed to expand, in an orderly manner, opening-up in telecommunication, internet, education, culture and healthcare industries, remove restrictions outside the negative list and ensure equal policy implementation for foreign-funded enterprises as Chinese ones.

Shen Bo, senior vice-president of Dutch semiconductor equipment manufacturer ASML and president of ASML China, said that brands that originated from China play an increasingly important role in major semiconductor markets, which ensures the long-term prospects of the semiconductor industry in the country.

ASML currently employs more than 1,500 people in the Chinese mainland, and it will continue to expand team and attract talents in China, he said.