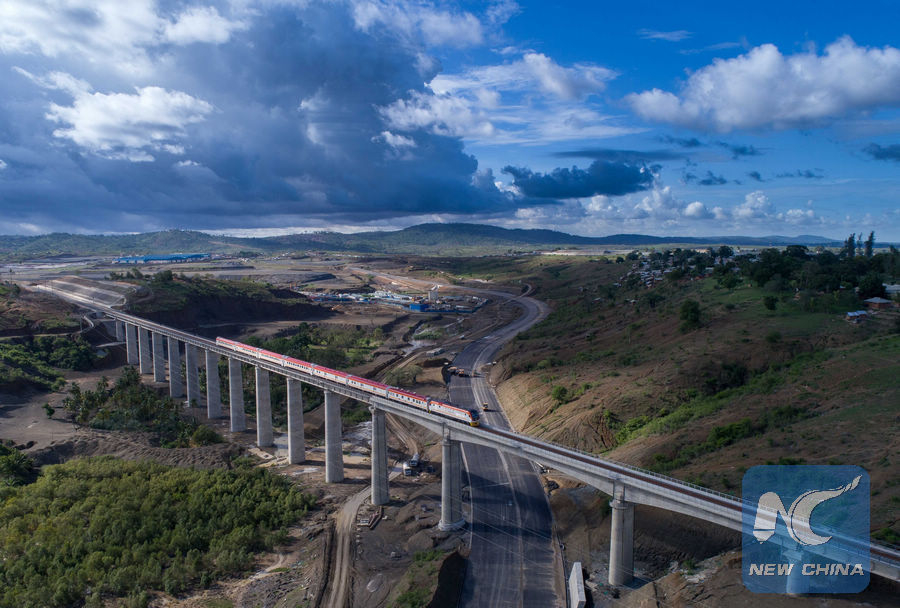 Mazeras Bridge of the Mombasa-Nairobi standard gauge railway in Kenya, May 12, 2017. [Photo/Xinhua]

Yet there has been no substantive research confirming the claim is true. Such criticisms are mostly part of the politicization of what essentially is an economic issue, especially since data show that the Belt and Road Initiative can shorten logistics time by about 2.5 percent, reduce global trade costs by 2.2 percent, and increase global real income by as high as 2.9 percent.

According to the Barro-Ricardo effect, government debt does not affect economic growth at all. And research by the International Monetary Fund shows that there is an optimal debt ratio between the GDP growth of the different countries and their governments' sovereign debt. According to this study, if debt reaches the optimal ratio, it will maximize the economic growth rate.

Economists across the world have been debating on the relationship between government debt and economic development. Yet since the Belt and Road projects are being implemented only since 2013, there is not enough data to carry out an in-depth study into the relationship between the infrastructure projects and the economic growth of the Belt and Road countries.

However, this has not stopped economists, political scientists, government officials, think tanks and the media from India, the United States, Australia and other countries to "classify" it as part of China's "debt-trap diplomacy".

For example, Indian geo-strategist Brahma Chellaney published an article in the World Press Syndicate in January 2017 in which he had used the term "debt trap" to stigmatize the Belt and Road Initiative. Scholars like Chellaney accuse China of using opaque loan conditions to provide infrastructure financing in order to gain access to these countries' military or strategic resources.

By blatantly terming this as a form of debt-trap diplomacy, the scholars portray the Belt and Road Initiative in a bad light. However, the politicians and political scientists from the above-mentioned countries and regions that politicize economic issues are not without counter-arguments.

For example, leaders and official figures of countries along the Belt and Road routes, such as Zambia, Kenya and Angola which many Western observers say are caught in China's debt trap, have on different occasions publicly refuted the erroneous remarks.

Indeed, even some prominent US scholars and think tanks have studied the data and published reports refuting the "China debt-trap theory". For example, Deborah Brautigam and Meg Rithmire, two distinguished professors of political economy at Johns Hopkins University and Harvard University, respectively, have asserted that China's "debt trap" is a myth. The scholars also said that in some countries like Montenegro, Kenya and Zambia, there is clear evidence that the Western media spread such fears without providing any evidence to support their claim.

Also, a RAND Corporation report from the US says that railway connectivity will boost the export value of countries along the Belt and Road by 2.8 percent.

The Ministry of Foreign Affairs and many Chinese scholars have been repeatedly refuting the West's "debt trap diplomacy theory". Foreign Ministry spokesman Wang Wenbin, for instance, quoted World Bank data on July 2022 to say that 49 African countries had borrowed $696 billion. But some 75 percent came from multilateral financial institutions and private financial institutions.

Our research into the Belt and Road Initiative has uncovered four interesting features.

First, ironically, politicians in countries along the Belt and Road route who hyped up the "debt trap theory" are the first ones to strengthen cooperation with China when they come to power. For instance if they happen to be in the opposition, they can gain enough public support and thus votes to oust the ruling party by leveraging China's "debt trap diplomacy theory".

What is really ironic is that once these opposition politicians come to power, they do a U-turn and seek Chinese investments because they understand the importance of boosting the national economy.

Second, a key feature of Chinese investment in Belt and Road countries is that it tends to focus on long-term mutual economic benefits. This is a natural consequence of China's political and social structures.

It is the surety that the Chinese government will honor its commitments that has earned China support and praise from the Belt and Road countries. This is very important as the period of ROII (return on infrastructure investment) tends to be very long and profits cannot be made in the short term.

No wonder Chinese investors in Belt and Road countries always pay greater attention to long-term rather than short-term economic benefits. For example, according to Indonesia's official estimates, the Jakarta-Bandung railway line in Indonesia, which could start operations from May, is built by China for a cost of about $8 billion.

But while it is likely to generate more than $23.1 billion in revenue, it will take the next 40 years to realize it, according to our research.

It is because of such infrastructure projects and deepening diplomatic ties that Sino-Indonesian trade relations will continue to deepen, bucking the global trend. Indeed, in 2021 bilateral trade reached $124.43 billion, up 58.6 percent year-on-year.

Also, China has been Indonesia's second-largest foreign investor since 2019, and has diversified its investment in fields such as electricity, mining, automobile manufacturing, emerging network industries, as well as financing.

Third, interestingly, one of the reasons why debtor countries want to borrow money from China to build or improve infrastructure is because it can help them pay their debts to Western countries.

At present, about 70 percent of the investments in Belt and Road projects are concentrated in infrastructure construction, and the rest in the fields such as the energy, health, innovative technology, and tourism sectors.

Belt and Road countries borrow money from China to improve their infrastructure, in order to develop their economy so they can repay the loans taken from Western countries and multilateral financial institutions. Improvement of infrastructure can boost the economy and increase government revenue. That's why the Joe Biden administration has launched an infrastructure plan worth more than $1.2 trillion, hoping to stimulate the United States' economic recovery.

Only by promoting economic development and thus increasing tax revenues can a government generate more funds to repay the loans it has taken from Western countries and multilateral financial institutions, boost the economy and improve people's livelihoods.

Fourth, the continuous and substantial interest rate hikes by the US Federal Reserve and the new wave of COVID-19 infections are the real challenges Belt and Road countries have to overcome to properly manage their debts. In fact, the Fed's recent aggressive interest rate hikes have caused debt crises in many Belt and Road countries with relatively high US dollar debts.

Many Belt and Road countries with significant debt risks generally have diverse creditors — from the US to European countries to Japan and from the IMF to the World Bank. China is certainly not the only creditor of countries with high debt risks.

The West must help developing countries

So instead of accusing China of forcing Belt and Road countries into a debt trap, the West should focus on how to help the debtor countries to overcome the debt challenges and strengthen consultation and cooperation among countries to provide systematic and comprehensive solutions for countries' debt resolution.

After all, the only long-term and real solution is to implement a comprehensive plan and focus on assisting these countries to hasten their economic recovery and enhance their development capabilities.

Charles Darwin famously said that the eventual survival of a species is not because it is the strongest or the smartest; it is because it is most adaptable to change. Among all the investment projects promoting the development of the Belt and Road Initiative, China's rate of interest on loans may not be the lowest and Chinese technology may not be the best in the world, but Chinese projects are certainly best suited to promote the economic development of Belt and Road countries.