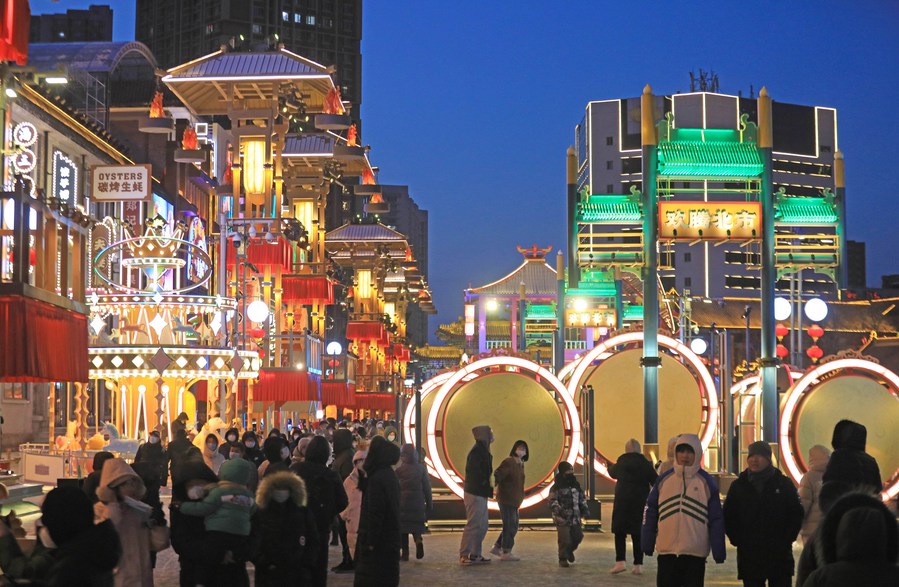 BEIJING, Jan. 24 (Xinhua) -- Following the downgrading of China's management of COVID-19, people across the country are merrily celebrating the Spring Festival, one of the most important traditional Chinese festivals, with their families.

Two weeks before the Spring Festival, Wu, with her two-year-old child, arrived at the border area in Jingxi City, Baise, after traveling by plane and car. Wu's husband is a policeman at a frontier police station. Many border areas in China had implemented more stringent COVID-19 controls.

"We no longer need to show our digital itinerary codes and worry about being quarantined," Wu said, adding that her family had not been able to spend the Spring Festival together since their child was born in June 2020.

Wu said that she plans to stay in Guangxi for a few more months to travel around, see the beautiful scenery and taste delicious local food.

"We haven't been infected with COVID-19 yet, but we have no fear of the virus since we have all been vaccinated and medicine can be bought in pharmacies at any time," she added.

As a tourism hotspot, southwest China's Chongqing Municipality, also known as the home of the hotpot, has seen a large number of tourists during the Spring Festival holiday.

For 24-year-old Guo Zhenqian, from Nanyang City in Henan Province, it is his second time spending the festival in Chongqing. To him, the experience is completely different this time.

"In 2017, we drove nearly 12 hours from Nanyang to Chongqing. However, this time we took the high-speed railway and reached Chongqing's Wanzhou District in less than three hours," said Guo.

The high-speed railway Guo took was opened in June 2022 and links Chongqing with Zhengzhou, the capital of Henan. Travel time between the two cities has been shortened from around 8 hours to 4 hours and 23 minutes at the top speed.

Thanks to the new high-speed railway line and China's optimization of COVID-19 response measures, Guo got the chance to expand his tourism roadmap which includes a ski resort in Fengdu County, a themed tourism town in Fuling District, and the Three Gorges Reservoir area.

"With such a convenient transportation method, I just want to take full advantage of it and see more scenery. And I think lots of people have the same idea as mine. The train I took was stacked with people who want to travel in Chongqing, where the mountainous scenery is so different from central China," Guo added.

Beijinger Liu Lu and her family will have a month-long vacation in Haikou, capital city of Hainan, a southern island province and a tourist hotspot.

Haikou, as well as the city of Sanya in Hainan, are among the top 10 domestic destinations for the Spring Festival holiday, according to a tourism market forecast report released in early January.

"We try to shake off the busy life in Beijing and enjoy the cosiness and relaxation here," Liu said.

Wu Lan, a tourist from northwestern Shaanxi Province, drove to Hainan with her family.

"Tourists are everywhere. We put on masks to protect ourselves wherever we go," she said, adding that she had bought many cosmetics at the duty-free shop and enjoyed the local food. ■