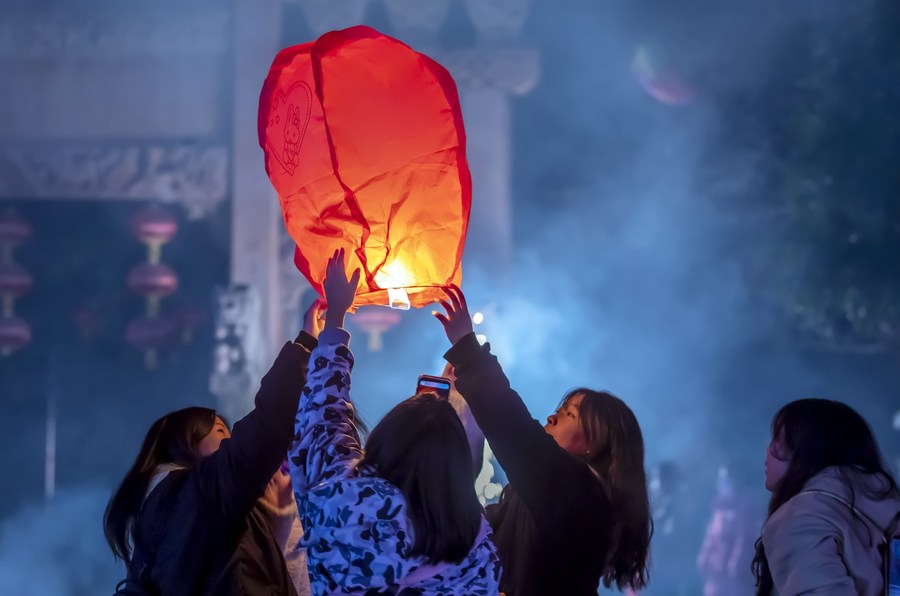 People release a sky lantern to make a wish for good fortune at a park in Qianxi, southwest China's Guizhou Province, Jan. 1, 2023.

The New Year speech of Chinese President Xi Jinping on Saturday showed China's remarkable achievements in the past year, and conveyed hope and confidence to the world, observers from around the world have said.

Looking forward to China's continued development and progress in the future, they believe that China's wisdom and solutions will continue to make new and important contributions to the cause of peace and development of mankind.

"In 2022, we successfully convened the 20th National Congress of the Communist Party of China (CPC). An ambitious blueprint has been drawn for building a modern socialist country in all respects and advancing the great rejuvenation of the Chinese nation on all fronts through a Chinese path to modernization, sounding a clarion call of the times for us forging ahead on a new journey," Xi said in the address.

"The Chinese economy has remained the second largest in the world and enjoyed sound development. GDP for the whole year is expected to exceed 120 trillion yuan," he added.

Over the past year, the Chinese people have united as one, made great achievements and injected confidence into global development. The Chinese path to modernization has provided a reference and inspiration for more countries to achieve development.

Noting Xi's New Year speech as warm, powerful, hopeful and inspiring, Ang Teck Sin, a political commentator in Singapore, said that it touched on China's remarkable achievements and once again demonstrated the firm determination to pursue a Chinese path to modernization through its own efforts, adding China has injected positive energy into promoting the healthy development of globalization.

China's key words in 2022 were "overcoming difficulties" and "making achievements," said Serik Korzhumbayev, editor-in-chief of the Delovoy Kazakhstan newspaper. After listening to Xi's New Year speech, he noted that the achievements of the Chinese people in 2022 were remarkable. Against the backdrop of COVID-19, China has optimized and adjusted its prevention and control measures in light of the time and situation, put its people first, protected their lives and health to the greatest extent, and ensured economic and social development, he said.

In the process, the Chinese people have demonstrated their fine quality of uniting in their purposes and efforts and working together with solidarity to address challenges, said Korzhumbayev.

Bambang Suryono, chairman of Indonesia's think tank Asia Innovation Study Center, said the 20th National Congress of the Communist Party of China painted a grand blueprint for building a modern socialist country in a comprehensive way, and is of great significance to unite and inspire the Chinese people to advance the great rejuvenation of the Chinese nation on all fronts through a Chinese path to modernization.

He said that the achievements of the Chinese path to modernization have brought confidence and dividends to the world, and China's development experience will continue to provide important enlightenment for others.

China's development model is based on innovation and focuses on improving people's living standards, which is very important for the world, said Christine Bierre, editor-in-chief of French newspaper New Solidarity.

China's achievements over the past year have caught the world's attention, said Yevgeny Zaitsev, head of the Center for Russian-Chinese Studies at Russia's Lomonosov Moscow State University.

China is steadily promoting development in various fields, and has become a key factor of stability in today's world, bringing confidence and hope to the international community to solve existing problems and achieve sustainable development, the expert said.

Noting that the world today is not peaceful, he pointed out that China, as a responsible major country, actively promotes the building of a human community with a shared future and injects strength into world peace and development.

Over the past few years, China has shown great confidence in all aspects, and will successfully meet challenges and continue to contribute its share to global development, the expert said.

Xi stressed in his New Year address that the Chinese economy enjoys strong resilience, tremendous potential and great vitality, and the fundamentals sustaining its long-term growth have remained strong.

As long as we stay confident and strive for progress while maintaining stability, we will realize the goals we have set, Xi added.

Over the past year, transformation and turbulence have been evolving continuously, and the tendencies toward unity and division have both been surging and contending with each other. The world economy has fallen into a slump and is in urgent need of recovery. Thus, the world expects China to continue to promote high-quality development, remain committed to building an open world economy, and keep providing new opportunities for the world through China's new development.

Tang Zhimin, director of China ASEAN Studies at the Bangkok-based Panyapiwat Institute of Management, was impressed by the statements that today's China is a country "brimming with vigor and vitality" and "a country closely linked with the world."

In the past year, whether at the Group of 20 Summit or the Asia-Pacific Economic Cooperation Economic Leaders' Meeting, Xi's important propositions have shown the world that China has always been an advocate and promoter of an open world economy, he said.

As the changes unseen in a century are accelerating, Tang said he believed that China will continue to bring opportunities for the development of countries worldwide.

From Xi's New Year address, Korzhumbayev saw new hope for the world economic recovery brought by the steady progress of China's economy while it maintains a stable performance.

China is an advocate of building a mutually beneficial and win-win open world economy, and it is believed that in the new year, China will continue to expand its opening-up with practical actions, and the steady development of China's economy will provide opportunities and momentum for the recovery and development of the world economy, said Korzhumbayev.

Looking back on the past, China's expansion of a high-level opening-up has been a continuous success, established a network of free trade zones oriented to the world characterized by high standards of efficiency and growth, and the Belt and Road Initiative has become an international public good and a platform for international cooperation, and won the support of many countries, Karim Adel, head of the Cairo-based Al Adl Center for Economic and Strategic Studies, told Xinhua.

Meanwhile, China's other initiatives, especially the Global Development Initiative and the Global Security Initiative, have won the support of many countries, Adel added, saying he expects that China will contribute more to achieving prosperity for the international community.

There is no other country like China in the world that made such an important picture of our time ahead, of our future, Volker Tschapke, honorary president of Germany's Prussian Society, told Xinhua.

He said he particularly likes Xi's statement that today's China is a country where dreams become reality, adding "that's always been like this, it is indeed like this. It will be always like this in the future!"

From Xi's New Year address, Carla Oliva, coordinator of the China and Argentina study group at the National University of Rosario in Argentina, saw hope and opportunity for the further improvement of trade between Latin America and China.

The expert said she firmly believes that a more modern China will contribute more to the world's prosperity and development.

"We cherish peace and development and value friends and partners as we have always done. We stand firm on the right side of history and on the side of human civilization and progress. We work hard to contribute China's wisdom and solutions to the cause of peace and development for all humanity," Xi said in his address.

The international community believes that China will play an important role in pooling strong synergy to promote common prosperity and progress.

Keith Bennett, a long-term China specialist and vice chair of Britain's 48 Group Club, said he was impressed by Xi's words that China will "work hard to contribute China's wisdom and solutions to the cause of peace and development for all humanity."

In this regard, China practices what it preaches, said Bennett, adding that China calls for promoting a world economic recovery through a comprehensive and inclusive globalization that leaves no people or country behind, and rejects protectionism, embargoes, and unilateral sanctions.

China can put forward proposals, mechanisms and solutions that are in the interest of all humanity, and can therefore be accepted and appreciated by all humanity, Bennett said.

Reviewing China's efforts to maintain global peace in the past year, Katarina Zakic, head of the center for the Belt and Road Initiative at the Institute of International Politics and Economics in Serbia, said changes and turbulent times in 2022 did not stop China from promoting and working on establishing better international relations that are more peaceful and full of opportunities for everyone.

She said those kinds of efforts, but not just from China, are even more needed these days than in some past times; if we had a more similar understanding of world peace and its importance, the world would be much safer.

Ismael Buchanan, a senior lecturer at the Department of Political Science at the University of Rwanda, said China remains a sincere partner for the global community to achieve economic transformation, peaceful coexistence and high-quality development of the joint construction of the Belt and Road Initiative.

"I applaud China's efforts to ensure a peaceful world with immense opportunities for everyone," said Buchanan, adding that roads designed and built by China have promoted Rwanda's trade and the China-built Masaka Hospital has provided high-quality medical services for Rwandans.

China's wisdom and solutions are a beacon for the building of a new type of international relations. The vision of building a human community with a shared future put forward by China will help build a more peaceful and better world, he said.

Thanks to the sacrifices and hard work of the Chinese people, the development and economic growth of China remain at significant and appreciable levels in all areas, said Lyazid Benhami, vice president of the Paris Association of French-Chinese Friendship.

He said that Xi, in his address, confirmed China's willingness to cooperate and open up more on the international scene as China's destiny is linked to that of the rest of the world, adding that the world also needs solutions and China's vision in various fields related to development, innovation, and peace.

John Pang, a former senior fellow at New York-based Bard College, said China has been pushing the improvement of global governance by putting forward the Belt and Road Initiative, the Global Development Initiative and the Global Security Initiative.

They are made from a generational commitment, patient and persevering, to work for a human community with a shared future, said Pang, hoping that China could continuously contribute to world peace and development with Chinese wisdom and solutions.