Fixing a leaky roof is possibly an easy job for many people, but not for 51-year-old Hao Yongming who lives in Pingyao, one of the best-preserved ancient walled cities in China and a UNESCO world heritage site.

To repair the roof leakage in his century-old houses, Hao had to complete a series of formalities. He first submitted an application to the neighborhood committee, met a team of experts from the local natural resources bureau, obtained a maintenance plan and a pass that allows building materials to enter Pingyao, and finally, he was able to hire a certified construction team for ancient architecture repair.

"The procedures are cumbersome, but they are all for preserving the original style and structure of the houses in Pingyao," said Hao. "Our future depends on preserving history." 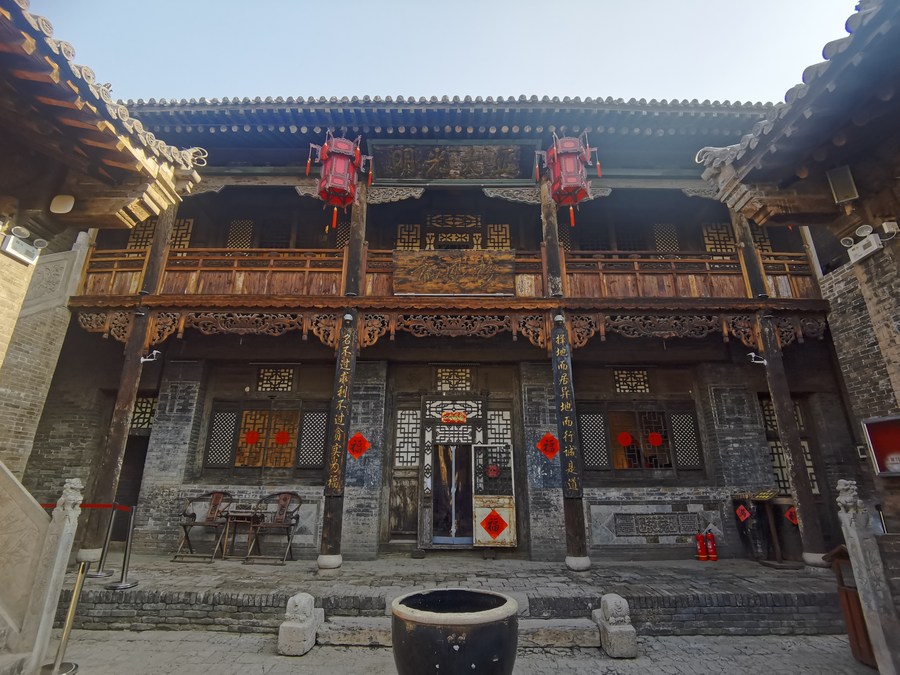 This photo shows a traditional dwelling after maintenance in the ancient city of Pingyao, north China's Shanxi Province, Dec. 28, 2021. (Photo by Zhao Yuanhao/Xinhua)

The Chinese government has initiated a string of measures for the protection of Pingyao in north China's Shanxi Province over the past decades, especially after it was named a world heritage site by UNESCO in 1997.

Thanks to the effective conservation of historic sites and intangible cultural heritage, as well as the improvement of the living environment, the walled city, with a history of over 2,800 years, is regaining its shine.

A CITY OF BREATHING HISTORY

Pingyao boasts a well-preserved urban landscape from the Ming and Qing dynasties (1368-1911). The ancient city, covering an area of 2.25 square km, is home to more than 300 cultural relics and nearly 4,000 traditional buildings.

For a period of time, Pingyao saw the development of tourism at a meteoric pace. Business opportunities brought about by tourism resulted in the transformation of traditional dwellings along the town's main drag into hostels, souvenir shops, eateries and bars.

However, many complain that the ancient city is losing its serenity and distinctive character owing to these rapid changes. 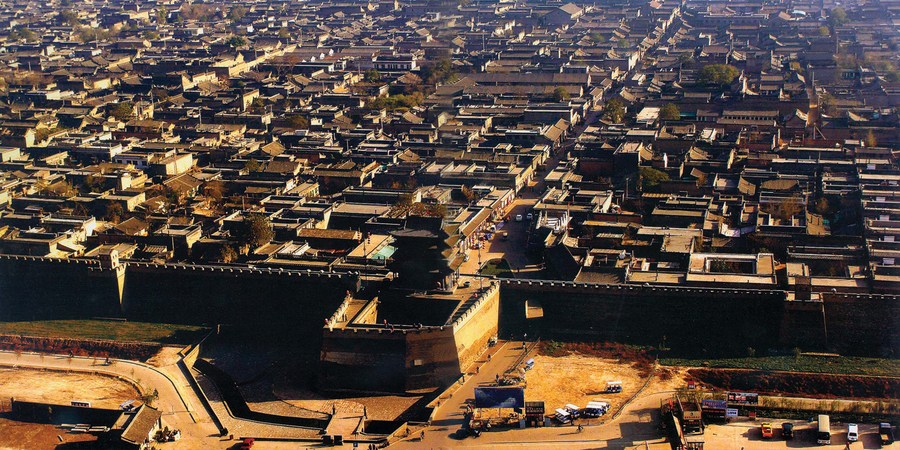 To address the problem, the local government has restricted or even prohibited projects deemed to be against the traditional characteristics of the town and encouraged the development of fine traditional Chinese culture.

It has demolished 57 illegally built courtyards and set up a database and a skill training workshop to strengthen the protection of its 137 intangible cultural heritage projects.

Shagexiren is a popular traditional art in Pingyao that blends crafts such as wood engraving, sculptures, painting, opera, calligraphy and lacquering. The intangible cultural heritage was once on the verge of extinction.

The ancient city rose to prominence in the 19th century as China's financial center. Banks flourished as Shanxi merchants expanded their businesses across the country. It has also promoted the creative transformation and development of fine traditional culture. 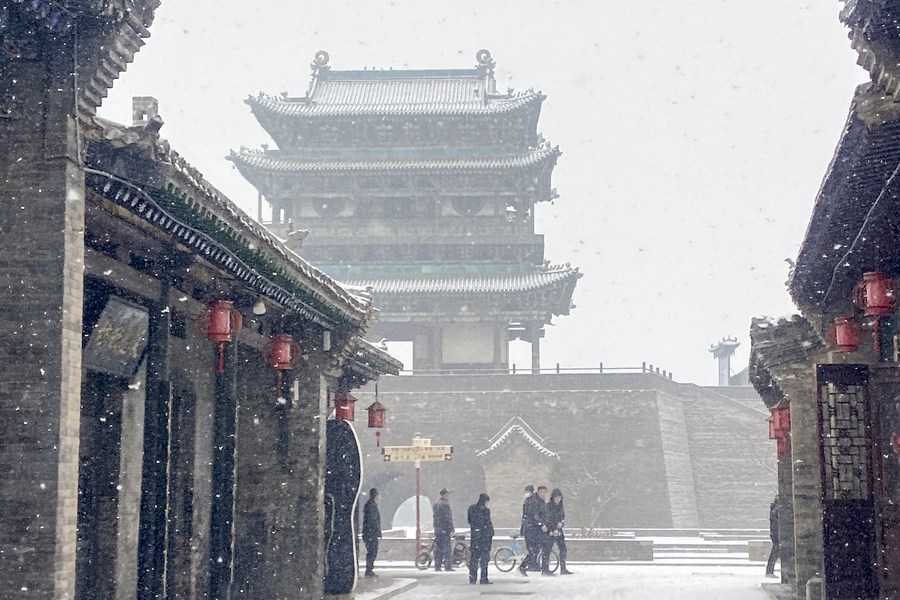 "Another Glance at Pingyao," an interactive play showcasing the business and cultural legacies left by Shanxi merchants, is deemed one of the must-see attractions in the ancient city. With over 6,000 performances to date, it has raked in more than 700 million yuan (101.5 million U.S. dollars) in revenue.

"The immersive show takes audiences back to the past, boosting the popularity of Shanxi's merchant culture," said Liu Wenlin, deputy director of Pingyao's culture and tourism bureau.

A CITY FOR PEOPLE

The ancient city is not only a heritage site but also a home to around 10,000 people. To improve local residents' living conditions, the government has built parks, a parking lot and modern public restrooms, phased out coal-fired boilers and carried out garbage sorting since 2012.

One of the largest infrastructure projects with an investment of 1.39 billion yuan is being carried out in Pingyao ancient city. It involves road reconstruction and upgrading of the electrical grid, communications network and drainage pipes. 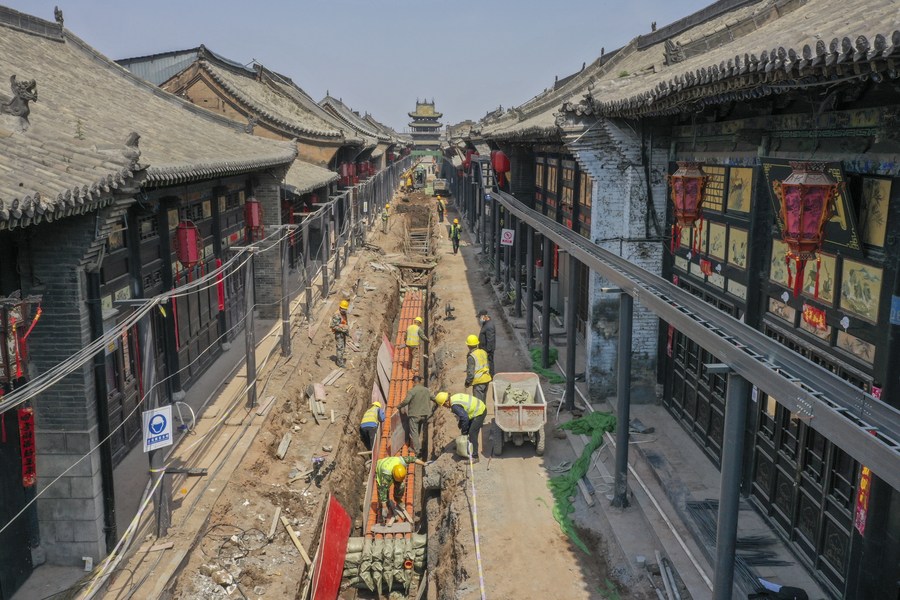 This aerial photo shows the construction site of an infrastructure project to improve the living environment in the ancient city of Pingyao, north China's Shanxi Province, April 16, 2022. (Photo by Liang Shengren/Xinhua)

"It will prevent subsurface water leakage from damaging the ancient buildings and convert more households to electricity-powered heating from coal, thus fundamentally improving the living environment of the ancient city," said Wang Longfei, deputy chief of the infrastructure project.

Since 2012, Pingyao County has provided subsidies of over 15 million yuan for the restoration of privately-owned vernacular buildings, and the initiative has helped revamp nearly 1,000 residences in 105 courtyards.

Hao has lived in Pingyao since his birth. In the past, he really hated winters as he had to keep shoveling coal into the furnace to keep warm and brave the freezing temperatures to go to a pit latrine outside his house.

Today Hao's home is equipped with an energy-efficient heater subsidized by the government and a water closet. "Living in the ancient city is now as good as in the urban apartments," he said.