"The rural flavor and landscape should be retained, and the natural environment and local culture protected," once said Chinese President Xi Jinping.

Since 2012, Xi has mentioned the word "nostalgia" several times during his visits to multiple localities across China.

Nostalgia means you will miss the place you live if you leave, Xi previously said.

Over the past years, Xi has encouraged urban and rural areas to retain their local characteristics, enabling a China that has experienced rapid development to safeguard its roots and soul, which overflow with history and shared memories.

He made remarks on the protection of Beijing's hutongs, the restoration of the historical and cultural block of Sanfangqixiang (Three Lanes and Seven Alleys) in Fuzhou city of southeast China's Fujian Province, and the planning of a historical and cultural block in Guangzhou city of south China's Guangdong Province. His sentiments meanwhile have left people from villages in the northern part of southwest China's Guizhou Province feeling quite nostalgic for their hometowns.

After a bout of morning rain, the slate floor of the courtyard house was slightly wet. In the patio, an old toon tree stretched its lush branches toward the sky.

No. 40 yard of Caochang Sitiao Hutong, Qianmen Street, Dongcheng District of Beijing, is where 75-year-old Zhu Maojin was born and raised.

The Caochang community is located southeast of Tian'anmen Square. The layout of the residential areas of the community, which have hutongs running from north to south, and quadrangle courtyards with doors on their west and east sides, has not changed since the time of the Ming and Qing dynasties (1368-1911). 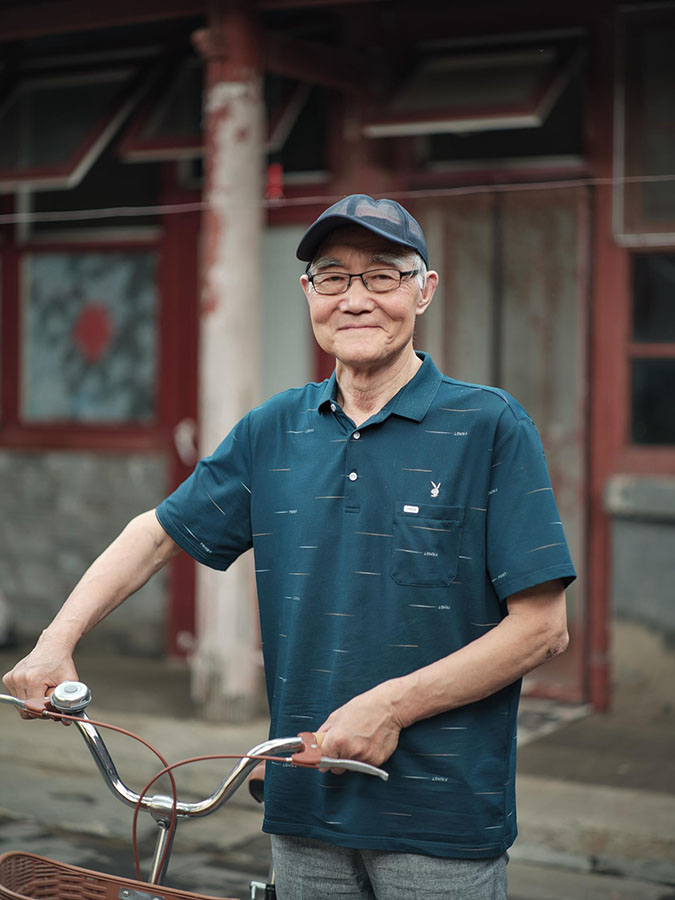 On Feb. 1, 2019, Chinese President Xi Jinping came to the Caochang Sitiao Hutong to visit its residents.

He called for both improving local residents' living conditions and protecting historical and cultural deposits, so that history and modernity will perfectly blend. He stressed specific measures to maintain the original features of hutong areas.

Today, entering Caochangsitiao Hutong, one will see courtyards built of blue bricks and black tiles, with wooden thresholds and red doors. Under the blue sky, the courtyards are neat and simple, providing a comfortable and convenient living environment for its residents. 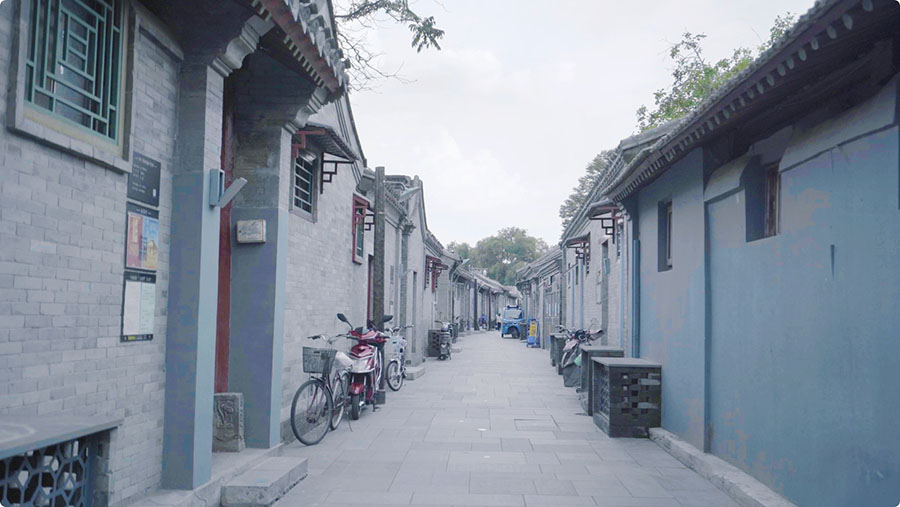 At Zhu’s home, Xi made dumplings and snacks and had cordial conversations with the three generations in Zhu's family. How much did it cost Zhu to renovate the kitchen? How much does electricity cost? These were issues Xi cared about.

Zhu said great changes have taken place in the hutong in recent years. The community had made refined improvements based on the renovation carried out in the streets and hutongs. The ground has been paved with granite and roads have been levelled; overhead wires and cables have been buried underground; flowers and grass have been planted, and street lights have been fixed, bringing a brand new look to hutongs in the community. A supermarket, a barber shop, and a shop selling staple food are just a few hundred meters away from Zhu’s home. “I can buy everything I need, from meat, vegetables, and grains to clothing and items for daily use,” said Zhu. 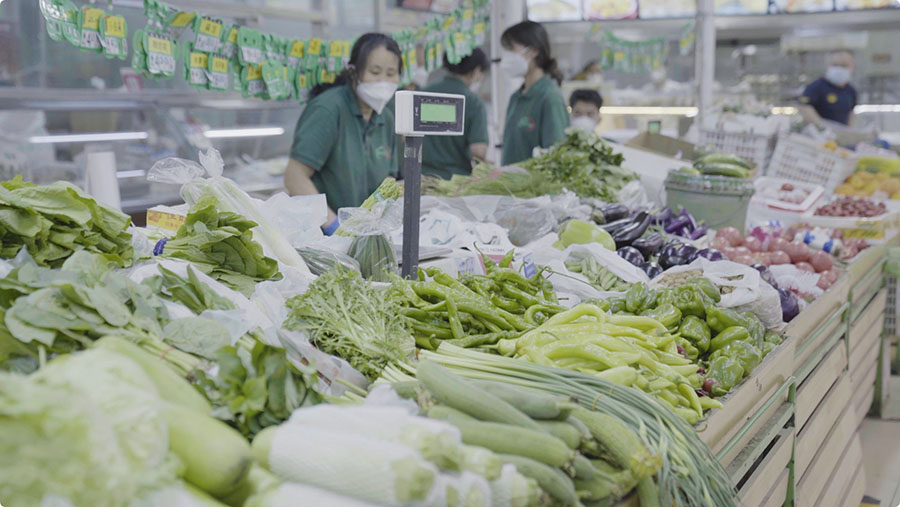 During his visit ahead of the Spring Festival in 2019, Xi walked into the small courtyard chamber for discussing public affairs next to Zhu’s house. He said that the hutongs represent the traditional cultural characteristics of Beijing. If all the hutongs in Beijing disappear and become high-rise buildings, there will be no way for people to remember nostalgia.

Under the supervision of Xi, in August 2020, the Central Committee of the Communist Party of China and the State Council approved a detailed plan for the core area of the capital city of Beijing for the 2018-2035 period. In August 2021, an action plan for urban renewal was released, clarifying the goals and direction of Beijing's urban renewal.

Today, more than 900 families like Zhu’s live in the Caochang community. The residents lead convenient, modern lives in their hometown filled with historical and cultural heritage, living harmoniously with nature, history and culture. 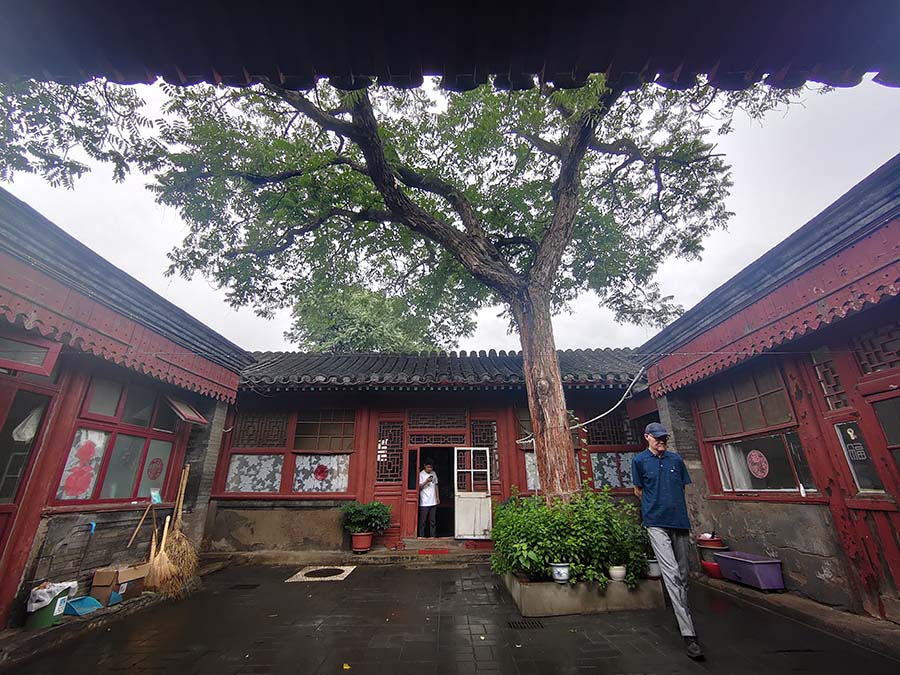 "Hutongs are close to the earth. My kaffir lily hadn’t bloomed for decades when it was in a high-rise building, but started to bloom profusely after it was moved to the courtyard,” said Zhu. He is nostalgic for the atmosphere of the hutongs, and even more nostalgic for the strong human bond between neighbors. "The hutongs in Beijing have a special humanistic atmosphere. This is a place I can never give up."

"We looked out the window together to see the village under moonlight and shadows, partly obscured by the bare branches of the plum trees. Side by side and hand in hand, we talked softly."

When he was showing tourists around the former residence of Lin Juemin, a renowned revolutionary hero in China, while reading these lines from Lin's "A Letter of Farewell to My Wife," Chen Yongjian, a volunteer guide at Sanfangqixiang (Three Lanes and Seven Alleys), an ancient city block in downtown Fuzhou, capital of southeast China's Fujian Province, would always feel touched by the story of Lin and his wife, with his eyes often filling up with tears upon repeating the loving husband’s tender words. 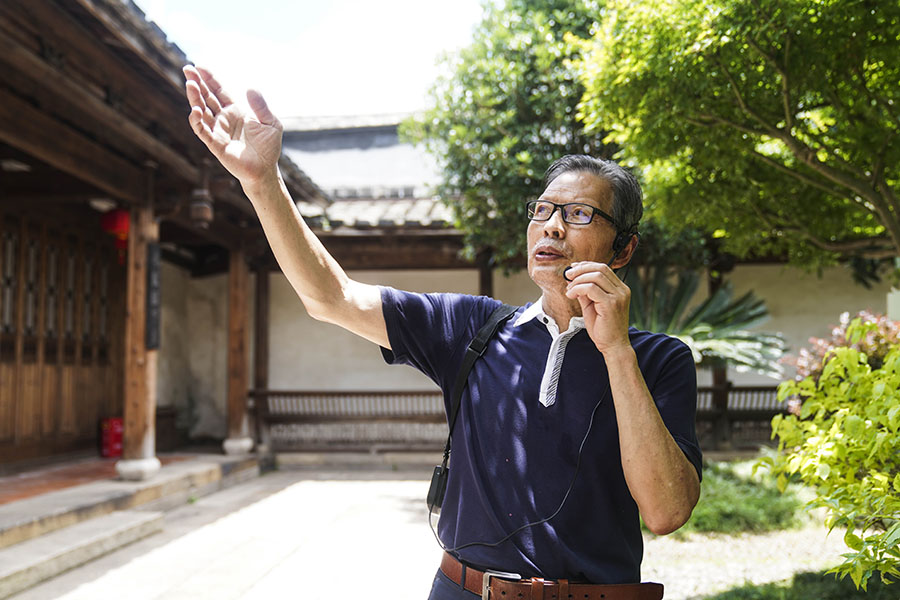 Sanfangqixiang is an ancient urban neighborhood that took on a fishbone-like layout. It came into being in the Jin Dynasty (266-420) and entered a period of prosperity during the Ming Dynasty (1368-1644) and Qing Dynasty (1644-1911). Sanfangqixiang is home to the former residences of many famous individuals in Chinese history, including Lin Zexu, Yan Fu, Shen Baozhen, Lin Juemin and Bing Xin. 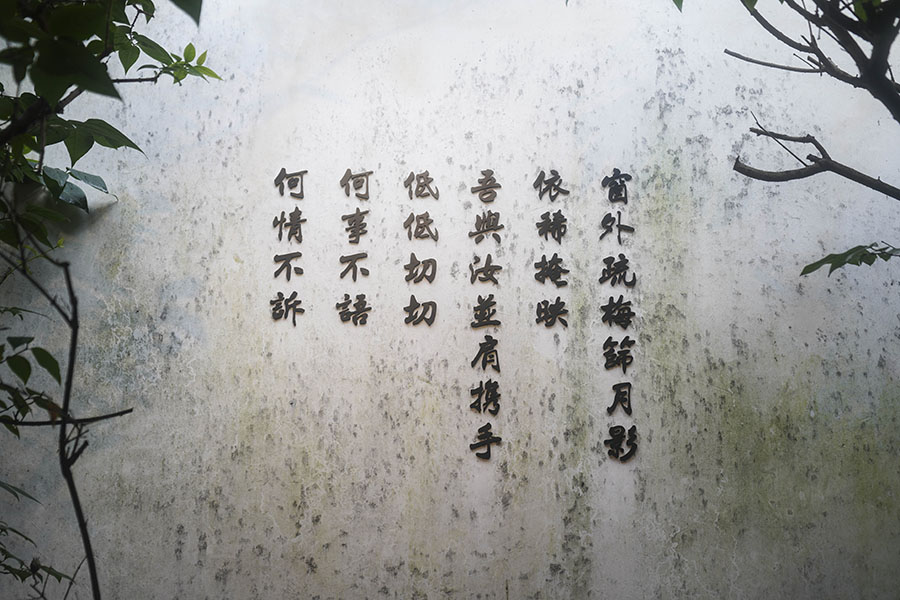 However, due to a lack of proper maintenance and protection, the urban block had previously fallen into a state of disrepair and disuse, remaining in a poor condition despite retaining its historical value. In the 1980s, Sanfangqixiang was slated to be razed to the ground to give way to a new development project.

It was at this crucial moment when a meeting on the protection of cultural relics was held at the former residence of Lin, which was presided over by Xi Jinping, who at that time was serving as the secretary of the Communist Party of China (CPC) Fuzhou Municipal Committee.

"We must protect, repair, and make good use of the city's cultural relics in our hands. Not only should we prevent them from being damaged, but also help them flourish and pass them on to future generations," Xi said at the meeting.

After the meeting, the restoration of Lin's residence was kicked off and eventually completed, with other historical buildings at Sanfangqixiang having also been put under sound protection. 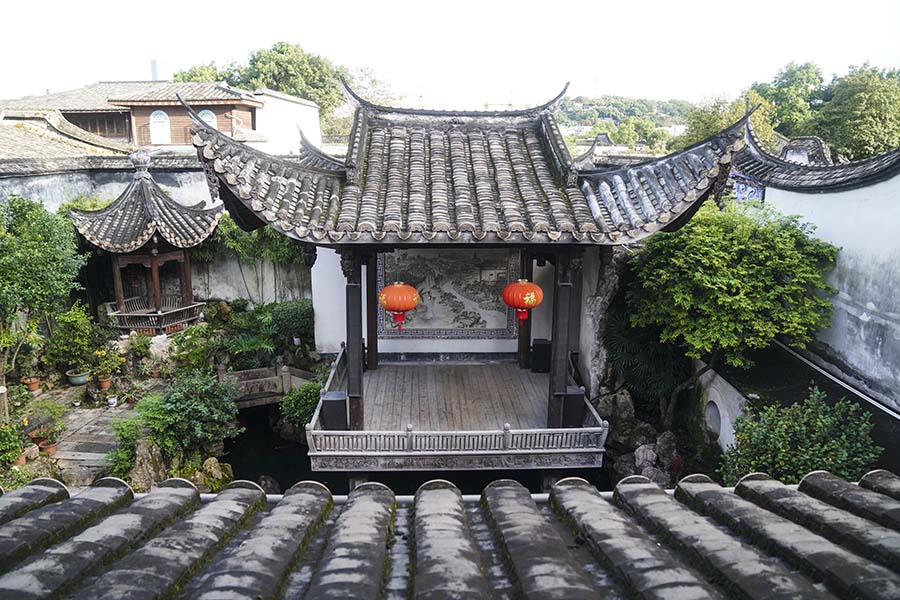 On March 24, 2021, Xi, now serving in the role of China’s president and general secretary of the CPC Central Committee, re-visited the historical and cultural block of Sanfangqixiang.

During his visit, Xi stressed that the protection of historical blocks, ancient architecture and cultural relics is equivalent to the preservation of the city's history and heritage.

So far, a total of about 5 billion yuan ($728.5 million) has been allocated to protect and restore Sanfangqixiang, with around 260,000 square meters of ancient residential buildings having been renovated, while their original appearances have remained unchanged.

Chen's family has lived in Sanfangqixiang for generations. The historical heritage at the door of the house has been preserved, the streets are now cleaner, and the quality of life has become much more convenient. Chen felt that he should do something for his hometown. 10 years ago, he became a volunteer guide here.

For Chen, Sanfangqixiang, situated in the heart of a bustling modern city, not only embodies the culture and folk customs of Fujian, but is also a place full of life thanks to the local residents who still live there. 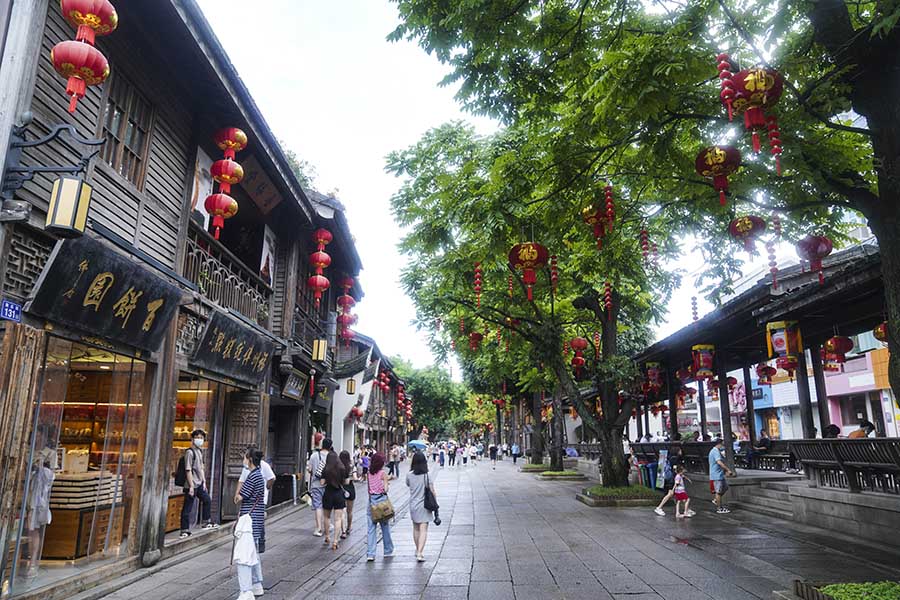 "Everything here makes me feel a sense of nostalgia for my hometown. When I showed tourists around Sanfangqixiang, I told them which tree I had climbed and what games I had played with my friends when I was a child," said Chen. "If this place is full of high buildings, there will be no means for conveying my memories," he explained.

During his visit to the small village located in Fengxiang township of Zunyi city on June 16, 2015, President Xi said "No wonder so many people come here. Their homesickness is relieved here." 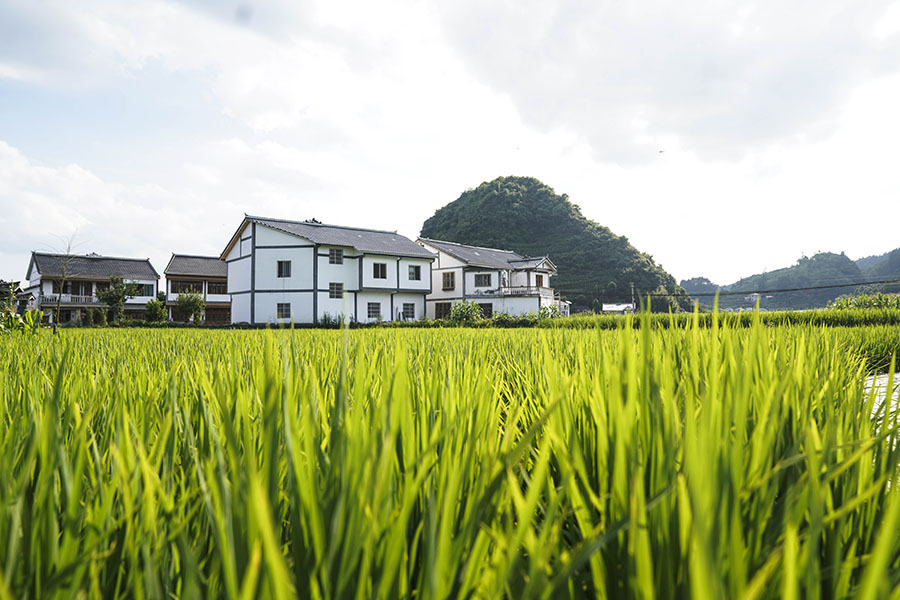 Xi’s words made Zhang Shengdi, a local entrepreneur who previously left the village for work, feel quite nostalgic for her hometown. She finally decided to go back to do something for her fellow villagers.

In 2016, Zhang started a papermaking workshop called Huamao Renjia, which literally means "Households of Huamao," to revive a kind of traditional papermaking technique that involves boiling the bark of mulberry trees, one of the traditional handicrafts found in Huamao village. The production of paper using this ancient technique includes more than 70 steps and takes 49 days for the final product to be fully prepared. 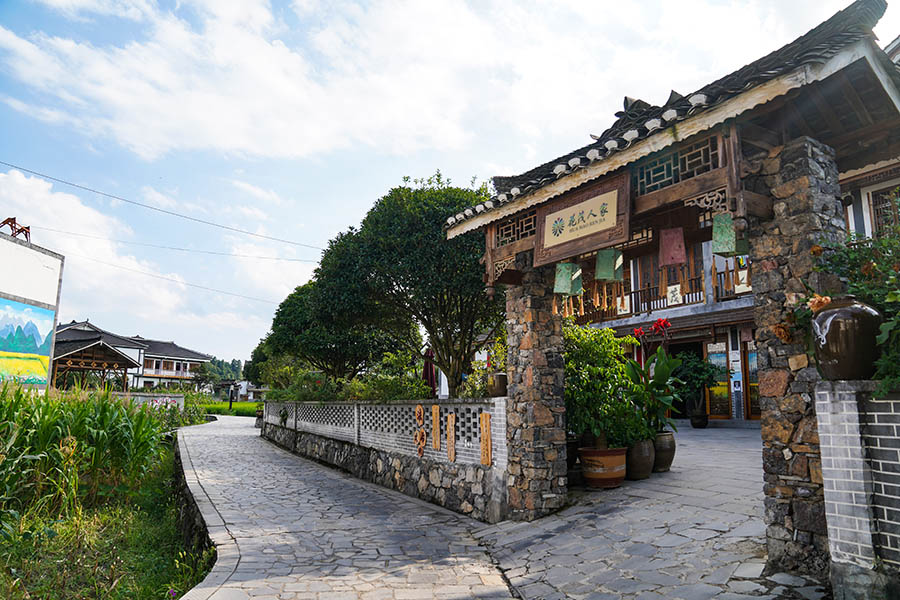 Zhang has injected new vitality into the ancient craft by introducing papermaking artwork made with flowers and leaves while diversifying the products made using paper, including fans, bookmarks, and notebooks, which have been well received by tourists.

“The new rural construction should conform to the reality and law of development in rural areas. The rural flavor and landscape should be retained, and the natural environment and local culture protected,” Xi said.

For Zhang, the lush mountains and lucid waters in her hometown have provided her with a sense of comfort and security. It's like "a baby nestling in her mother's arms," she said.

Formerly known as "Huangmaotian," which literally means a desolate and barren place, Huamao used to be a village that faced difficulties in developing agriculture and ensuring stable employment. It also suffered from poor transportation. The village had more than 4,000 villagers, but over 2,000 of them left to look for jobs elsewhere.

Huamao village is now full of vitality. It is home to seven rural hotels, 13 agritainment facilities, a pottery-themed street, and some cooperatives. Last year, the village attracted more than 880,000 tourists, and with the per capita disposable income of villagers having meanwhile reached 21,864 yuan (about $3,181.7). 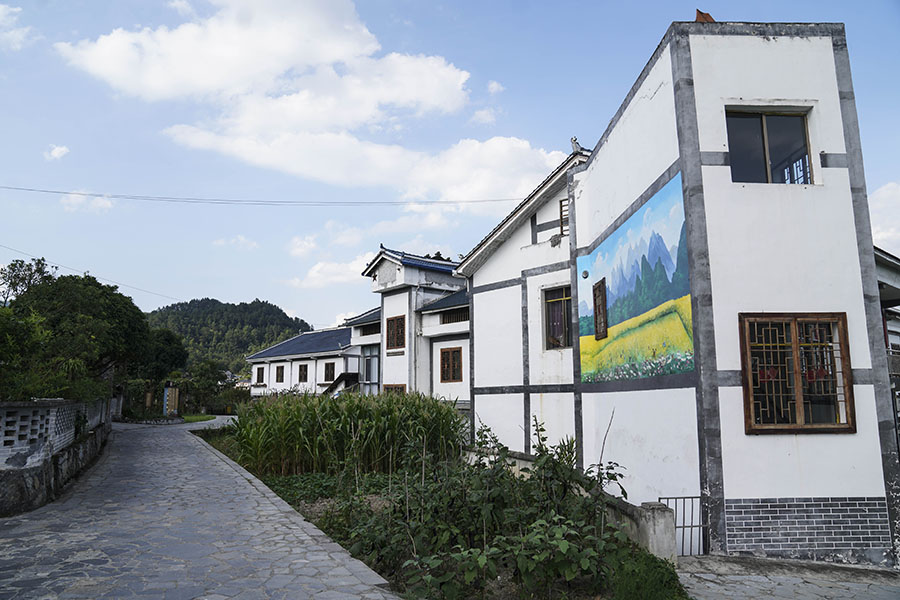 Like Zhang, many young people have returned to their hometowns in search of nostalgia. Employees working at Zhang's workshop include Luo Jiyan, who was once a migrant worker. 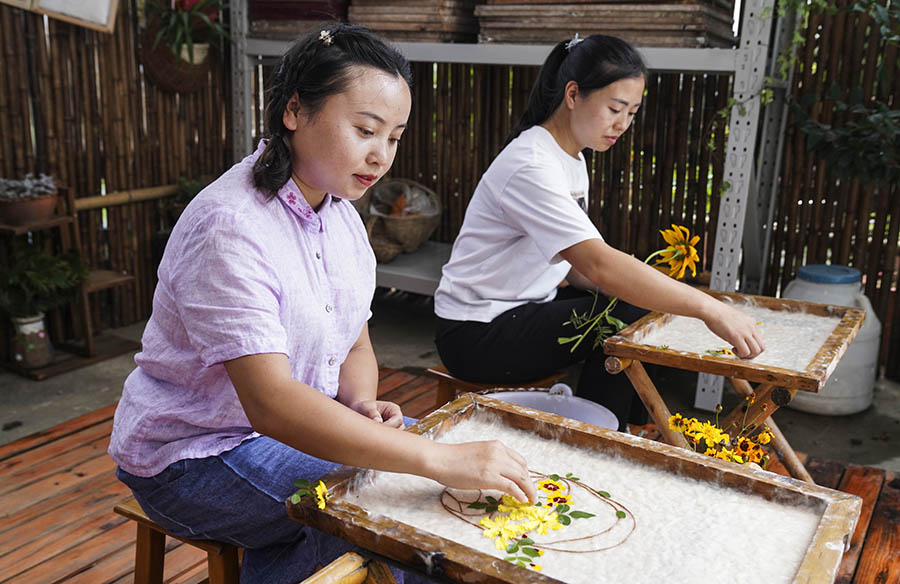 Witnessing the thriving rural tourism industry in the village, Luo began to learn the ancient papermaking technique at Zhang’s workshop two years ago. Luo said she cherished the opportunity to learn skills and make money near her home while taking care of her children. More importantly, at the workshop, she has the ambition to carry forward the ancient papermaking craft.

Promoting rural revitalization was also one of Zhang's goals when she returned to her hometown to start a business. Back in 2015, Zhang, who was touched by Xi’s remarks about nostalgia, continued to observe the news regarding Xi listening to work report from the provincial Party committee and the provincial government during his inspection in Guizhou. Xi pointed out that the government must take particular care of the left-behind children and the elderly. These words resonated with Zhang, who had already been successful in the brewing industry. She thought that there are more positive things worth doing in her hometown.

Today, Zhang believes that rural revitalization will not just be empty talk, but through improving cultural self - confidence, it will make a significant difference to helping people in her hometown.