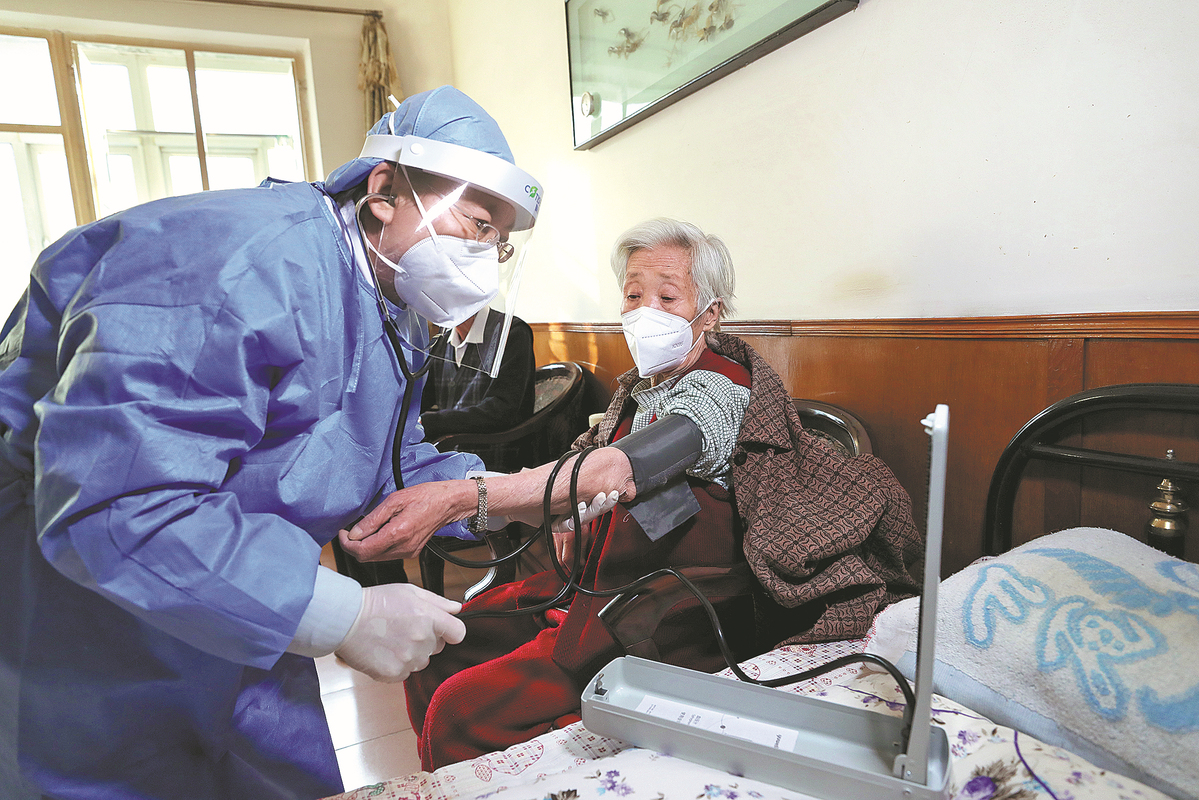 A medical worker checks the blood pressure of an elderly woman at her home in Chaoyang district, Beijing, on Wednesday to make sure it's safe for her to get vaccinated. Community medical centers in Chaoyang have been taking telephone bookings for free door-to-door vaccinations for the elderly. LEI BINBIN/FOR CHINA DAILY

For three years, government has acted on science in virus prevention, control

China's decisions to cut many long-standing COVID-19 restrictions in November and downgrade the management of the virus from Jan 8 were consistent with its previous actions in refining COVID-19 response measures to handle emerging challenges, according to experts.

The regulatory changes — including abandoning the circuit breaker mechanism for inbound flights and further shortening the time that international arrivals had to spend at isolation hotels — kick-started a cascade of changes. Before the end of the year, China had stopped tracing COVID-19 cases and allowed patients to isolate at home.

Testing requirements were cut for everyday scenarios, such as taking the subway, dining at restaurants and traveling out of town. Fitness clubs, karaoke bars and other entertainment venues were allowed to resume business. From Jan 8, inbound travelers will no longer have to undergo quarantine or take a nucleic acid test upon arrival.

Some Western media outlets have called the reforms an "abrupt and dramatic" turnabout.

However, the accusations "ignored the fact that China has changed its response strategy based on a comprehensive assessment of the mutation of the virus, the COVID situation and ongoing response efforts", Xinhua News Agency said in a commentary on Dec 30.

During the fight against COVID-19, China has effectively coordinated its COVID response with economic and social development, and refined the response policy in light of the evolving situation, it said.

At multiple news conferences and on other occasions, China's top health officials and experts have maintained that its COVID response had been modified constantly ever since the outset of the pandemic.

At a meeting with health officials on Nov 11, Vice-Premier Sun Chunlan described the rollout of the 20 measures as one of many "small but non-stop steps" taken over the years to optimize COVID control. The phrase has since been employed by many health officials to explain the dynamics of how China's COVID strategy evolved.

Multiple changes to COVID control rules in a short period — as were the case in the recent adjustments-were not uncommon. Since Feb 2020, China has rolled out a total of nine editions of epidemic control plans to guide frontline workers. However, the first six of them were published in tandem in slightly more than a month between Feb 1 and March 7 in 2020, when understanding of the virus was still murky and few clinical data were available. The updates slowed as control expertise accumulated. The seventh edition was not published until September, 2020.

The eighth and the ninth editions came in May, 2021, and June of last year, respectively.

A Beijing News report analyzing the evolution of the country's control strategies said changes to the last few editions of the plan were more reflective of the experience and lessons the control task force learned on the ground. For example, the eighth edition ramped up scrutiny over freight after more domestic outbreaks were traced back to workers in cold-chain logistics. The ninth, however, placed more emphasis on minimizing the duration, cost and scale of lockdowns and made control more precise, as the ever-elusive Omicron subvariants triggered more frequent and lengthier restrictions.

The continuous refining of the control methodologies has helped the country "effectively respond to five global COVID waves and avoid widespread infections with the original strain and the Delta variant, which are relatively more pathogenic than the other variants", Xinhua said.

China has worked over the past three years to bolster the inoculation rate, including among vulnerable groups such as older adults. Official data showed that around 239.4 million, or 90.6 percent, of people aged 60 and older had received at least one shot by Nov 28. About 228.1 million, or 86.4 percent had received two shots and about 181.5 million had received a booster shot. To reduce the impact of having fewer restrictions on the elderly, China is working to raise the group's inoculation rate further. Measures including "express channels" for the elderly have been adopted in different places.

Xinhua said instead of "squandering the time" as some Western media reported, China in the past three years has developed effective COVID-19 diagnosis and treatment expertise and medicines, and kept improving its capacities in terms of medical treatment, pathogen detection and epidemiological investigation.

In sync with the current situation, China is shoring up the output of medicine, masks, vaccines and other medical supplies. It has also accelerated efforts to expand the capacity of fever clinics and intensive care units at medical institutions.

In a recent interview, Liang Wannian, head of the COVID-19 response expert panel of the National Health Commission, voiced his disagreement over defining the new adjustment as "laissez-faire". He said Chinese people are facing up to the epidemic together with the government.